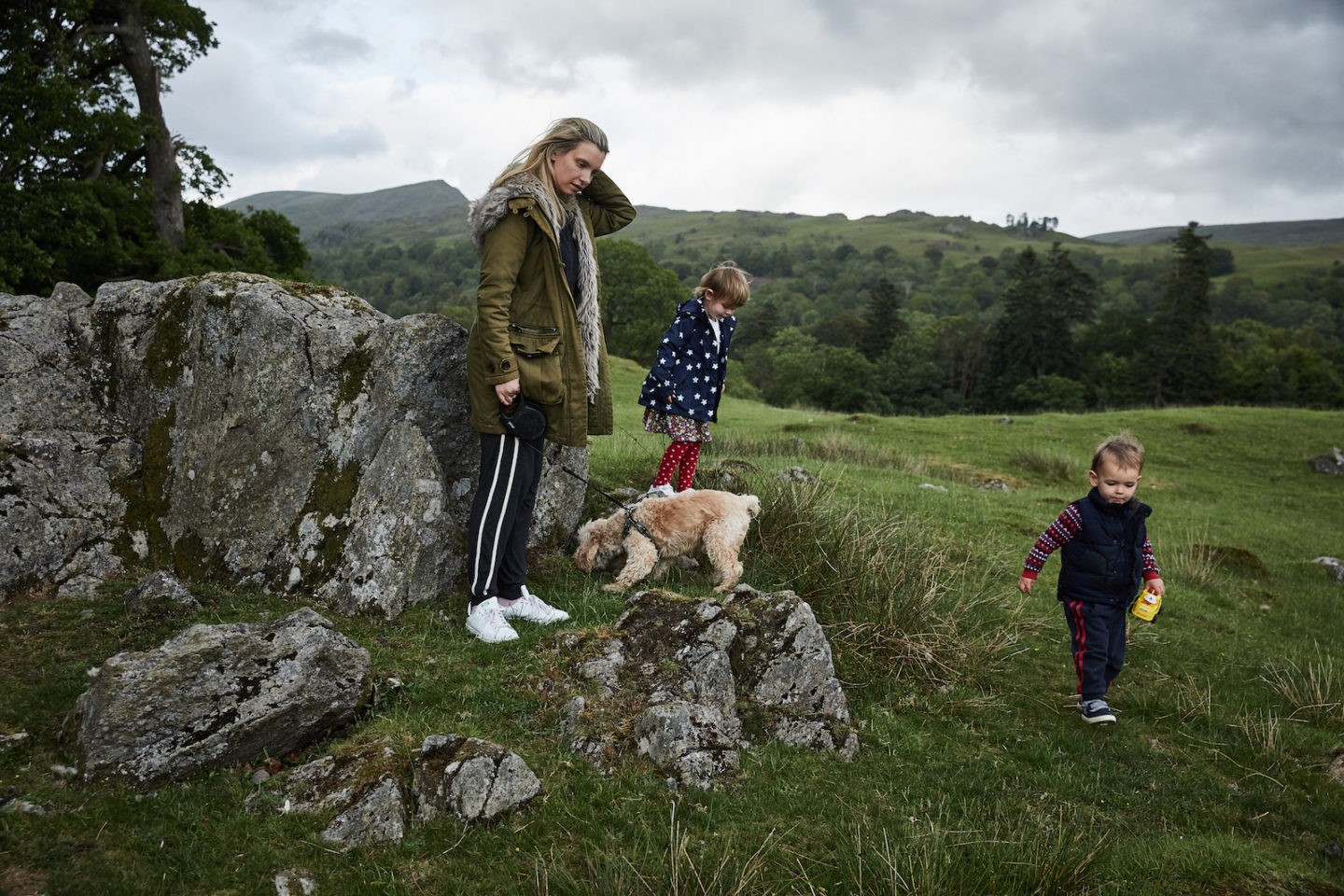 I always have such good intentions for this monthly life update post (in fact even writing the first part of this sentence seems very deja vu), but however hard I try to do things in advance I always end up compiling it at the nth hour on the 3rd day of the month. (It has been on the 3rd day of the month since Ted was born; before that it was the 17th of every month, Angelica’s birthday. I have never failed to publish my post before midnight on the right day – I’m borderline superstitious about it now.)

Many people would have thrown out the whole “stick to the same date every month” rule years ago, no doubt finding it ridiculously restrictive and unnecessarily stressful. But I seem to be at my most productive when life is ridiculously restrictive and unnecessarily stressful so go figure – if I didn’t have a set date for my life updates then you probably wouldn’t be reading these very words. I’d just never get around to it, like my cookery videos and the post about sunscreens that’s been languishing in drafts since May 2013.

(By the way, if you want to catch up on all of the life updates – and there are almost four years’ worth now – then you can find them by clicking here and browsing backwards to reach the older posts.)

After that semi-apologetic introduction, which is now pretty much mandatory, let’s get down to business. Or pleasure. Or a mixture of both. I can tell you what hasn’t been a pleasure and that is the twelve days (and counting) of suffering from minor ailments that have been popping up with almost comical regularity. It’s become a standing joke, almost, that every morning brings a new gripe and I can’t tell whether I’m missing some sort of vital nutrient or mineral and need urgent fixing or if this is just what it feels like to get older.

Do I moan and demand that the GP takes my ailments seriously (“but how do you know that my stomach acid isn’t something to do with my eye strain and my running nose and they’re not all related and I have one great big super-illness?”) or do I moan (default setting) and accept that multiple ailments, aches and pains are just an inconvenient way of life. And be grateful that I’m generally well. And alive.

I mean I am always acutely grateful to be alive and not have any serious illness or disease – I’m actually very mindful of checking myself in that respect and reminding myself that every day is an absolute blessing, but by God it’s hard to keep perspective when you can’t breathe through your nose, isn’t it? If there’s one thing that makes me furious with the world it’s a blocked-up nose. Few things are more cruel. Being forced to mouth-breathe through the night, as the inside of your throat dries into something resembling an ancient piece of parchment from Caesar’s journal and then feels as though it’s been set alight, is one of life’s great injustices. Why someone hasn’t invented a sort of irrigation/misting system for the mouth I do not know; a little tube, perhaps, that just spritzes the tongue and throat with water when you have a cold – or better still, a glycerin/honey kind of affair that stops tickly coughs in their path and provides lubrication.

Anyway, the toothache/headache/stomachache/bottomache/throatache/cough has been exhausting and I would just like a whole week off. To reset. Preferably somewhere hot but not too hot (Greece? Spain?) and with a kids’ club run by Mary Poppins. Or the Greek/Spanish equivalent. Maria Haciendo Estallar. (Google translate has possibly let me down there.) 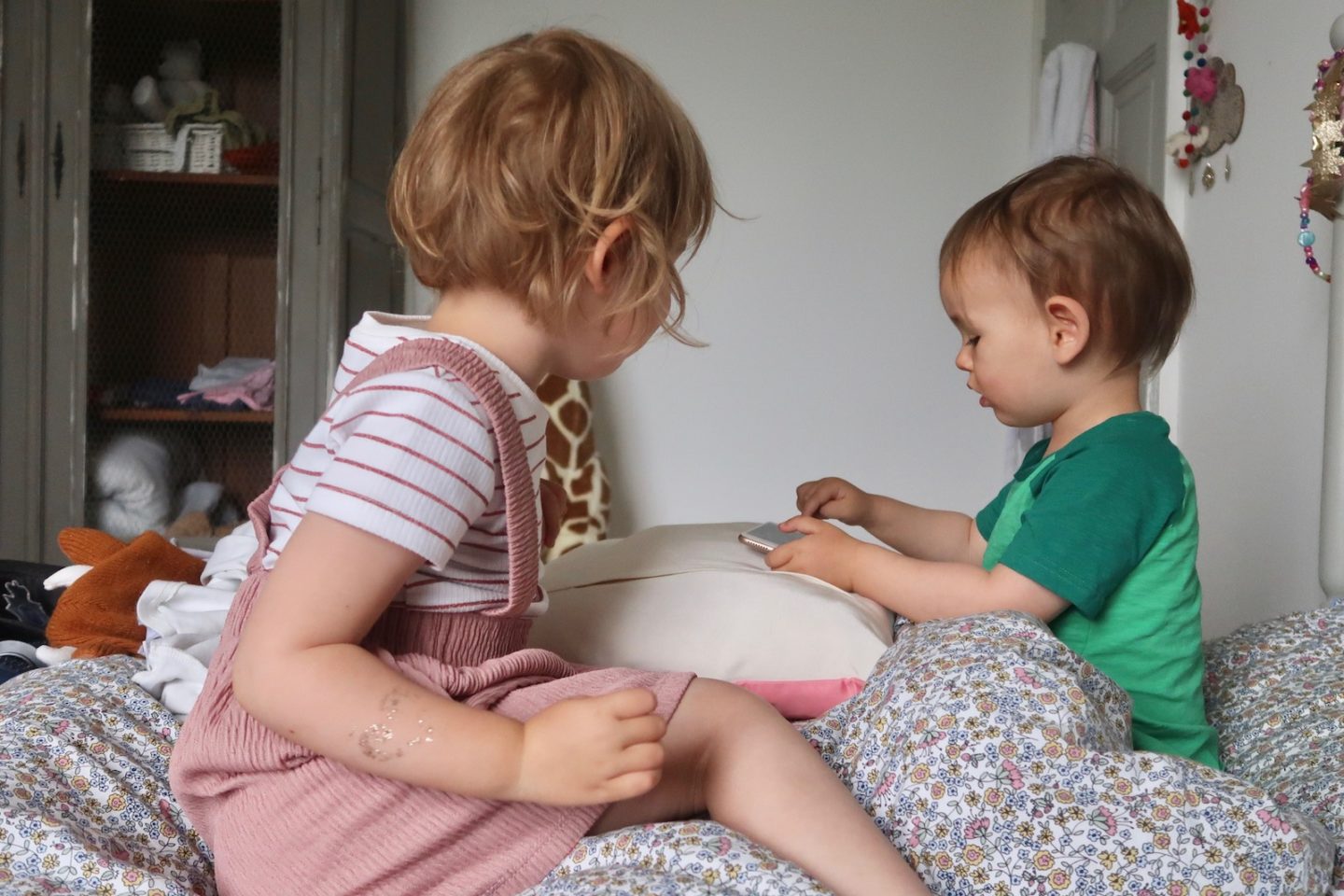 But enough of me, I must leave some time to talk about Headstrong Ted (two years and four months old) and Pre-Teen Angelica (turning four in a couple of weeks). They are chatting away to one another now, Angelica in perfect, surprisingly crisp English and Ted in his own strange little alien language that likes to elongate vowels and completely miss off the beginning consonants from words. “Ooooo!” is zoo. “Armer!” is farmer. “Iraffe!” is giraffe. But we now have sentences, sort of, or at least the seeds of sentences – the intention’s all there. 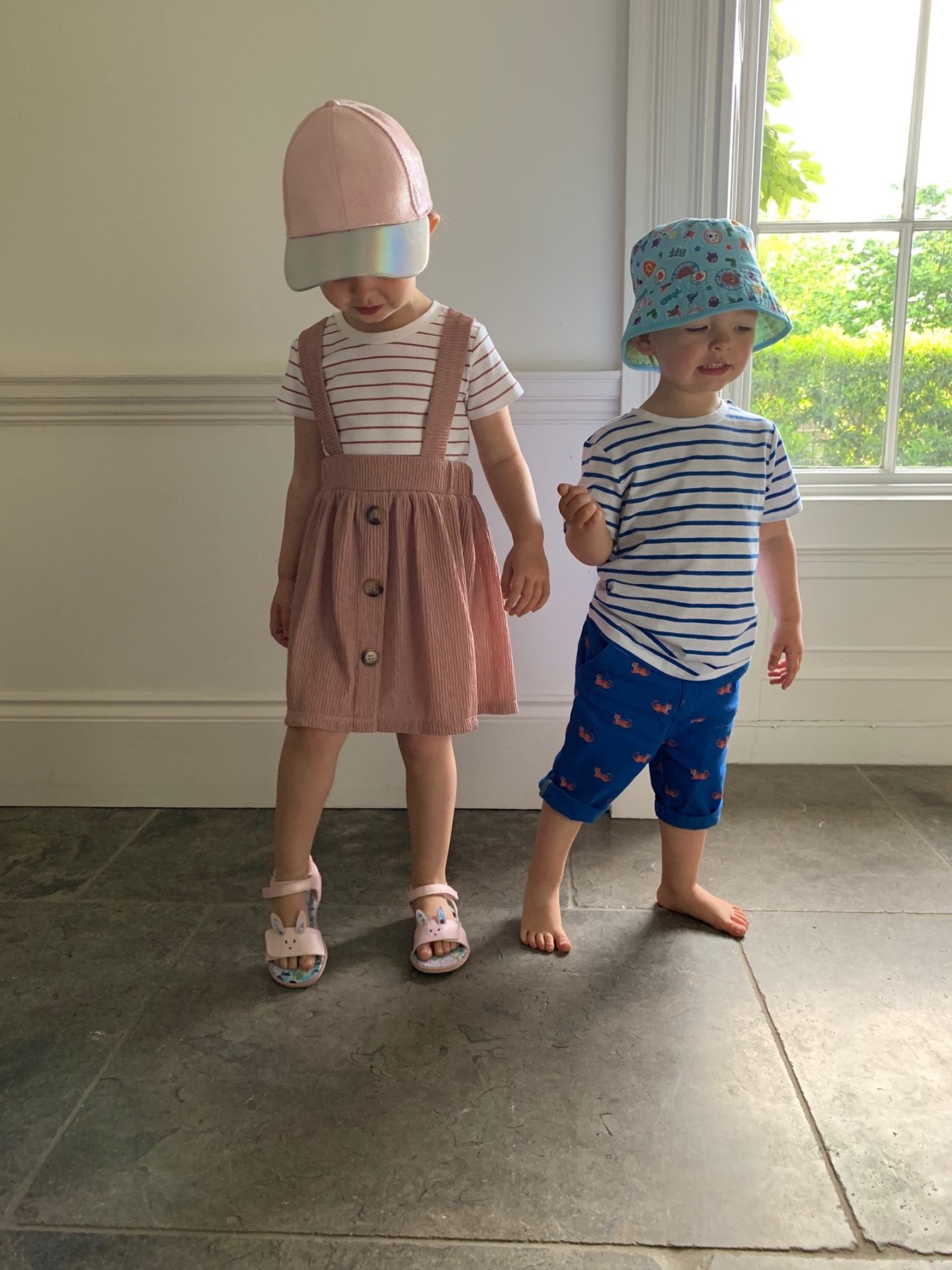 Apple is “pull”. Snack is “ack” and baby is “dee dee”. And all of this is monumentally boring to other people so I can’t quite believe I’m writing it. Next I’ll be telling you about the knee operation that my Mum’s brother-in-law’s friend had before Christmas and how he’ll always set off the beeper at the airport. I am turning into the woman I always dreaded, though I haven’t started wearing fleece tops or saving eggshells. Why do people save eggshells? I want to say it’s something to do with slugs but I’ve had a large glass of quite a fine Chianti (no fava beans!) and my brain has gone soft. 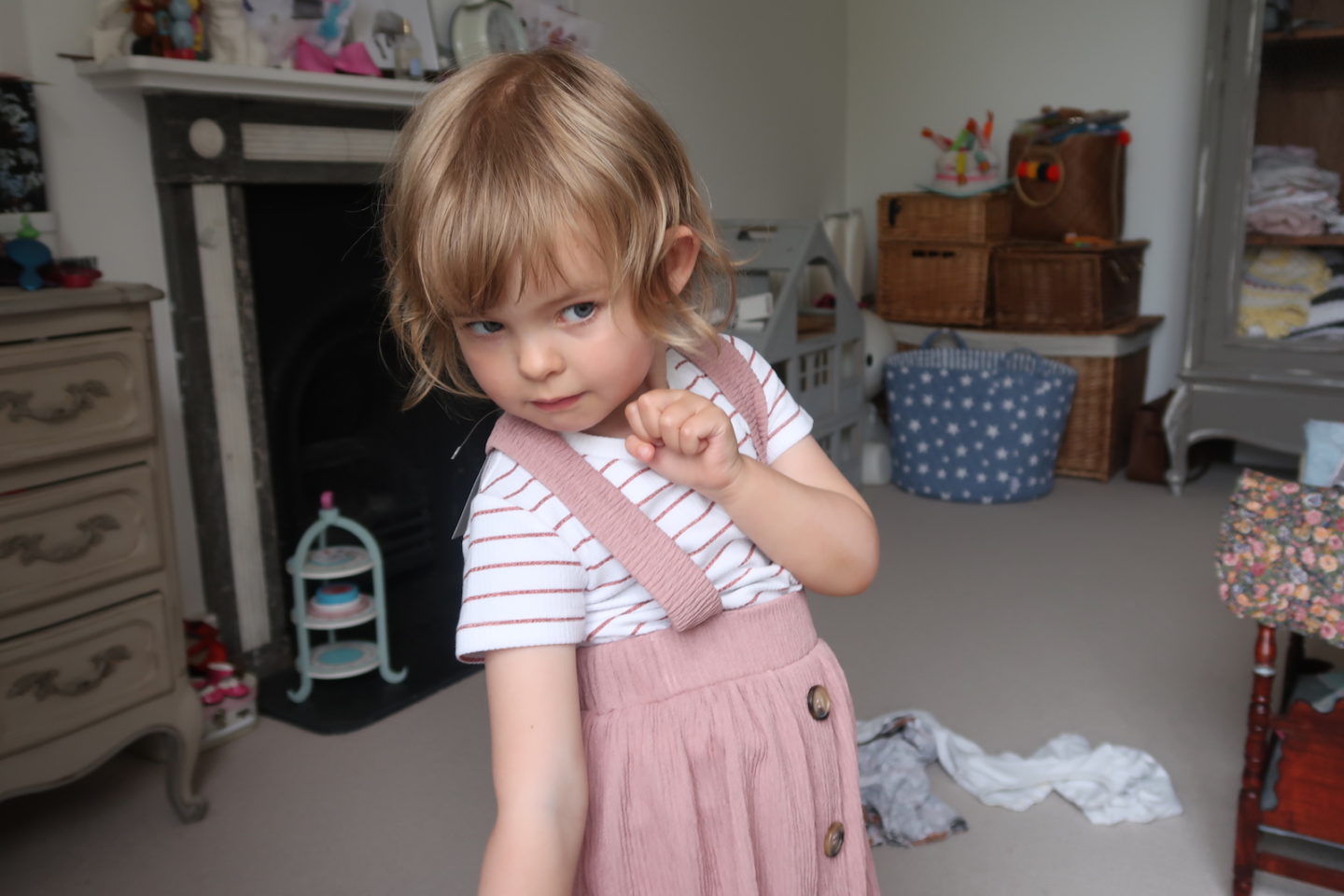 Oh but I do have to tell you about my favourite Angelica-isms. Can I? I promise I’ll be quick. She now  understands just about everything so I rarely have to stop to explain – in fact a lot of the time she can tell if I’m oversimplifying things for her and she pulls me up on it. So it makes it even funnier when she gets things wrong. My favourite is this one:

“Mummy I’m going to paint my face but not poke the brush in my eye bulbs.”

Eye bulbs! I think I prefer eyebulbs to eyeballs – I may adopt it. At any rate I can’t bear to correct her because it’s so sweet. She still says coldsnore for coleslaw, and then there’s the one that had me in stitches the other day: Muffin Puppets. Guess what Muffin Puppets are? She was desperate to watch a film we had saved on Amazon Prime and it was about Christmas with the Muffin Puppets. I had absolutely no idea what she was on about. “You know Mummy, the Muffin Puppets at Christmas. With Scrooge.”

She was talking about the Muppets. Muffin Puppets!

If someone doesn’t form a band and call it that I’ll be very upset. Maybe Angelica should form a band – her and Ted are becoming quite the duo when it comes to singing their little ditties and putting on dance performances. Granted, Ted just sort of spins about on the spot and then falls over, but Angelica is full-on Sylvia Young jazz-hand material. She even introduces herself in a (slightly creepy) man’s voice before she begins her show. “Ladies and Gentlemen, my performance is about to begin.” 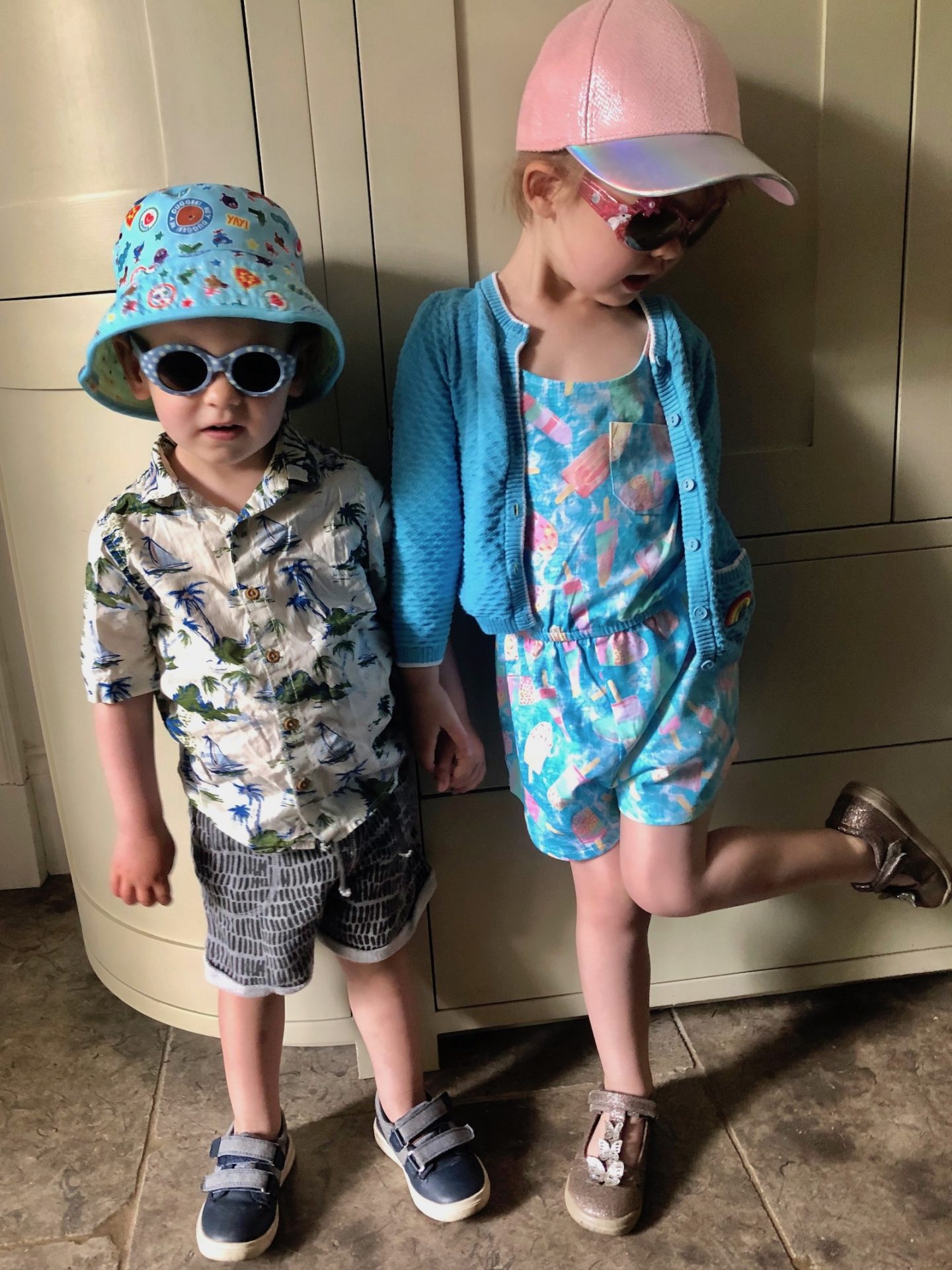 One of the things that I wanted to write about this month was how intense it was all becoming, looking after two small kids. Sometimes I feel as though we’re on a treadmill and it’s stuck on the highest setting and we just can’t stop running, you can’t even shift your gaze to the control panel to find the slow-down button, let alone reach a hand towards it.  You’re desperate for someone capable to lean over and adjust the speed, give you some breathing space, but it’s relentless. I thought that the newborn phase was hard, and it is, but for such different reasons. Because it’s new, because you don’t sleep, because your brain and body are completely mangled. But then they get older and the guilt becomes a thing, and you have to try and navigate your way through disciplining and educating and trying to instil in them the values and behavioural traits that you find acceptable and it’s a BLOODY MINEFIELD!

Why is there not a course on this? Parenting? I mean for the love of God! You learn about algebra (haven’t needed it once) and you learn how to read maps (hello? Sat nav?!) and you do classes on 1066 at Hastings and the six wives of Henry VIII and all sorts of things that are inarguably interesting; but surely there should be some basic bits and pieces on kids? Like what you should do when you shout at them and they just laugh in your face, or what to do when NO, NO, I SAID NO! doesn’t work, or how to get yourself out of the black hole of doom that is the “using ice cream and treats as bribes for good behaviour” hole. 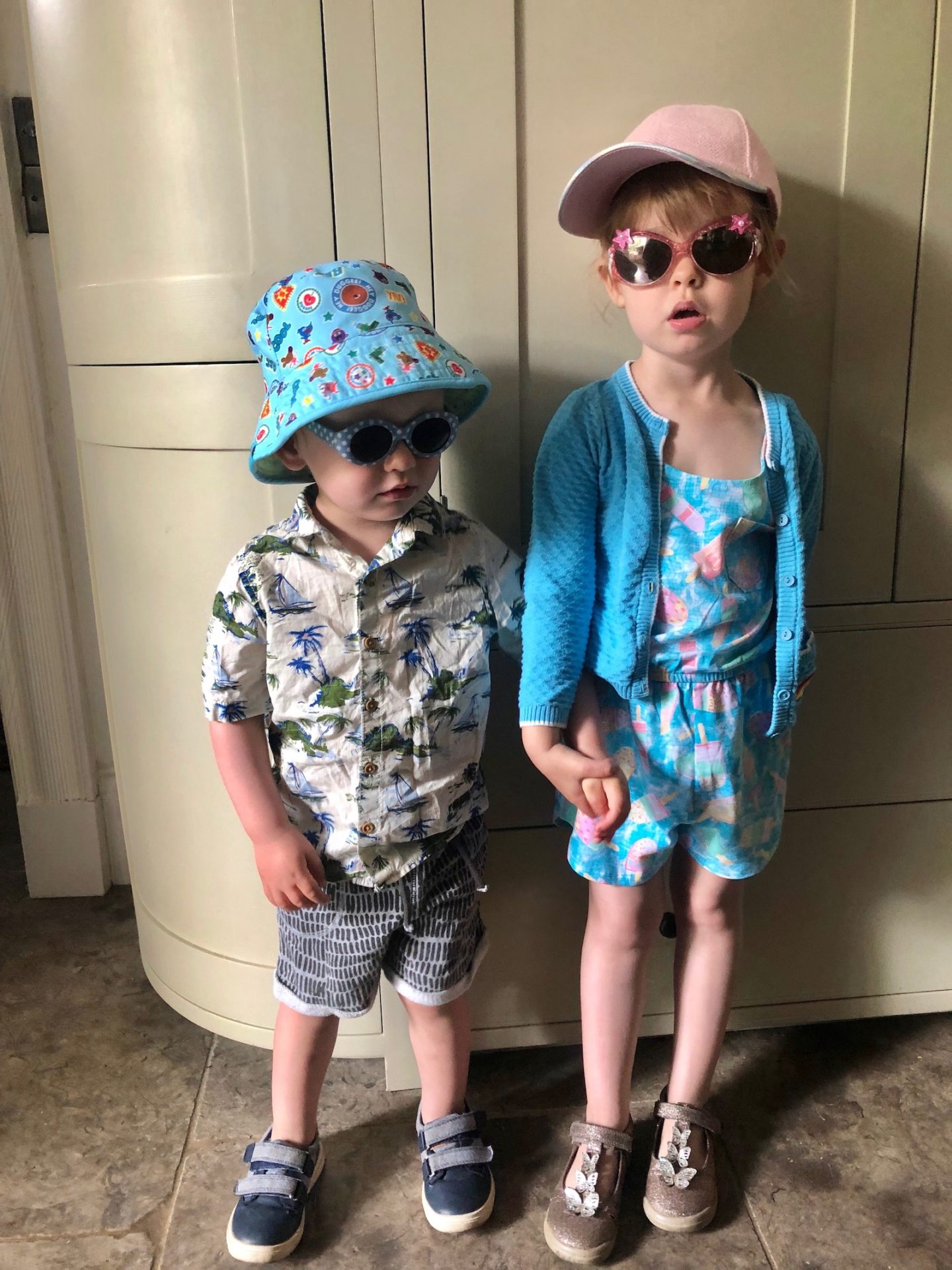 I’m sure it’s all basic psychology, but it’s the sort of stuff I needed drilled into me from teen years onwards; I don’t have the energy to learn it all now. It needed to be second nature. If I took my eye off the ball for long enough to read up about parenting now, the cat would probably have been shoved into the oven and the walls would be bright green with bits of dried pasta glued all over them. And we’d have no floor, because Ted would have picked the lock on the cupboard with the cleaning products in, managed to mix two highly flammable solutions together and blown a hole in the ground. All in the space of nineteen seconds, which is the time frame in which he can achieve pretty much anything, including climbing two flights of stairs, mounting a window sill ledge and unlatching a window that requires the skill and dexterity of a professional bank robber.

Right, I’m onto my second glass of red which is almost unheard of for me, but it has been a testing kind of week(s). Not that I’m going to make a habit of it – two glasses and I’m a felled woman the following day, I can barely tie my shoelaces. But I have a new book to read and it’s a sort of biography and I feel that it calls for slight tipsiness and perhaps some light weeping. I’m too embarrassed to tell you what the book is at the moment, it’s a daft sort of thing, but I do feel a separate post coming on. I have a weird connection with the woman in question – perhaps it’s a nostalgia thing – so I’m really looking forward to curling up and getting stuck in.

On that mysterious note, I bid you all farewell until later on in the week, which is how long it will take me to recover from my two glasses of wine! So it’s goodnight (or morning, depending on when you’re reading) from me and goodnight from the Muffin Puppets – if you have any funny malapropisms of your own then please do pop them into the comments below. They don’t even have to be kid ones – my parents still call memory foam mattresses the “Tempura Mattress”.