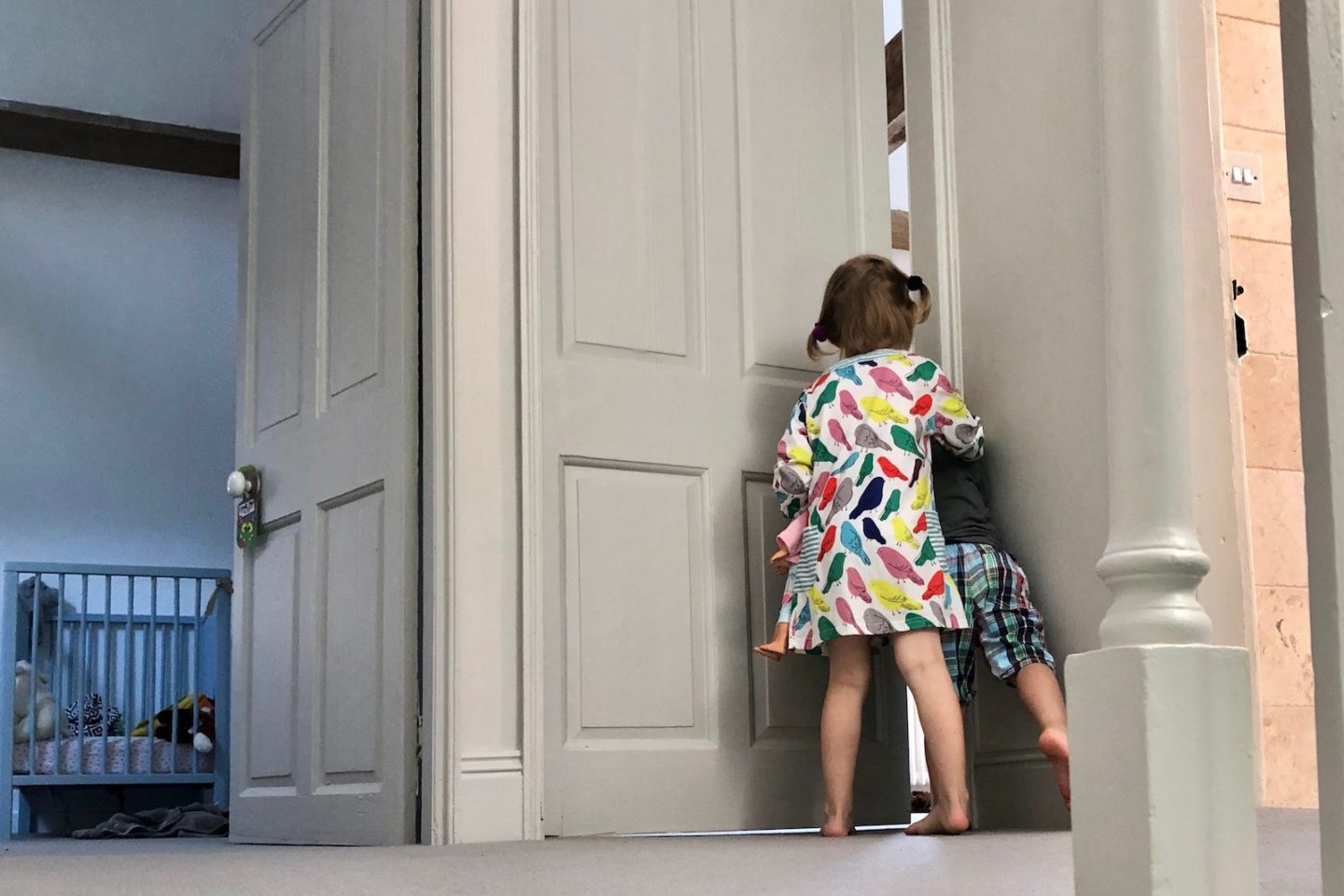 Angelica starts school tomorrow, but I tell you what feels most weird about today, which is officially known as First Day Of School Eve: the fact that I’m not writing my monthly update in a panic at ten minutes to midnight! Yes that’s right, my friends, I’m actually writing this in daylight – everyone is up and about and bustling around the house, the doorbell keeps ringing and the dog keeps barking and in the distance I can hear a lorry trying to drive beneath a tunnel of low-hanging tree branches. Crunchhhhh-crackkkk-bang. Gets them every time!

I have to write this now because later on this evening I am back to the unending trauma of launching an app and all of the complicated administrative issues that it throws up. I now know things about servers and databases and cname records that I had no intention of ever knowing; I was quite happy being completely oblivious to the workings of a Virtual Private Server, I was content with my naivety regarding the screenshot upload requirements for submitting an app to the App Store. I didn’t ever picture myself researching content management systems for nine hours straight, or having to sit on Live Chat with a tech “helper” (not helping) for forty-five minutes at a time. 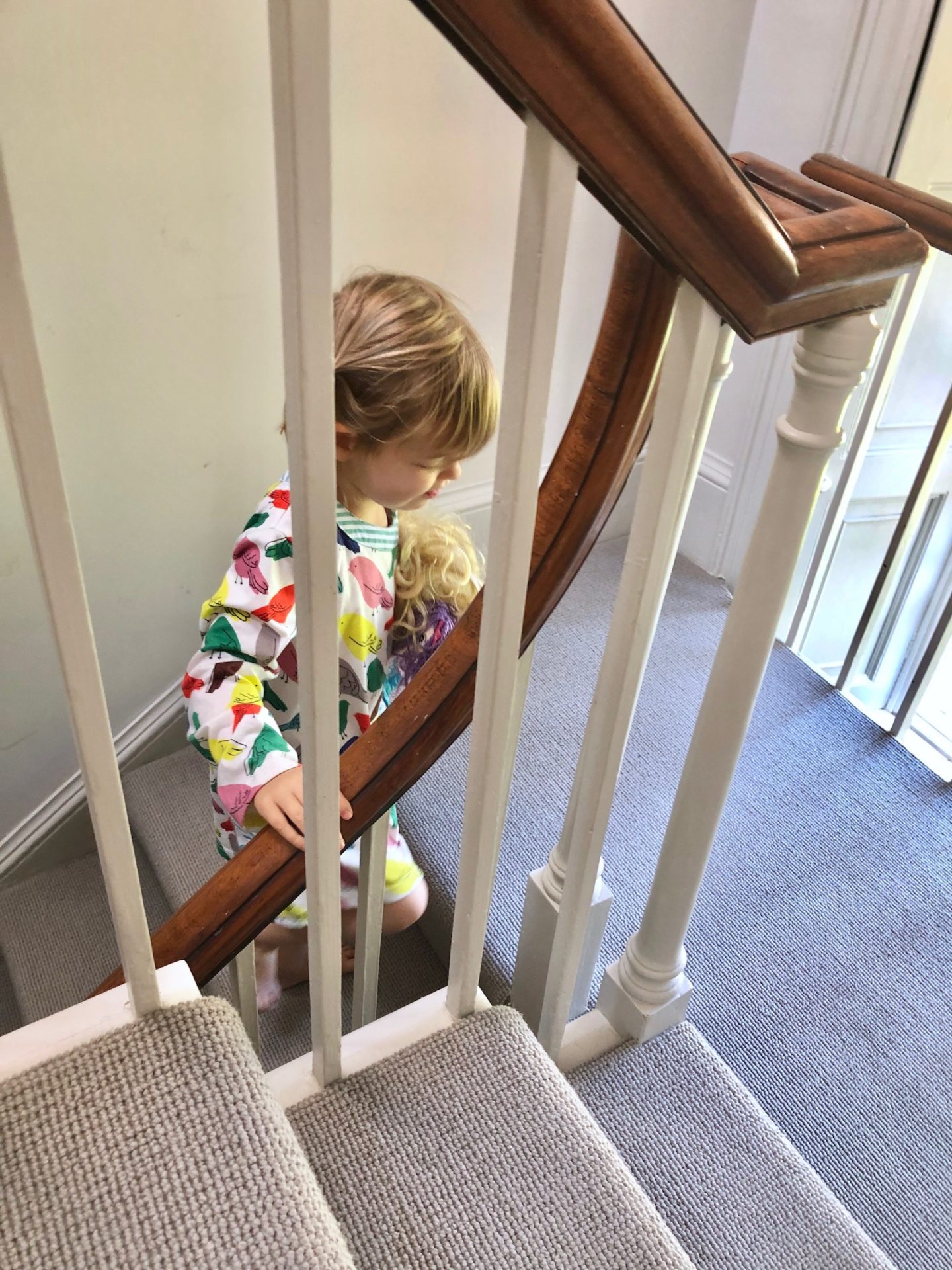 Silver lining: the app stuff has occupied me so thoroughly, I’ve not really had much of a chance to mope around about the school thing. The truth is, Angelica is well ready for school – I can almost sense the boredom, sometimes, when I suggest that we play shops or pretend to be hotel keepers. (I don’t know where these role-play themes came from, but I’m brilliant as both a hotelier and a shop-keeper, if I may be so bold as to blow my own proverbial trumpet. Never has a hotel manager been quite so thorough in their checking-in procedure and never has one been so quick-witted when it comes to accommodating odd requests. Cages for eighteen dragons? A room for a wizard who likes to sleep in the same bed as his brother and only wears socks to bed? I don’t even blink, me. I should have been a royal butler.)

So she’s getting bored at home, sometimes, and I think that school will be just the most exciting thing that’s ever happened. And if she’s excited then I am too. When I really think about the whole starting school situation, the part that makes me uncomfortable can be mostly written off as pure nostalgia and sentimentality – “my baby! Oh, my baby!” I can hear myself wail, in a parallel universe blog post that’s written after half a bottle of red wine. My Baby Leaves Me;  Is This The End Of The Era?; Why I’m Terrified Of Letting Her Go. All of those titles perfectly summarise how I’m feeling about the school days – I am terrified of the whole growing up, growing apart thing, and it is the end of the baby era – but those are my issues and I haven’t had the time to dwell on them, which I personally think is quite fortunate.

If Angelica had her own worries (we’ve talked about school a lot) then that would be a different matter and I would have devoted my energies towards making her happy and confident, but in truth (and this is slightly painful, in a “I’m not needed” kind of way) she’s absolutely raring to go. Tiny shoes and pinafore dress and all. The fact that the dress came with a matching grey scrunchie made her almost apoplectic with joy, even though she still doesn’t really have enough hair to put into one. 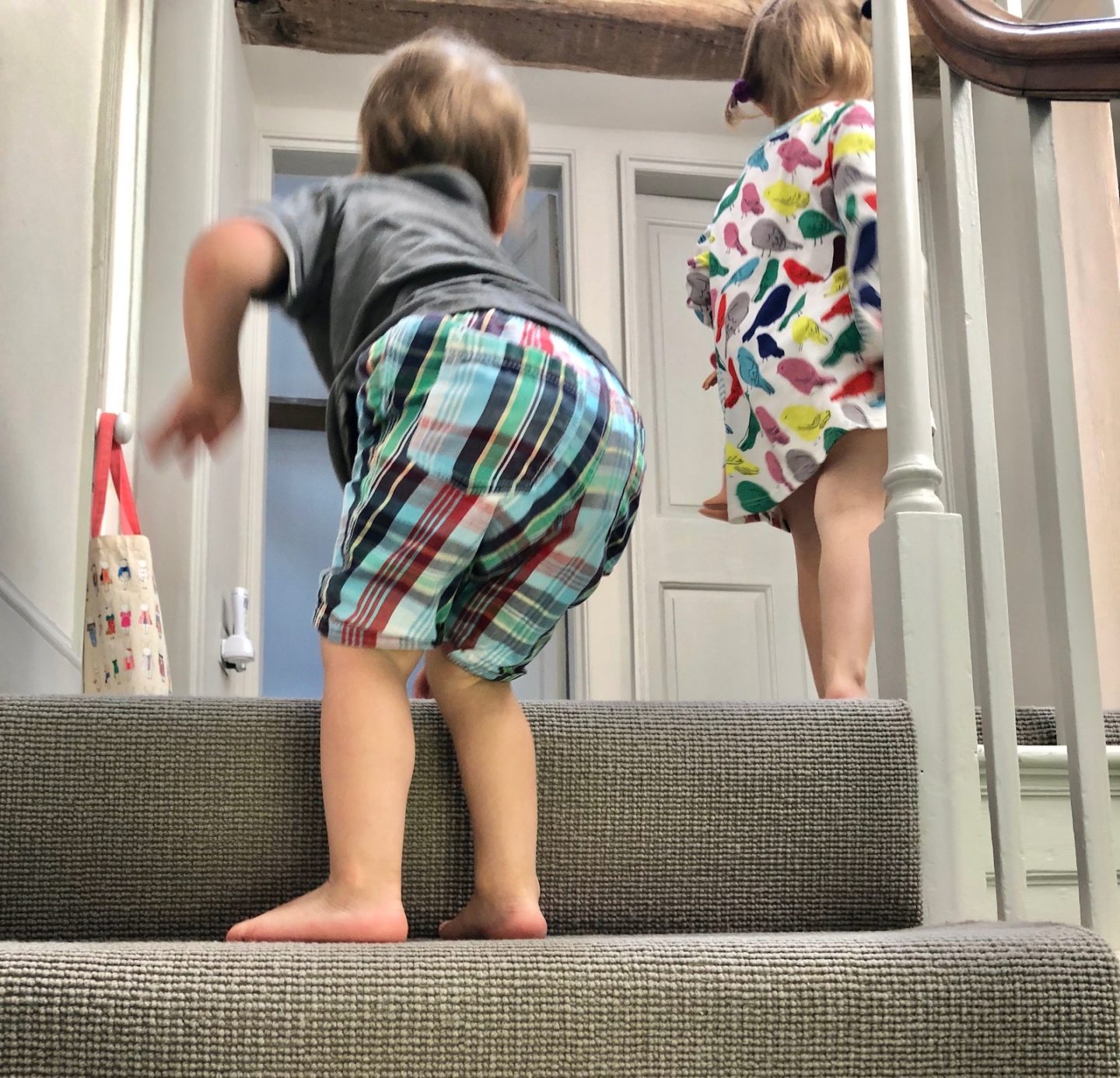 Both babies have baby hair. Actually, as I type this, they are downstairs being prepared for the visit to the hair salon – Angelica’s third visit, Ted’s first ever! Ted looks like a crazed old man who has been living on a mountain for eighty years, wispy mullet at the back and hair so long on top that he looks as though he’s trying to mimic a combover. Angelica’s hair is much more in-shape, but I thought it would be nice – and special – to have a day-before-school trim and style.

I did intend to make this a massively sentimental, gushing piece about how time flies and you have to appreciate each moment as it comes, but halfway through drafting out my (vaguely annoying) stream of consciousness I realised that I already appreciate each moment. It doesn’t stop time flying. And anyway, what a privilege for time to fly and to witness your child growing bigger and stronger. It’s a privilege denied to many and I thought for many years that it would never be my privilege, yet here I am, holding a pair of patent black shoes and showing a (just) four year old how to put a pinafore dress on without runkling up the shirt beneath. (Hand up the skirt, pull on the hem of the top – how long is it since you’ve had to do that manoeuvre?)

Then Ted starts nursery next week, just for a few hours, so that’s another milestone. No uniform, though, which is partly what tugs the old heart strings when it comes to the school thing, isn’t it? They suddenly look like miniature pretend adults. 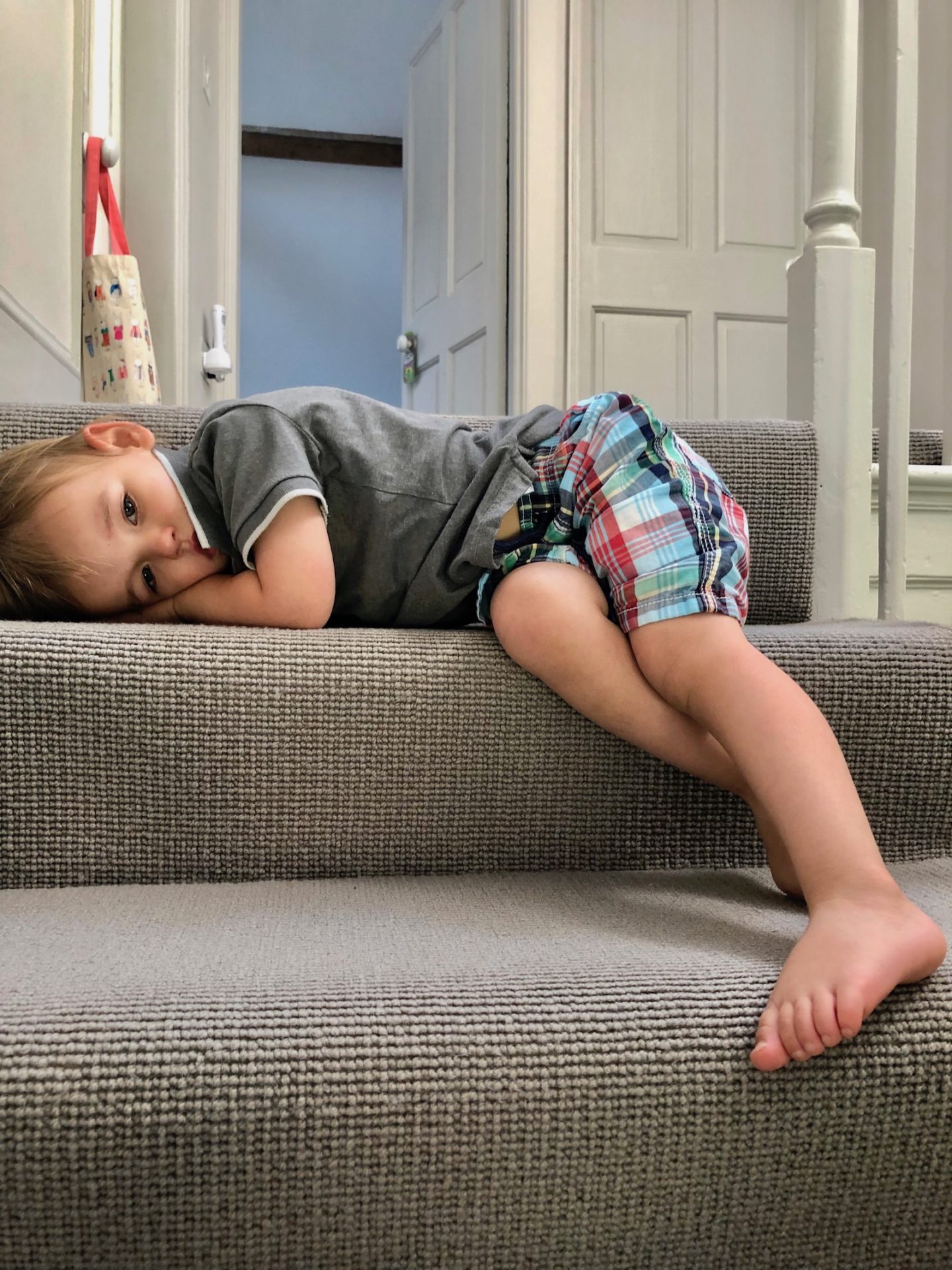 I had loads of other things to tell you this month, but I think that the school-starting subject trumps all else, don’t you? I was going to tell you an entire short story about Ted and Angelica’s “sneaking” game, which basically consists of them really badly sneaking up on people and the people being sneaked upon having to pretend to be surprised. (See top photo.) I could write about Ted’s weird performance art dance moves that he’s started doing (he pulls abstract shapes and then holds them for seconds at a time, with a really serious look on his face) or I could tell you about Angelica’s new-found ability to do a forward roll, but school really overshadows any other development this month.

I’m being all blasé and flippant about it, I know, and I can guarantee you I’ll be the one uncontrollably sobbing at the gates tomorrow. I’ll update you. I mean I cry quite easily – it’s as though my tear ducts were connected the wrong way around or something – so tomorrow is bound to be a weep fest.

Weep Fest! Now that’s an idea for a lucrative summer event. £140 per weekend camping ticket, doesn’t matter if it rains because you’ll be depressed anyway. And soaked.

Does anyone else have school starters? How are you feeling? How are they feeling? 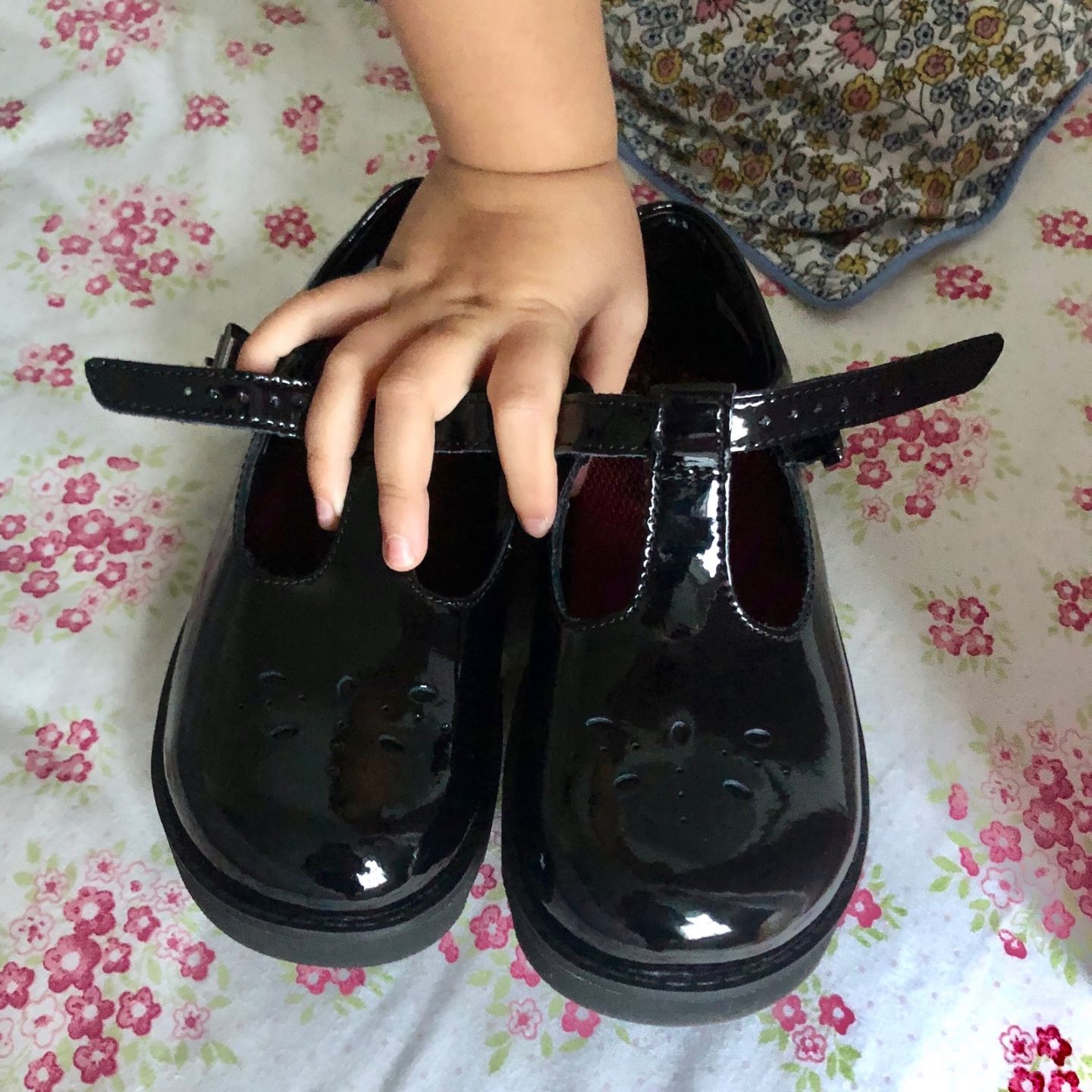