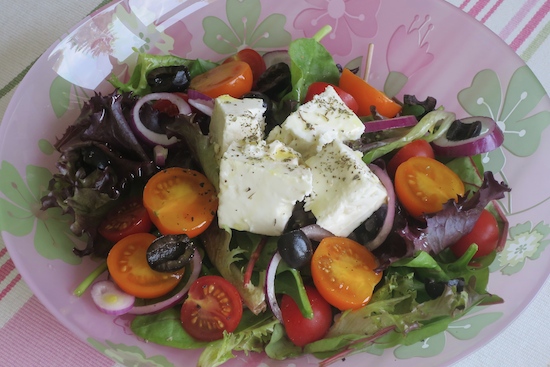 Not really a recipe, more an idea. A passing thought. Namely: how amazing is a Greek salad when you haven’t had one in a while? I get sick of feta cheese very easily, especially when I go to Greece on holiday and have it for virtually every meal, but after a bit of a feta hiatus I do enjoy getting reacquainted with it, and I revel in its saltiness against a heap of juicy tomatoes and bitter olives. It’s such an easy, fresh and summery salad and it requires very little in the way of advance thought; packs of feta cheese last for months in the fridge and the rest of the ingredients are pretty run-of-the-mill.

Here I’ve simply halved a pack of feta and broken it with my hands over a salad of leaves, cherry tomatoes, black olives and finely sliced red onion. For me, the red onion is non-negotiable; it adds the bite and excitement that the salad otherwise cries out for. I soak the fine onion slices for a while in some lemon juice, if I remember, which makes them a bit less acidic and burny on the old gullet. Cucumber? I can take it or leave it – usually I leave it. Unless I remember, at the same time that I do the onions, to slice the cucumber lengthways, remove the watery seedy bit and then salt the pieces. Not too much salt, mind – the feta is a salt-fest enough on its own!

The dressing here was a quick mixture of red wine vinegar and very good olive oil, some might prefer lemon juice and olive oil – I’ve had loads of variations, both in Greece and elsewhere. I sprinkle a little dried oregano over the feta, just to give things a more authentic touch, and I like to season with a few grinds of black pepper.

Note: go for a quality feta, not those weird cubes-in-oil that are of dubious origin! And if you seriously like feta then there are loads of feta-worshipping recipes in the Medicinal Chef cookbook that I keep banging on about. It really is a good one – you can find it here. If you hate feta (Mr AMR isn’t too keen) then you could swap for goat’s cheese, but I’d personally also alter the dressing and mix the olive oil with balsamic vinegar rather than red wine. It’s no longer anything like a “Greek Salad” but it’s very tasty.