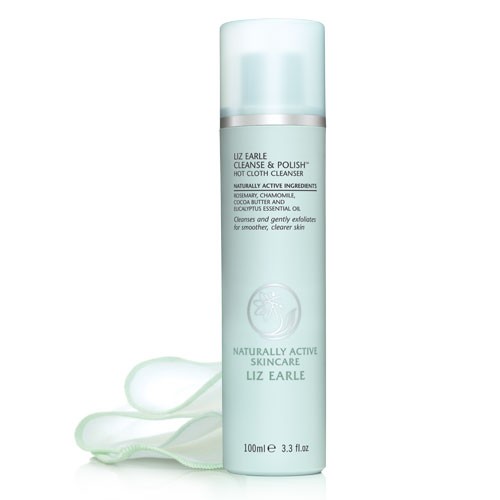 Out of all my beauty products, Liz Earle’s Cleanse and Polish is the one that I use most often. There. I said it. Now: I can sense mutiny in the ranks – there are screams of “WHAT? She tells us this now after six months of loyal readership? What the devil is the girl playing at?” and bitter whispers of “she’s keeping all the best secrets to herself!“

I can but apologise. The problem was, you see, that so many people have written about Cleanse and Polish on the internet and in magazines that I didn’t know quite how to introduce it in a new and interesting way. I thought long and hard every month – would I do a video demonstration? Would I cover half my face in Cleanse and Polish and the other half in a competitor’s formula and show the differences? Could I find a new, slightly off-the-wall way of applying it? Use it as a body wash? Shampoo? Foot mask?

In the end, I decided to do none of the above and just come straight out with the truth: I LOVE Liz Earle’s Hot Cloth Cleanser. I don’t want to find a funky new angle on it and it doesn’t need me to try and ‘sell’ it to you – it’s just simply brilliant. I use it three or four times a week (in comparison to my other thousand-and-one products, that probably get used once or twice a fortnight!) and it never fails to leave my skin bright, smooth and thoroughly cleansed. It works when I have oily skin, dry skin and sensitive skin, and it removes the very heaviest of makeup without being at all harsh.

This sounds too good to be true, doesn’t it? It gets even better. You can use Cleanse and Polish all over your face. Including your eyes! I smother the cleanser over my lids and lashes every time – and though it smells really strongly of Eucalyptus, it doesn’t sting one little bit! Incredible. You can leave the cleanser on for a little while if you like – I sometimes leave it for five minutes or so, giving it the odd little massage-in every now and again. The natural Eucalyptus, Rosemary and Chamomile in the cream work to cleanse, purify, calm and invigorate, whilst the Cocoa butter moisturises.

Now here’s the really genius part – please forgive me if you’re a ‘hot cloth’ regular and have heard all of this before – you use a muslin cloth soaked in hand-hot water to gently remove the cleanser. So instead of just rinsing, the cloth really works away at the skin, taking off dead skin cells as it removes the cleanser! After you’ve finished ‘polishing’ your skin looks glowing and radiant. Using the ‘hot cloth’ cleansing method beats normal cleansing hands-down – it gets rid of every last speck of dirt and, when you think about it, is really a ‘cleanse and exfoliate’ in one!

There are quite a few ‘cleanse and polish’ type cleansers on the beauty market now, but I still feel as though I get a bit of an extra ‘kick’ out of Liz Earle’s version – perhaps it’s the Eucalyptus and Rosemary that makes it feel so fresh and rejuvenating? Liz Earle’s Cleanse and Polish costs more than the high-street versions, but I don’t consider it to be a high-street product, so that’s only to be expected. It’s still considerably cheaper than products such as Eve Lom’s cleanser, and I prefer the creamy texture of it to some of the heavier, waxy cleansing balms. It doesn’t leave an oily residue on my skin which means I can use it even when my skin is a little bit temperamental!

Cleanse and Polish is available in loads of different sizes, from a 30ml portable tube (£5) right up to a 200ml size (£21.50). Personally, I prefer the pump-action bottle, which is £11.50 for 100ml, and lasts me around three or four months of regular use. For £1.50 extra the starter kit has muslin cloths included, but you can also buy muslin cloths on the internet. Liz Earle deliver very quickly, everything comes hand-wrapped with, if you’re lucky, lovely little samples of other products for you to try! There’s also an amazing Christmas edition that comes in a sleek silver container – this would make a gorgeous gift! 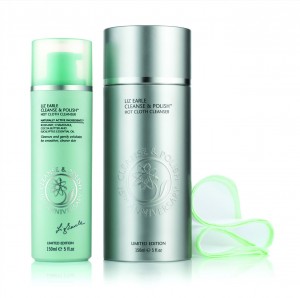