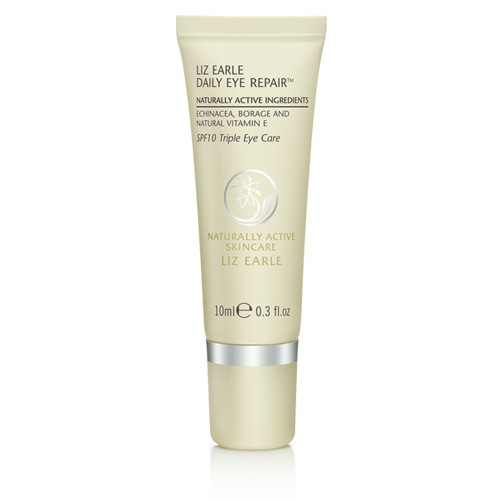 After the launch of Liz Earle’s new haircare range I went on something of a rampage through their catalogue, wanting desperately to test each and every one of their products. I have always been a fan of Cleanse and Polish, but it was the haircare that really did it for me – natural, gentle and not ridiculously expensive. I’m always looking for skincare that is soothing and calming for when my skin has been through the mill (usually after a string of beauty shoots!) and I wondered if Liz Earle’s moisturising products could be as friendly on my face as the shampoo had been on my scalp!

Well. First in the testing game: Daily Eye Repair. I usually have major problems with eye creams if I’ve been shooting; having the sensitive skin around the eyes messed about with all day long is a recipe for disaster. I sometimes get sore red patches that come up near the outer corners of my eyes that are really sensitive and raw, a bit like burns! Whenever that happens, I have to be very careful with the products that I use. However, as a (slightly mad and dangerous!) impromptu test, I applied some Liz Earle Daily Eye Repair to my undereyes after a day in the studio.  There was no sensitivity whatsoever. It didn’t particularly soothe the skin, but then it’s doesn’t claim to! I was just very impressed that it didn’t sting one little bit!

It’s a straightforward eye cream containing Echinacea, Borage and Vitamin E.  It claims to visibly reduce the appearance of fine lines; it contains an SPF10 and light reflective particles to help disguise undereye shadows.  I found that it absorbed quite quickly, left the undereye area feeling very moisturised rather than tight, and did seem to have something of a ‘soft focus’ effect on my shadows  (although I think that only cosmetics can ever truly disguise dark circles). I have a few very fine lines around the eye area and, again, there was something of a ‘soft focus’ effect here, too.

I like that this cream can be used on sensitive skin even though it doesn’t scream and shout about it – it’s just natural and simple! It doesn’t irritate like many of the ‘high performance’ eye creams that I try – probably because there are no harsh chemicals in the formula – and the moisturising effects really do last all day.

So far, so good with the gentle products, Liz Earle!