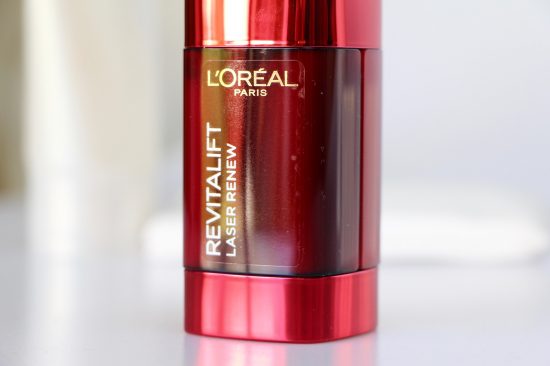 You may have noticed that moisturiser reviews have been a bit thin on the ground, recently; that’s because I’ve been in my “testing laboratory” phase again, which is when I try my very best to stick to just one product. (Rarely do I manage more than a week or so without caving in and slathering on about a billion new skincare launches, but I do try to mainly stick to one thing!)

The latest product to get a good old going over? Brand new day cream from L’Oreal Paris; The Double Care. It’s the latest addition to the Revitalift Laser Renew line-up and the most powerful yet in terms of formulation. Combining a stable form of Vitamin C (a brilliant antioxidant, great at fighting free radicals and helping to both prevent and repair sun damage) with 6% Pro-Xylane (revitalises and firms the skin as well as helping to prevent water loss) it is, in effect, two brilliant face creams in one. 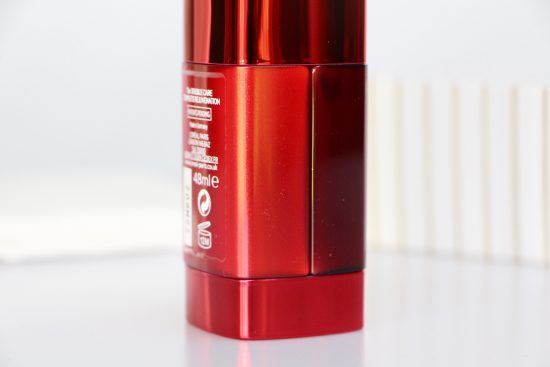 A key feature of the packaging is the dual-chamber pump which keeps the two lots of ingredients separate until they reach your skin. There’s a reason for this, apart from the bottle looking all modern and hi-tech: the active ingredients in the formula can be used in really potent amounts, which wouldn’t be possible if they were all bunged into one pot. It keeps the actives in optimal condition. I’m trying to think of one of my amazing analogies here, but all I can come up with is two boxers being kept apart until the fight begins and the sparks fly! Perhaps not the most savoury example… 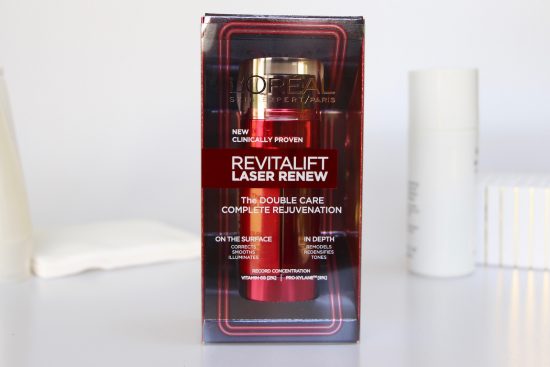 But you catch my drift, I hope. High-performance stuff, offering complete rejuvenation both on the surface of the skin and deeper down. I gave it a three week trial – and actually, I didn’t know that I’d be working on this launch so I tried it well in advance as well as more recently. I had a “prototype” version that was given to me at the L’Oreal labs in Paris a couple of months ago, and after applying it for a few days in a row and liking the texture, I decided to carry on.

Now just to go on a little diversion, here: I’ve really been getting into my Vitamin C, skincare-wise, for the past year or so. I’d tried varying strengths and textures, some so powerful that my eyes have nearly popped out of my head, some more pedestrian, but I have to say that I really like the effects. I try to remember to put on some sort of antioxidant (usually heavy on the Vit C) every morning before my day cream, just as an added bit of protection against the various bits of damage that the outside environment can cause. (Even if I’m not going anywhere, I’m a fan of the “Big C” for helping to achieve that sort of even, radiant skintone that exists in my beauty dreams.)

What I liked about The Double Care was that I didn’t need a separate antioxidant serum and day cream – I just used the one product and then went in with my foundation or tinted moisturiser. A standalone, proper SPF if I was outside in the elements, too, obviously… But considering that I had been using a whole wheelbarrow of stuff before my testing period, it was rather a blessed relief to have simplified things! Of course there’d be nothing stopping me from using an additional serum (and on some of my drier days I did in fact go in with a bit of the Revitalift Hyaluronic Concentrate, just to keep things in the family!) but as The Double Care day cream contains the highest dosage of their anti-ageing Pro-Xylane molecule ever used in their products (double the concentration of the existing Laser Renew Day Cream, in fact), it sort of felt redundant to. 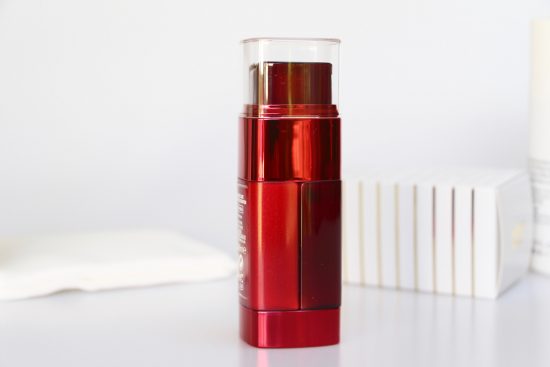 Clever, really, to make a potent day cream, because so many women don’t use a serum or even know what one is. (About 90% of my friends and family, despite me banging on at them seven days a week.) Most seem to rely on their “face cream” or moisturiser to do everything, which is fine so long as it does do everything and isn’t just a heavy-duty lard-like layer that plops itself down and proceeds to do nothing.

Talking of heavy-duty lard-like layers, L’Oreal tested the Revitalift Double Care against an incredibly popular and well-known luxury face cream (it costs around £200, you can probably guess which one I’m on about – you can read details here) in a blind trial. Coincidentally, I tried this cream myself – I could only manage a week I’m afraid, see below – immediately before The Double Care. I couldn’t get on with it at all, it was greasy and buttery and although my face looked plump in the mornings, it was in more of the way that a chicken basted in fat might look plumper than one that had been pulled straight from the fridge. (Ha! I knew I’d get one of my ridiculous comparisons in…)

So the results  – that 71% of women preferred the Double Care to the luxury, £200+ anti-ageing market leader – make absolute sense to me. Though the textures are really quite different (the Double Care cream is far less rich in feel and absorbs quickly and easily by comparison) 70% still said that they actually found Double Care to be a more luxurious experience. (You can read some of the insights into the consumer study here.) It seems almost absurd that this cream costs a tenth of the other one, but such is the land of beauty and its little quirks.

I’ve worked my way through a good few of the Revitalift range now (the SPF here has become one of my most-used, thanks to its bouncy, juicy texture) and nothing has disappointed. I’ve just been reading through all of my press gumph and seen that Revitalift is – by a clear margin – the world’s number one bestselling anti-ageing skincare brand. Quite a feat. The Double Care face cream is set to be the anti-ageing jewel in the Laser Renew crown, I suspect…