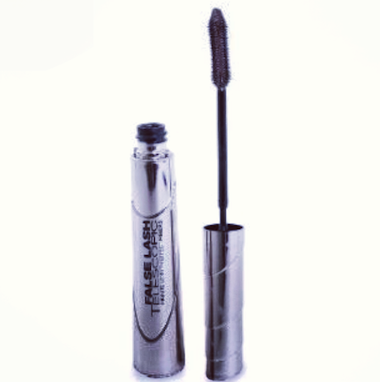 It would be unfair of me not to give this highly affordable little mascara its own post. I have used it so much in recent videos and so I feel a bit like I’m going over old ground, but if I don’t give L’Oreal’s False Lash Telescopic Mascara a dedicated post then it won’t come up when people search for my mascara recommendations. And that would be plain wrong!

I think that this mascara is just marvellous. It makes me cringe, now, to think that Maybelline’s Great Lash used to be my favourite high-street buy! That has nothing on this baby! The False Lash Telescopic “gives good lash” with just one or two quick coats and rather than bulking the lashes out, it keeps them sophisticated and separate. Maybelline’s Great Lash is pretty natural and uninspiring compared to the l’Oreal. I love that the Telescopic doesn’t clump or add weird elongating fibres to the lashes – it just makes them a little bit longer and a tad beefier. It’s marketed as a “False Lash” product but it’s in no way over-the-top. We’re talking the type of false lashes that, say, Anne Hathaway might wear. And not Jordan.

I’ve had a few comments from people regarding the original, non-false-lash version of the Telescopic; it doesn’t seem to be as popular. I haven’t tried that one, but do let me know your thoughts below. If you want to see this mascara in action then take a look at Date Night Makeup, Burberry-Inspired Makeup and my Natural Casting Look. (A quick trawl through my recent videos shows that I used the Telescopic in nearly ALL of them – I must use something else for the next few!)

I think that this is a top, top mascara. I have been using mine for months and it’s still got some life in it; the mascara hasn’t dried out at all and the bendy, rubbery brush has no product clogged around it whatsoever. Top marks.

L’Oreal Telescopic (False Lash) costs £10.99, though it’s in the sale at the moment for £8.41 with free delivery at FeelUnique.com HERE