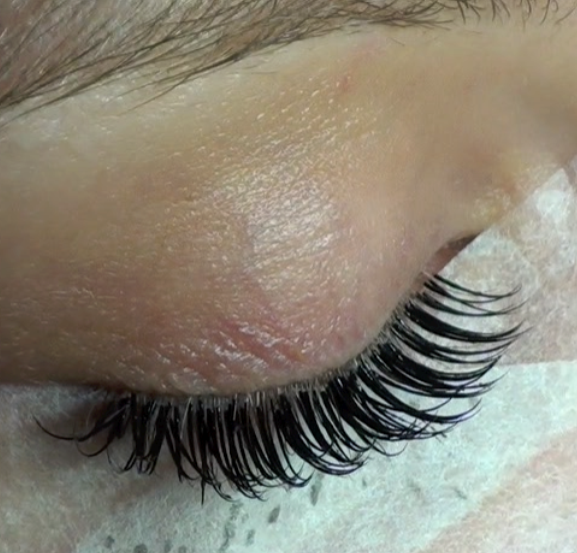 I am so hideously embarrassed about something that I did last week. I feel so stupid that it has taken me a couple of days to decide whether or not I actually want to write about it; but I do feel that it is my responsibility to tell you about any ‘occurrences’ regarding beauty products or services even if they have happened after review and recommendation.

Now before I go any further, I just want to say that my beauty catastrophe (for that is definitely what it was!) has nothing whatsoever to do with Flutter lashes who so very kindly and professionally applied my lash extensions just over a week ago. No; this cautionary tale tells of an event that was entirely my own stupid doing, which is why I feel quite ashamed of myself.

After the wonderful Nicky at Flutter visited my house to painstakingly apply a gorgeously glamorous set of lash extensions, I was over the moon. My eyes looked brighter, more awake – my face looked fresher, prettier, and I was excited about being mascara-free. I filmed a series of videos in quick succession because I adored the way my eyes looked on screen; I sauntered into castings batting my lashes about like a madwoman, received compliments excitedly, telling all who would listen about the beauty phenomenon that is ‘Flutter Lashes’.

Why, then – why oh why? – did I start plucking them out? I would love for someone to tell me, because I have absolutely no idea! It started with a couple in each corner – I twiddled with them and after a while, the lashes inevitably pinged out. And with the extension comes the natural lash. Can you see where this is going yet?

Fast-forward to Wednesday of last week and a mildly stressful day. After a few strained phonecalls I realised that I had once again been fiddling with my lashes, and had pulled out perhaps another ten or fifteen in total. And again, that night, another fifteen whilst I was watching TV. It was like a compulsion, I just couldn’t stop doing it!

A sensible person with a touch of foresight would at this point have phoned the lovely Flutter ladies and told them all about the lash-plucking…not me! On Friday morning I took a look in the mirror and realised that I had picked SO many lashes (some extensions had come off whilst leaving a natural lash behind, thank God!) that I had less than ten left on my left eye (out of 80 or 90) and around twenty on my right. I think that ‘sparse’ is the correct word to use here. Sat in front of my magnifying mirror and armed with some DHC Deep Cleansing Oil, I decided  to go ahead and remove the lash extensions to stop myself from picking them out – and my natural lashes with them!

My lids by this point, as you can imagine, were a little raw from all the plucking and pulling that I had been doing, and the oil stung. Especially when it went in my eyes. (Are you building up a picture of my desperate stupidity yet?) A couple more lash extensions did eventually slide off, but after an hour I had what looked like some kind of eye disease. My eyes were bright red, the lids were swollen, and I was – get this – late for a casting. Only at this point did I pick up the phone and call Flutter!

Oh God bless Flutter and their calm, understanding ladies. They must have felt incredibly frustrated at this crazy woman (me) who had phoned up begging to be helped but who then explained that she wouldn’t be at home because she had a hair appointment. (Looking back, I don’t think that I was actually in a good frame of mind. I looked terrible, my eyes hurt, I could barely see and I was having some kind of mental panic attack.) Because my hair appointment would last into the evening, getting Flutter to remove the few remaining lashes was impossible and so I had to find somewhere in the West End that would remove them! If I had left it even one more night, I have no doubt whatsoever that my lids would have ben totally bald.

Before I continue with my little tale of woe, let me just clear something up. I’m not a Drama Queen, a hypochondriac or a neurotic, neither am I any more vain than the average woman (surprising considering my occupation). If this had been a hair-dye disaster or a fake-tan disaster or a nail disaster (do people have those?) then I would have happily sat at home and waited it out. Calmly booked a salon appointment for the following day – week, even – and had a bit of a giggle. But pulling eyelashes? It’s a bit different. Especially when you realise that you’re down to your last few! Especially when you’re a model. People normally expect models to have eyelashes. And it was weird – I simply couldn’t stop plucking at the lashes.

In the end, I made my way to JinnyLash on James Street, W1 for an ultra-emergency session. This was, by the way, orchestrated by the wonderful Aly Hazlewood of  The Truth About Beauty who helped to arrange the appointment as I was walking to James Street! They removed the remaining extensions within a few minutes, leaving me with a rather frail, short and sad set of natural lashes. More about those later.

I know that this seems like a rather long-winded tale of self-pity, and I’m sorry about that, but if you have ever had a beauty disaster you’ll know exactly the type of panic that it induces. Burnt your face with bleach? Plucked out all of your eyebrows? Squeezed a spot and made a scar? Ripped off a load of dry skin on your lips only to give yourself a serious cut? Hmm. I bet there are loads of beauty disasters out there. Nothing makes you feel quite so stupid as ruining your own face or body. Especially if your livelihood is your face and your body!

I’d just like to say a massive sorry to Flutter for ruining what was a stunning set of lashes. I still firmly believe that lash extensions are an amazing way of altering your looks non-surgically. I have no idea why I developed a compulsion to pluck my lashes this time around – my summer set lasted for eight weeks without me touching a single one! The moral of this tale? DON’T FAFF WITH YOUR FACE! That goes for eyebrows too – once they’re tidy, STOP! Put the tweezers down! If you do have lash extensions and find yourself compelled to pick, get them removed. Oil may loosen the glue bond, but you’ll lose a hell of a lot of natural lashes trying to remove extensions yourself. See upcoming post for more details on massacred lashes…