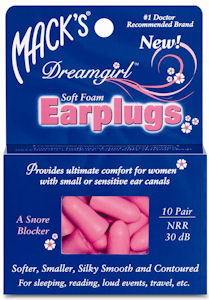 Say hello to the most noise-intolerant person on the planet: ME. I actually have a proper, verging-on-ridiculous problem with noise that other people make. Obviously I’m OK with my own noise – if I’m watching TV or stomping about, then that’s fine, but everyone else must observe my Noise Rules. Ha! These include: no loud television, no loud radio, no loud sneezing, no loud phone-chatting and no loud SNORING! (Yes, I know that I must be an absolute delight to live with…)

It goes without saying that the man of the house fails to live by the Noise Rules. It sometimes even seems as though he deliberately breaks them to make a point – but surely he wouldn’t do that? 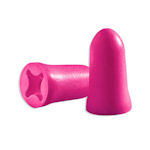 You can probably guess that I spend much of my time (waking and sleeping) wearing earplugs. It’s the only way I stay sane – if you have a hangup about sound that’s as serious as mine, you need to take steps to seal yourself off from the world! (Note: when I’m not working or trying to think, or sleep, or relax in the bath, I LOVE to make lots of noise. Usually wine is involved.) I’ve tried out dozens of different earplug types and brands but none so far have been as comfy as the Mack’s Dreamgirl. It has been specially designed for ‘ladies’ who apparently have smaller ear canals. I have to say, the standard-fit earplugs do sometimes give me incredible ear-ache, which kind of defies the point of wearing them in the first place! The Dreamgirl is perfect. Bonus feature: designed to BLOCK SNORING! Can these earplugs get any better? Mmmm….they’re pink… They’re cheap… The packet looks like something from a 1950’s American drugstore…

I realise that 99% of you are now bored to tears – sorry about that. It’s just I have been meaning to write about earplugs for some time (lucky you!) and I decided that today was the day. Perhaps some of you have the same problem – with noise, with small ‘ear canals’, with snoring. Consider your problems solved!

I got mine from the Snorestore for £7.99 (10 pairs) but if you Google there are loads of deals!