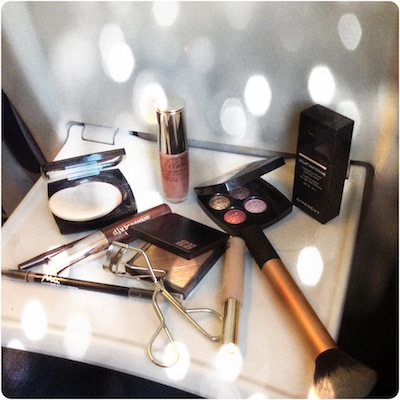 Much to the annoyance of the man next to me, I did a full face of makeup on my way from London Euston to Birmingham International on the Virgin Pendolino service. I didn’t feel bad, because this man had the most infuriating way of breathing I have ever encountered. It was as though he’d swallowed a whistle. I was en route to the Clothes Show Live where I was filming the latest batch of Street Style Steal for DailyMix TV and I’d had rather an early start, so forgive me if that sounds uncharitable!

Anyway, here are the details on the main products used. There are a couple of things that I didn’t put into the photo for aesthetic purposes – these include a lash comb (had clumpy bits on it) and some eyeshadow brushes (they kept rolling off the edge of the table).

1) Real Techniques Buffing Brush: amazing! Along with the Givenchy Airy-Something foundation (matte but not drying, light but good coverage) it creates an absolutely flawless base. Love, love, love. Nice to use a brush, too, when you’re on the train and don’t particularly want to get foundation all over your hands and then your clothes and then your coat. (Happens.) I use shade four in the Givenchy Foundation, you can get that here – and the brush is part of the Core Collection set, at Boots here

2) Estée Lauder Double Wear Stay-in-Place Concealer – still a firm favourite, after all these years! Doesn’t budge, but don’t leave it too long after dotting it on before you pat/blend in, it starts to set quite quickly. I use shade “light” during winter. Find it here

3) Shu Uemura Eyelash Curlers. The best, I think, though my Chanel ones are almost identical in terms of design. I have tried dozens of curlers and they never live up to the power of the Shu. These have £2 off at the moment in the House of Fraser sale! Drop in the ocean, I know, but every little helps. Find them here

4) Givenchy Poudre Bonne Mine – brilliant for pale complexions to add just a hint of healthy bronze. I used shade 02 which has some kind of unpronounceable name, find it at House of Fraser here

5) Mii Eyebrow Pencil – I think I went a bit OTT with this. I had to discreetly erase some “extra” eyebrow when I got to the Clothes Show – having performed the risky task of “doing my eyebrows” by the dim light of the train window, I had inadvertently given myself something bordering on a monobrow. But this is a great little eyebrow pencil – nice soft texture but with good lasting power. Mine is in the lighter shade, which I think is called “Reveal”: Mii Cosmetics

6) DJV Lash Beautenizer Mascara – literally one of the best mascaras ever invented. I use it a lot for filming because it doesn’t budge, not one bit – it’s one of those tube-forming mascaras that only come off when you hold a warm, damp cloth to your lashes to loosen the bond. No makeup remover required! Find it at Cult Beauty – it’s £18 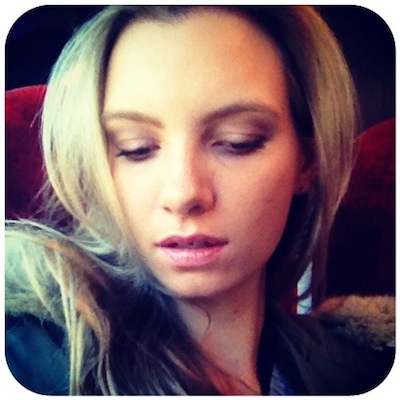 7) Lancome Face Powder. Is good – does the job – but there’s not a hell of a lot you can say about a face powder! I think, also, that I have a shade too dark for my wintery, pallid face. Humph. Nice sheer texture though, and never looks cakey!

8) Chanel’s Holiday Palette steps away from the usual Christmas offerings of frosted silvers and gives us warm little pinks and a goldy beige. I love it – dark circles must be well-concealed, though, if you’re going for pinks around the eye. Otherwise you just look tired and/or like you’ve spent the night crying over a pint of gin. You’ll have to check your nearest counter for this – it seems to be sold out online. It’s the Harmonie Du Soir palette.

9) Last but not least, the By Terry Or de Rose Blush Prestige. Possibly the world’s most expensive cream blusher, tipping in at a hefty sixty quid, I feel a small rush of excitement combined with twinge of guilt every time I use it. It’s a sample that I’ve actually had in my possession for a while now, so I can’t believe it has taken me this long to get around to writing about it. You know how I feel about the By Terry foundations – absolutely worth every single penny. They make my skin flawless but in a juicy, young, vibrant way rather than a perfected, boring, ageing way. (Know what I mean?) This little bottle of blush (which is more of a rose-tinted highlighter, really, it’s so gleamy!) feels like the concentrated essence of what they must pop into the foundations to give them that unparalleled glow. It’s like some kind of magical little potion! It needs to be used incredibly sparingly, but buffed into the cheeks and temples just after you’ve applied foundation….well. It’s pretty, pretty nice. Have a go next time you pass Space NK and let me know what you think. Don’t just try on the back of your hand, though, try some Sheer Expert on your face and then buff in the Blush Prestige – I’d be interested to know your thoughts. Find it at Space NK