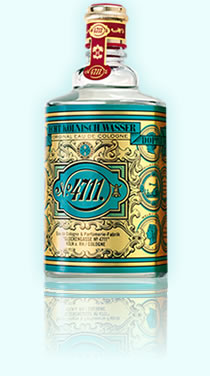 Last week I travelled to Cologne in Germany to learn all about Cologne and..er..make Cologne! I was beside myself with excitement at the prospect of actually making my own fragrance – I had visions of myself wearing a white coat, with my hair under a hair-net, clarting about with teat-pipettes and jars of liquids. Just like A-Level Chemistry! (Thank GOD I did A Level Chemistry, that’s all I can say. It has been invaluable on at least….no occasions.)

The most famous Cologne, I think, has to be 4711. When someone says ‘Cologne’ I think of the 4711 bottle – its appearance is strangely ornate yet slightly kitsch at the same time. It’s like a cross between an Emperor’s prized decanter and a worryingly inexpensive Russian vodka – the gold label, the flounce and formality of the styling, the glass bottle that defies all of the contemporary marketing rules… It’s this individuality, though, that stamps its mark on people’s memories – you remember it on your grandmother’s dressing table, in a chemist’s when you were small, you spot it on a shelf instantly because it looks almost as though it has arrived in some kind of time-machine. How utterly delightful!

Nice then to get a little insight into the history behind the brand, and also discover ‘what’s in the bottle’. Although obviously, nobody would tell me the exact recipe. (Unfortunate seeing as I had already rented out a lock-up and bought three-thousand crates of empty bottles so that I could begin my knock-off 4711 production line!) I had to make do with a run-through of the cologne’s composition, smelling each individual oil that’s included in the magic formula. If you’ve never tried 4711, I’ll try to explain it to you; it’s light and fresh and zingy but also strangely overpowering – it’s first uses, at the end of the 1700s, were to keep nasty smells and illnesses away. It was sipped like medicine or soaked into a cloth and pressed against the face, so I’m guessing that a ‘delicate rose base with hints of summer jasmine’ wouldn’t quite have cut the mustard in 18th Century Cologne!

Ingredients in 4711: Bergamot, Lemon and Orange. Yum, yum and yum. To me, that’s perfection – just leave it right there, 4711! Then, ‘heart notes’ of Lavender and Rosemary. Herby and relaxing, they kind of balance out the zingy, hyperactive citrussy head notes. There’s a Neroli base note – Neroli is taken from the bitter orange plant – which helps deepen the scent very slightly and give it some longevity. Overall, though, this isn’t supposed to be a ‘perfume’ – it’s a light, fizzy kind of scent that needs to be reapplied quite frequently.

At this point, I was thinking WHATEVER! Give me my teat pipette and an empty bottle! Having seen the very clever ways in which the 4711 notes were played off against one another, I was chomping at the bit – convinced that I could make the next super-fragrance…. I can tell you now; it’s harder than it looks. (You must have known I’d say that, surely?) Confronted with dozens of oils it felt as though the choices were endless – and they were! We started off by adding tiny amounts of oil to the bottles and frequently smelling the combinations, but it was a bit overwhelming having so much choice. And it’s funny – if someone told you to mix an orange paint, you’d know to mix red and yellow, and it’s the same with fragrance except that the untrained nose (MINE!) has hardly any concept of these olfactory ‘colours’ or how to imagine the results of combining them. 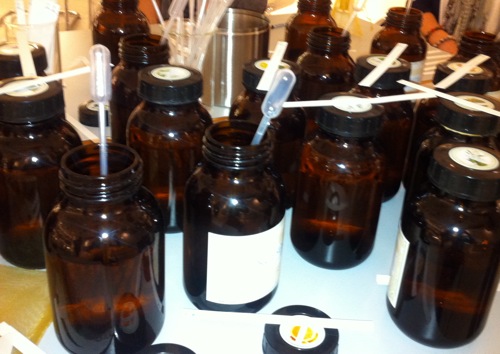 Luckily, head perfumer Alexandra Kalle was on hand to guide – and wrinkle her nose up very subtly when things had gone wrong! At one point I added far too much Vetiver and everything looked a bit ruined, but I balanced it out by adding about a gallon of everything else! I made a few discoveries along the way which were 1) I absolutely adore ‘Green Tea’ perfume oil – it’s amazing, 2) I’m not as much of an orangey-orangey person as I had once thought! I had expected to launch myself into making my cologne by adding all of the orange oils (Neroli, Mandarin, Orange Suss) into a bottle and declaring it finished, but then I discovered ‘Green Tea’ and fell in love straightaway. I would have been happy with just a bottle of Green Tea, I think, but that with added orange and a little Vetiver made for a very wearable cologne. If I do say so for myself.

My recipe (don’t all rush to copy it at once, haha): ‘Orange Suss’ 4ml (I think this literally translates to orange juice, but it wasn’t from a carton!), Green Tea 8ml, Grapefruit 1ml, Vetiver 1ml, Bergamot 2ml. It reminds me of an Elizabeth Arden perfume sample I once got free in a magazine – a whole world away from the carefully thought-out, ‘stands-the-test-of-time’ 4711. It really made me appreciate what a careful balance of notes there are in 4711 – and how skilled you must have to be to create a fragrance that’s completely new, but not so ‘different’ that it will scare people and make them feel uneasy.

I had a long chat with head perfumer Alex about how she creates her fragrances and it seems that there is a really fine line between people’s perceptions of what they think they like the smell of, and what they actually like the smell of. Chanel No5, for example, is not that nice when tested blind, (I can vouch for that!) but it has such powerful branding behind it that somehow the subconscious tells the brain that it should like it. (My little pseudo-psychological theory there – take it or leave it!) Anyway, it’s one of the most iconic, bestselling fragrances in the world (along with Tocca, which is – coincidentally – a fragrance from the 4711 group!) and so Chanel must be doing something right. Back to Cologne – Alex takes around 6-8 weeks to develop a fragrance, and things such as bottle shape, demographic, label colour and even the name of the fragrance all help to for a ‘vision’ in her mind of how the final perfume should smell. What an interesting job to have!

I want to be a perfumer when I grow up!

Alex didn’t start off her adult life as a perfumer, so there’s hope for us all, folks! Anyone out there want to be a perfumer? And whilst we’re finding that out, does anyone have particular memories of 4711 – who wears it now? You can find 4711 at Boots – they have loads of different bottle sizes and toiletry products. Go in store and have a sniff -let me know what you think!