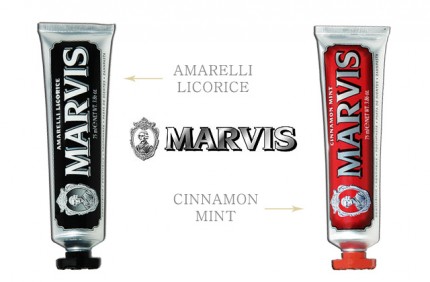 Whoo! This one’s gonna divide you: who’s for Liquorice toothpaste then? No ordinary Liquorice toothpaste; this is Marvis’s Amarelli Licorice Toothpaste, and I, for one, love it. It’s like brushing your teeth with melted down Blackjacks except that it doesn’t stain them black or (importantly, for a toothpaste) rot them.

Before you completely write me off as insane, I’d just like to say that the Liquorice flavour is just as refreshing as a standard minty toothpaste . And it’s not just some random, novelty Liquorice flavour that’s been bunged into a tube, Marvis consulted for ages with Amarelli (producers of Italy’s finest Liquorice since 1731. Apparently.) to get the sweetshop flavour just right.

There’s a Cinnamon Mint flavour too, but I’m not a massive fan of Cinnamon. If you are, then I can imagine that the Cinnamon will be equally pleasant. I think that the tubes also look a lot smarter in the bathroom than the standard Colgates and Aquafreshes of the world. I’m so irrescuably shallow that I think about things such as ‘how my toothpaste tube fits in with my decor.’ The Marvis Liquorice looks pretty posh, and I like that. It has a pretty posh price-tag though, too, though I can wholeheartedly justify it by saying something Dad-like and boring such as “no money’s too much money when you’re looking after your teeth”. Or something.

Marvis Toothpaste is £5.50 from Carter & Bond or Niven & Joshua.