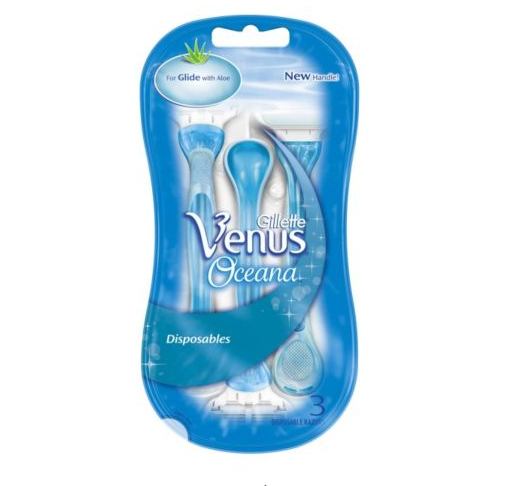 After my little post on hair removal last month (or was it the month before) I set about trying out a few new things. The first was an epilator, but more on that in a separate post because I need to work up the courage to give it a second try! The second thing was going to be a wax, but then I changed my mind (ie, chickened out) and decided to test throwaway razors instead! What a cop out!

I know that I will probably burn in hell for even owning a pack of disposable razors – they’re not particularly environmentally friendly, after all. It’s a lot of plastic, a lot of unnecessary waste. However, I wanted to have a little test of a few to see whether they had advanced at all since 1998, which was the last time I used one. It was a BIC and I sliced open my ankle.

Pleased to say that the Gillette Venus ‘Oceana’ is a sturdy little thing with an excellent rubber handle that almost sticks to your skin! No more slippery, possibly life-threatening razor chases around the shower cubicle! However, the head of the razor is exactly the same as the blades on my normal, refillable razor and so I have to admit that I’m at a slight loss why you would buy the disposable version! Surely easier just to buy the razor heads and swap them over, keeping the same handle?

Answers on a postcard, please people: what is the advantage of a disposable razor over the refillable? Have I missed an important trick? Do let me know!