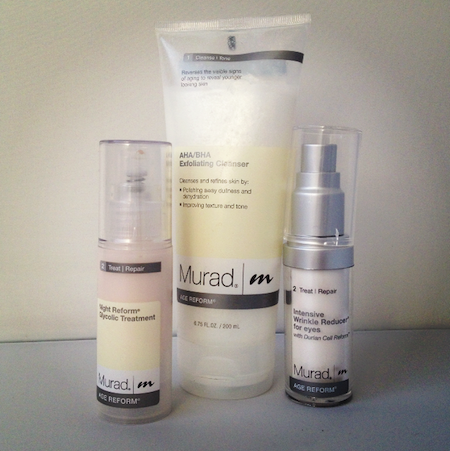 For those looking for an effective cleanser with extra “nitty gritty”, this AHA/BHA cleanser could be just your thing! I mentioned it in the Exclusive Newsletter as one of my favourite new products but didn’t offer a full review as I had only been using it for a few weeks. Now it’s been a few months and I can safely pop it into my recommended cleansers category.

The Murad Exfoliating Cleanser is just that; a cleanser that effectively exfoliates whilst lifting out dirt and makeup. Personally, because of the gritty texture of this, I’d remove the majority of my makeup first, especially eye makeup. Some of you at this point might be thinking so what’s the point in this if I have to cleanse first?! and I know where you’re coming from – I too like to use a cleanser that I can work into my mascara and massage in. This one, though, serves a slightly different purpose. It’s more of a polisher, a zinger-upper of the skin. It’s a cleanser with added oomph. It contains salicylic, glycolic and lactic acids to help remove cell buildup (though the effectiveness in that regard will depend on how long the cleanser’s left on the skin) but I think that it’s probably the jojoba beads that are going to be doing the majority of the work.

This cleanser leaves my skin feeling very smoothed and pepped-up without being drying. It’s in no way moisturising – it doesn’t feel nourishing or pampering – but it doesn’t feel stripping either. I find that it’s a nice cleanser for really making sure that all of that SPF is cleansed off at the end of the day! I wouldn’t use it before another AHA treatment (Liquid Gold, for example) and do not use this with a Clarisonic, but it’s brilliant for those in-between nights when you want something a little scrubbier than usual. I’m not the world’s strongest advocate of facial scrubs, but this one has rounded jojoba beads and doesn’t feel at all scratchy. So it makes the cut! Great for combination oily skin that gets the odd breakout – I wouldn’t use it, personally, on already-erupted blemishes, but the mild exfoliating action will keep the skin clear and fresh.

Murad’s AHA BHA Cleanser is £31 (but I think it’s on sale at the moment!) with free delivery from BeautyBay.com