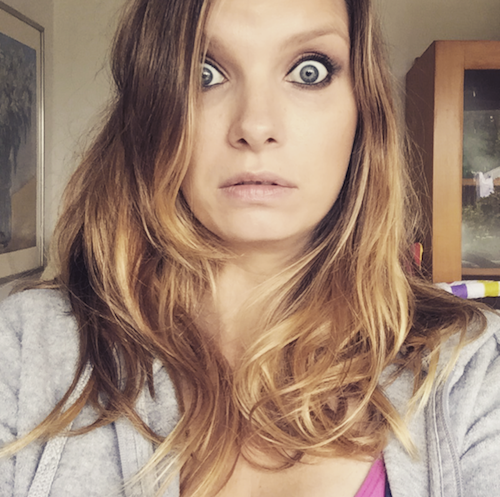 Call me naive, but I wasn’t really properly prepared for any of the things that happen to your body once you’ve given birth. I had a bit of a mental block about anything post-pregnancy, including what it would actually be like to – y’know – have a baby to look after, and so I didn’t read very much about post-partum body stuff at all. A quick email around to a few friends who had also spent a long time trying to conceive revealed that they suffered from the same phenomenon – they had been so focused on getting pregnant, and holding on to the pregnancy, that they hadn’t even considered life after the birth.

Anyway, that’s probably a whole other story: for now, let’s talk body shockers! I meant to write this at the height of my shocked-ness, when I was hobbling about a holiday let with a crying baby, not being able to stand up straight and leaking milk from my boobs whilst accidentally spotting blood onto the carpet. But obviously I was otherwise engaged.

I use the word “shock” because it sounds better than “surprised”, but I have to say that none of the body changes were at all horrendous – more inconvenient, really, or just unexpected. I didn’t even get much pain from my C-section scar, though I’ve had some minor issues with it recently; again, it was more of an inconvenience. So you can uncover your eyes and ears if you were getting worried – there’s no screaming or crying here. I’ll save that for another post, hohoho!

1. At the top spot for post-partum surprises: the post-partum tum-tum. Yes, that beautiful taut egg-pod of a full-term pregnancy tummy became a sagging, wobbling mass of spongey flesh overnight. Not that I really had an “overnight” after the birth, because I slept for about an hour, but you get the drift. After my catheter had been removed (don’t even – I’m so squeamish) and I was prompted to use the bathroom, I got out of bed (rolled onto the floor) to find I was carrying what felt like a sack of potatoes in my belly. A huge sack. Don’t get me wrong; I knew that pregnant bellies didn’t flatten out quickly, but I wasn’t expecting to still look eight months pregnant! It took weeks and weeks to go down to anything resembling a non-weird stomach and now, seven weeks on, I still have a sizeable gut. It’s saggy and sad and my belly button looks as though someone has traumatised it with a stretching implement. It reminds me of those odd flesh-tunnel ear holes when the hoops have been removed. Sexy.

2. Next in line: blood. For some insane reason I assumed that vaginal bleeding after birth was linked to vaginal births and so, when I was preparing for the C-section in my head I thought “yesss! No bleeding!” Well. I was wrong on that front! Six thousand mattress-like maternity pads later and it’s only really just stopped. The past four weeks have been very light, but the first three were a total pain in the neck. You’re supposed to let air get to your C-section scar, but can’t, really, because without massive pants on and a huge absorbent pad, you’d bleed everywhere. I can’t imagine how inconvenient it must be if you’re trying to keep perineal stitches clean and dry!

3. Forceful milk eruptions. OK, I knew that breasts produced milk, I’d have been an absolute tool not to have known that. What I wasn’t aware of was that nipples could actually squirt milk – proper streams of it – and that they could do so completely unprompted. The first time it happened, I was sitting up in bed and it just streamed out through the air and hit the opposite wall! It’s no wonder, then, that I had been waking up to soaked sheets and duvets if my breast pads had slipped out of place… It’s phenomenal how much liquid breasts can produce!

4. Nausea. I thought that I had left nausea behind with the first-and-a-half trimester of pregnancy but no, a couple of days after the birth there it was, back with a vengeance. I was worried I had transmitted some awful hospital bug at first, but soon realised that I was experiencing it only in the first minute or so of a breastfeed, and when I Googled it (good old Doctor Google!) I found out that it was a hormonal thing, the release of oxytocin, linked to milk let-down. Well I never. I still get it a bit, seven weeks on.

5. Loss of memory. Nothing too severe – I don’t think I repeat myself, or anything like that. But I used to have a brilliant memory and now I rely on lists for everything. And post-it notes. I feel as though I’m in that film where the bloke I can’t remember the name of has had something happen to him that I can’t recall and he has to leave a paper trail everywhere to remind himself of who he is and so on. Memento, is it? Whatever: I find it hard to remember to brush my teeth or drink water let alone remember facts and figures.

Do feel free to add any of your own unexpected post-partum body changes in the comments below! We could start a little database…