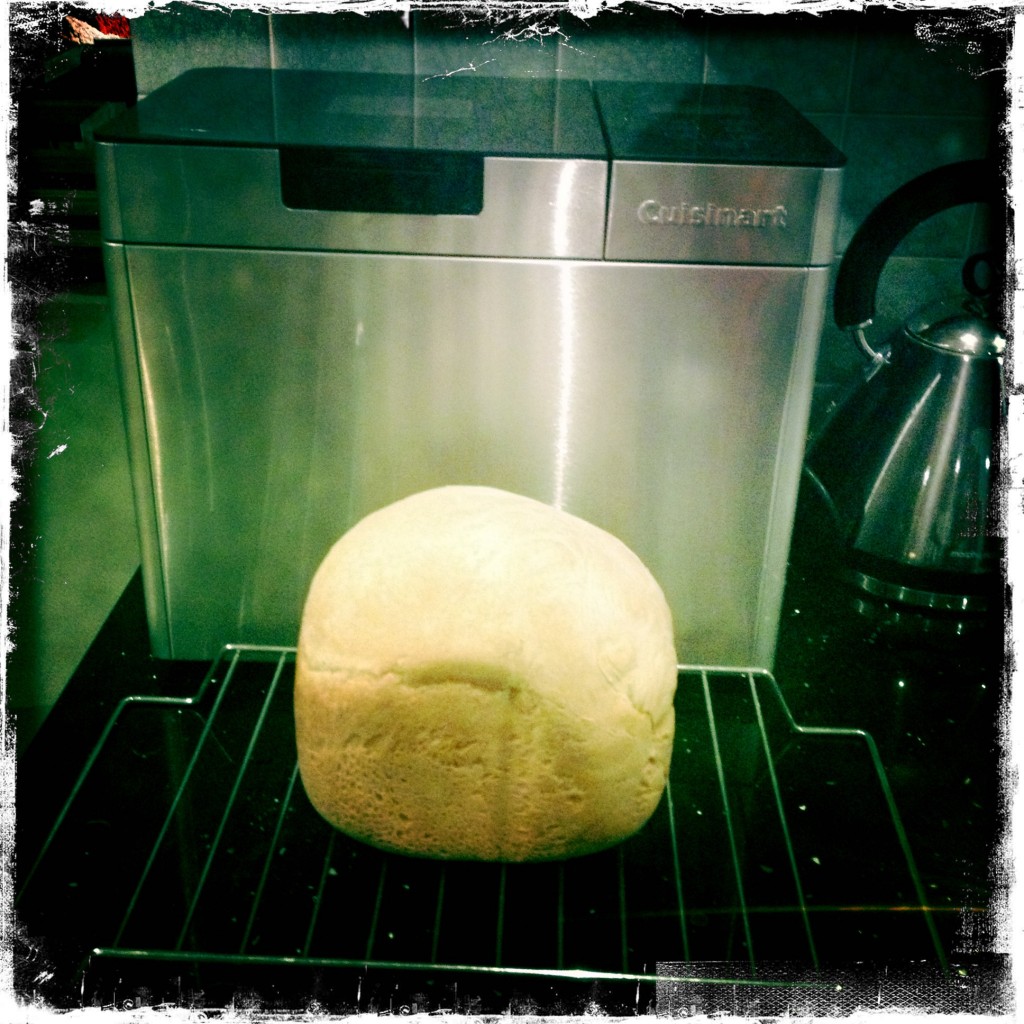 I have finally taken the plunge and bought a bread maker. Or bread machine, people seem to call them both things – I prefer ‘maker’ because it sounds more friendly. And there he is, my friendly little bread maker, sat on the kitchen worktop next to the kettle. You might be wondering how I went about choosing my bread maker from the hundreds available out there, and I’ll tell you: I was extremely shallow and almost entirely based my choice on appearances.

Yes I know that appearances aren’t everything, but you must understand that Mr AMR is ridiculously picky about the appliances that are left on show in the kitchen. They all have to match and they all have to blend into the background. Which means that almost everything we own is stainless steel with a black trim – the kettle, the toaster, the knife-block, the oil-drizzler, and now the bread maker. The slow cooker and the George Foreman are also matching, but they live in the bottom cupboards because they don’t get used on a daily basis. George only gets let out about once a fortnight when we have a full English!

So back to the bread maker and its “looks” – I’m semi-joking when I said I chose on appearances alone. I actually did quite a lot of research on this. The best machines seemed to be the Panasonics, but they all looked like great big plastic ice buckets or something and I don’t do plastic in the kitchen. They did have a stainless version, but it was still that weird bulky shape, so I had to find a machine that worked just as well but that looked good. Step forward Monsieur Cuisinart and his square, sleek lines. He takes up less room than the chunky round machines and can fit flush against the wall.

The photo shows our first loaf of bread – preparation time, 48 seconds (Mr AMR and I did the measuring and pouring together) and then machine time, three hours. How magnificent! I didn’t think magic like this existed! We poured in the water, added salt and a tablespoon of oil, then covered the water with flour and put the yeast in on top. That was it! Closed the lid, and three hours later a lovely loaf popped out. The kitchen smelt like a bakery and we had fresh bread, yet there was no mess whatsoever. This bread maker is literally my new love.

You might have been mumbling away to yourself throughout all of this, thinking what the hell’s she doing eating bread? Doesn’t she know that bread is the work of the devil? What’s a model doing eating bread? Well yes I do know that we shouldn’t all be stuffing our faces with bread every single minute of the day, especially people who may/may not be called upon at short notice to bare all in some kind of torturously embarrassing lingerie ensemble, but that brings me neatly through to the reason for buying the machine in the first place: I wanted the bread that I eat to be fresh, healthy and pure. No preservatives, no additives, no sweeteners and enhancers, no weird processes with the ingredients that sap every nutrient out of the final product, no flavourings, no excess added sugar, no strange chemicals. Have you ever looked at the ingredients list on the back of a pre-packed loaf of white sliced? I rest my case.

Good bread is not bad for you when eaten in moderation. You’re better off eating a couple of slices of homemade bread with good, pure butter and some nice marmalade than eating one of those Special K bars or a bowl of crunchy nut cornflakes! A slice of bread topped with a poached egg? Even better. The problem comes when we pile bread with crap, or our diet is generally poor and also happens to be carb-laden. The biggest problem with our diets today is excessive sugar consumption and the people going on about how much fat there is in an avocado are totally barking up the wrong tree. I must write more about my feelings on all of this, but for now, I’ll say one thing: eat fresh food, eat unprocessed food, and you’ll be going a long, long way towards having a healthy diet.

When I speak to other models about their diets and eating habits, most are quite adamant about eating well-sourced, unprocessed foods. I don’t want to get into a long-winded discussion about thin people and not-thin people, but when I think about the people I know who have lean, fit bodies, they are definitely not the same people who regularly eat ready meals and snack on party packs of M&Ms in front of the telly. Of course models (and athletes, and dancers, insert your own examples!) eat junk – just very, very occasionally. Fresh bread with no additives isn’t junk – it’s food. The sooner we start to focus on eating good quality unprocessed foods rather than silly fad diets, the better!

I bought my Cuisinart from Lakeland Plastics (are they still called that!) but they have them slightly cheaper on Amazon:

You can get much cheaper machines if you don’t want or need stainless steel – I have no idea how good they are, but I have seen Panasonic ones for around £80 that get very good reviews. The bread, by the way, tasted amazing. Very light and fluffy with a good crisp crust!