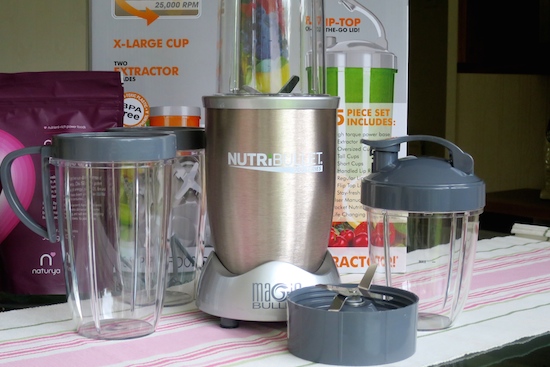 And so, when I had only just got my head around the idea of juicing, something else was thrown into the mix: blending. As in smoothies. (But not the mango and papaya sweet-as-you-like things you can buy with your croissants in the morning; we’re talking very green and very healthy smoothies, here. Spinach and spring greens and avocados and blended-up broccoli. Perhaps with a bit of apple or grape or banana, just to stop you from wanting to kill yourself, but still. Quite green.) Last week something called the NutriBullet Pro 900 landed on my doorstep saying that it would “rival juicing”. “Don’t Juice It!” it said, “juicing removes all of the fiber!” “Don’t blend it!” it said, “blending leaves big chunks!” What I wanted to do, according to the NutriBullet Pro 900, was to “Extract It!” so that the ingredients in my vegetables were “fully broken down and ready to nourish”.

Now I know that quite a few people are sceptical about the whole “drinking your veg” concept. I was. I’m not into following particular health “crazes” or fads and I assumed that juicing was one of them. Not so, apparently – it’s been around for decades. But regardless, when it came to consuming veg, I did wonder: why not just eat it? Well I do think that it makes it easier to meet your recommended veg quota if you’re squashing a whole allotment patch of them into your breakfast drink as well as munching them throughout the day; I don’t know many people who have the time to make sure that they are getting their leafy greens in at lunch and eating a whole spread of rainbow coloured legumes for their supper. There’s the argument that drinking instead of chewing will make your gut lazy, but that’s only really if you’re replacing solid meals with your juices – unless you’re on one of those juice diets (which I tried and gave up on day three… OK day two) you’ll probably be just having a juice or smoothie for breakfast or as well as a light breakfast. One of the arguments for juicing apart from the obvious (benefits of taking in loads of vitamins and antioxidants) is that it gives your digestive system a rest – no bulk to digest, so your body can concentrate on healing and recovering and watching the World Cup on the sofa.

(Read about my exploits with the juicer and  the “juicing” diet)

But I had my own worry about the whole juicing thing which was this: what about all of that pulp left in the machine? Surely I should be eating that? Isn’t that where the goodness is? In the skin of the apple and the fibres of the kale and so on? And what about the sugars in the fruits and the veg? Wouldn’t they be released into your bloodstream too fast? My other worry about juicing was far less profound: I hated having to wash up the components of the machine that had to be dismantled after every session. Even though the Philips Viva juicer is supposed to be one of the best you can get in terms of practicality, you still have to scrape the mush (lots of it) into the bin and pull apart the top half of the machine and wash it all. 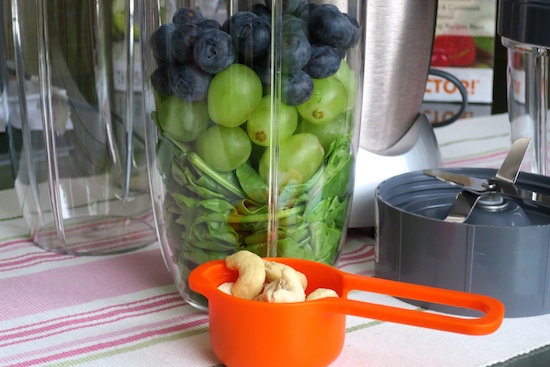 Well. The NutriBullet came along and after I had raised a cynical eyebrow at all of the shouty claims that were plastered over the outside of the box, I opened it up and plonked it on the kitchen table and realised, quite quickly, that this might just be the answer to my juicing quandaries. The NutriBullet is basically a very, very powerful blender (though they call it an “extractor”, more on that later*) that has been specifically designed for the purpose of making smooth, nutritious drinks. It has loads of claims about the fact that it doesn’t make smoothies, it makes supercharged superfood nutriblasts, blah blah blah; but when you cut through this kind of “shopping channel” sales speak, what you’re getting is an incredibly convenient and effective way of making your smoothies. It’s so powerful that you can add your cashew nuts and walnuts and ice cubes and pumpkin seeds and broccoli stems and apple skins and you wouldn’t even know they were there. Everything just gets obliterated, in around five or ten seconds, into this completely smooth drink. Fibre and all. 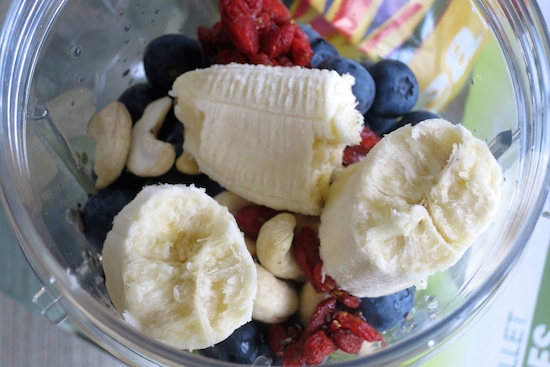 The machine is just about light enough to pick up with one hand and slim enough that it doesn’t take up any room at all on the kitchen worktop or in the cupboard, or wherever it is you want to put it. It takes up about a third or a quarter of the space of a traditional juicer. The NutriBullet comes with a whole load of different cups; two large, one extra-large and a little one that is perfect for a single smoothie portion. You just fill the cup with whatever it is you want to “extract” (blend!) and then screw the blade section on and press the whole thing down onto the base of the machine. There are loads of suggestions regarding what to actually put into your NutriBullet but as a guide, you fill half of it with green leafy veg and then add other veg or fruit to reach up to the “max” line. You then add a quarter of a cup of nutty, superfoody-type boost things such as Chia seeds, Goji berries, cashews, walnuts, sesame seeds, almonds and so on, and add water. I also add a bit of banana or avocado, just to get some thickness into the mix! 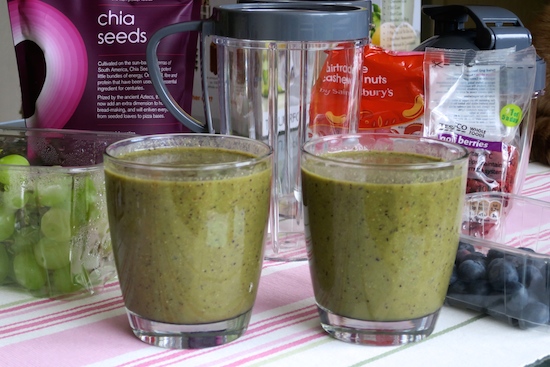 Now, doesn’t that look nice? Ha! It tastes a lot better than it looks. The whole “green juice” or “green smoothie” concept is a bit hard to get your head around, and I am the biggest sceptic when it comes to things like this, but I have to say that since I have been having my juices (and now smoothies) my skin has never looked better and my digestive system has never been quite so efficient. I’ve had a quirky stomach for most of my adult life and I now get far less bloating and other bits and bobs that we won’t go into. Especially when there’s a picture of green sludge juice on the page! I have to say, too that the NutriBullet is exceptional: quick, easy and there’s no washing up to speak of. Just the blade and the cup – and you can drink the smoothie straight from the blender cup. It’s the same washing up as you’d get from making a cup of tea! I love that there’s a lot of leafy green veg in every drink – they really don’t give any other option in their recipes, so the green leafy idea becomes drilled into your brain. I also love the addition of the “boost” ingredients such as the chia seeds and so on; I never eat the amount of nuts and seeds that you’re supposed to and I like the idea that I’m getting my essential fatty acids and so on, all in one hit.

Cons? If you don’t like “bits” in your drinks then you might have a problem with the texture of the smoothies. They are so smooth, the smoothest I have ever tried, but it’s not like drinking water or a smooth juice. Also, there are certain things that you can’t blend – apple pips and cores, same for pears and cherries and most things with a stone. (Releases , apparently – who knew?! CYANIDE.) Pineapples and citrus would have to have the skin removed… With a juicer you just plonk all these things down the spout and the machine takes care of the rest. So there’s a definite use for juicers, I’m not by any means saying that they are out of the picture! But the great thing about the NutriBullet is that you don’t have to have a separate blender to add your banana or avocado or ice, it can all go into the one pot. No mess, no hassle. (If you are on the hunt for a juicer, by the way, I would absolutely recommend the Viva that I have – read here.) 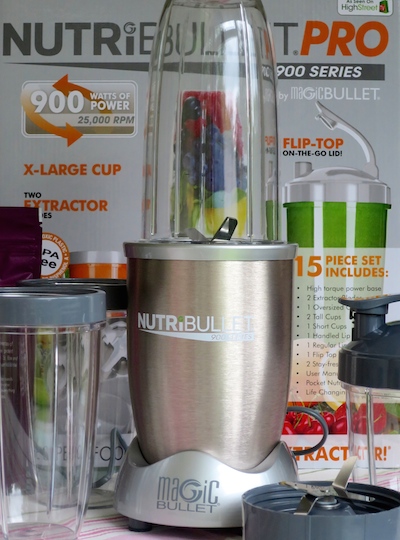 *I’ll go back to the whole extraction/blending issue before I finish; the NutriBullet marketing is adamant that the machine isn’t a blender. It’s NUTRITION EXTRACTOR. And this is fine, except that I can’t seem to find any clear information on what makes it different to a blender. Just a load of marketing spiel. What I will say is that this blender blends better than any other blender I have ever used – and I’ve used a lot. It’s like the Good Housekeeping Institute in my kitchen. I test many gadgets. This one seems to have been built with just the right speed and power and proportions so that nothing gets stuck around the sides, nothing gets missed out of the blades – there are no lumps and bumps that escape. And it does it all in just a few seconds. You can blend for up to a minute or so at a time, but I can’t even imagine what would take that long. Logs? Bricks? Diamonds?

It kicks my usual blender to the curb, when it comes to – er – blending. So I can see why NutriBullet are keen to promote this as something different to a blender – if you’re trying to get the absolute most out of the smoothie ingredients, in terms of breaking them down into the smallest possible parts, then this particular gadget is your guy. I had a quick look at the best rated blenders on the Which? guide and they all came in at around 300-400 watts – the NutriBullet Pro 900 is 900 watts. At £149.95 it’s around £20 dearer than the Which? best buy, but it’s nearly three times more powerful. It’s also loads lighter, slimmer, easier to store, easier to clean and comes with all of the whatnots and cups and lids – also two blade sections so that you can use one whilst the other is dirty, if you’re slow on the washing up front! 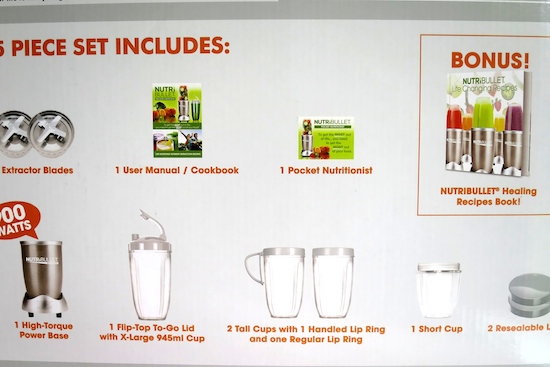 In summary: I wanted to dismiss this NutriBullet as one of those gimmicks that you see on the shopping channels, but it turned out to be one of the best things that I’ve tested out in the past few years. Quick and easy to use, and the smoothie “formula” that you’re given – with the leafy greens base and the extra boost of nuts and seeds to up the nutritional value – is excellent. I still have room in my life for the juicer – I love my ginger and apple shots and it’s brilliant for things like beetroot and carrot and dropping in whole apples – but the NutriBullet makes life a lot easier in terms of preparation and cleaning up. I’ve had a smoothie every morning for the past six days and there’s been less mess than when I just have a couple of slices of toast!