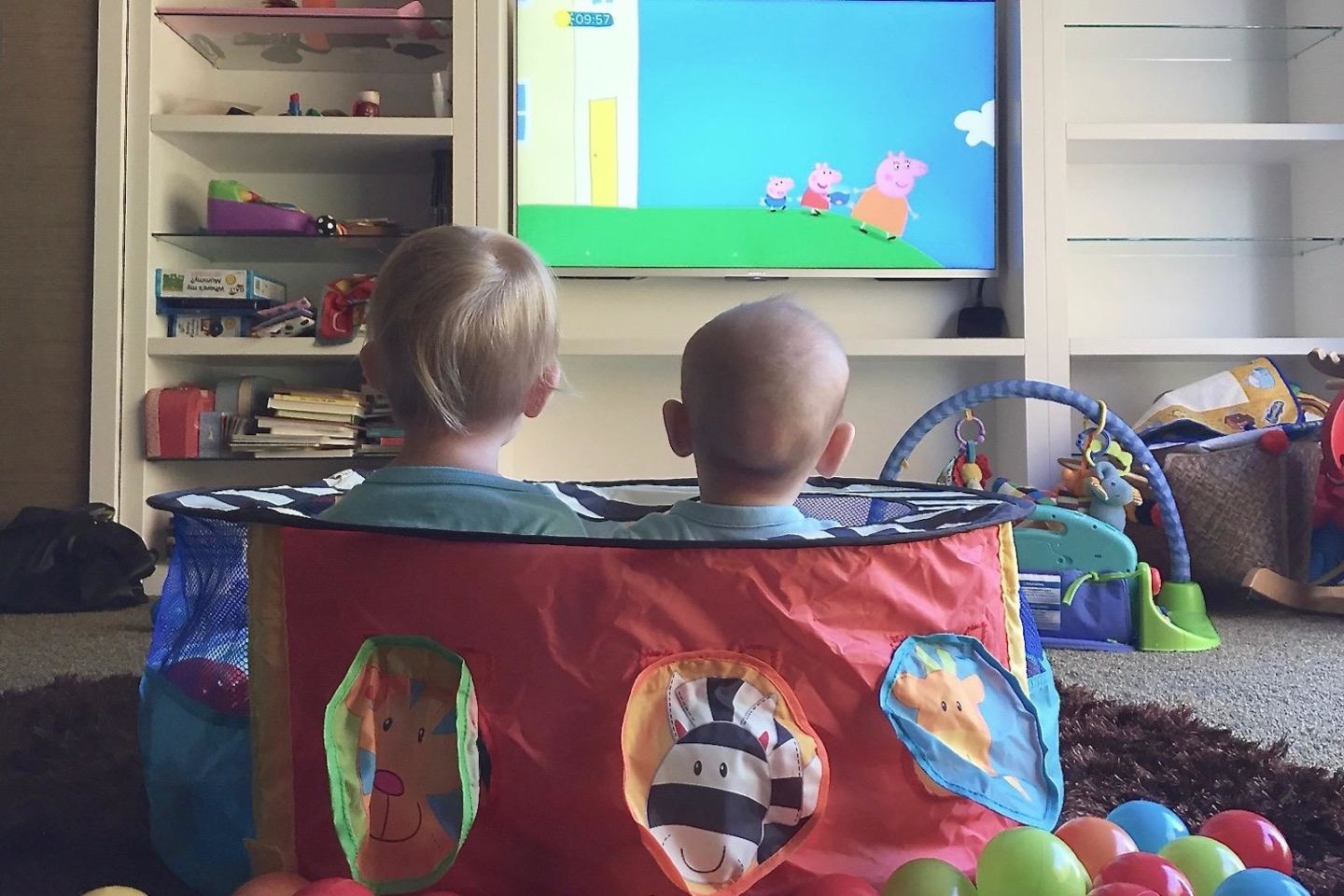 If you’re reading this post thinking that I’m about to reveal five one-off occurrences that made me feel really guilty – sort of like a confessional – then think again. This isn’t a “come clean” session that will absolve me of my past behaviour and allow me to continue Mumming with a clear conscience; these are things that I feel guilty about on an almost constant basis. Repeat offences. Serial guilts.

Although the fact that I keep on doing them must mean that I don’t feel all that guilty…it’s just a perpetual, underlying niggle – things that I know I should (and could) change, but simply don’t have the energy and/or willpower. Here goes – please add your own biggest Mum (or Dad) guilts in the comments section below!

I always thought that I’d be the sort of parent who would find interesting things for my child to do, every single minute of the day. Bored after lunch? Let’s make collages from fallen leaves! Need something to stay quiet throughout the mid-morning? Let’s sit with a giant farmyard jigsaw puzzle made from recycled hemp! In fact, let’s recycle hemp!

In truth, I use TV as the ultimate parenting crutch. I hate, hate even talking about this, but in the interests of transparency (and at the risk of getting a zillion annoying comments) I feel as though I have to be honest. There’s TV in the morning, because it’s always so bloody early and we’re never properly awake, and those extra few minutes in bed, even if Dora the Explorer is wittering on like an irritating parrot in the background, are completely necessary. Then there’s TV at breakfast (on the iPad), a spot of TV before nap-time (one Peppa, so not too drastic) and at mealtimes and then before bed. None of these sessions are like the epic Netflix sessions we adults do, but they still make me feel bad. I’m going to try and cut out the mealtime ones, if only because I can’t actually handle sitting there with kids’ TV on when I’m eating. Then it’ll just be a few “downtime” sessions.

People who don’t allow any television: HOW DO YOU SURVIVE WITHOUT LOSING YOUR MIND? I mean, a) how do you get stuff done and b), don’t you ever just want a sit down with a cup of tea and five minutes of diminished responsibility, whilst your child is in the capable hands of Great Uncle iPad Screen? How do you keep the energy levels up? How do you keep on thinking of ways to amuse for the whole entire day? It’s a bloody long day! Your secrets, please. 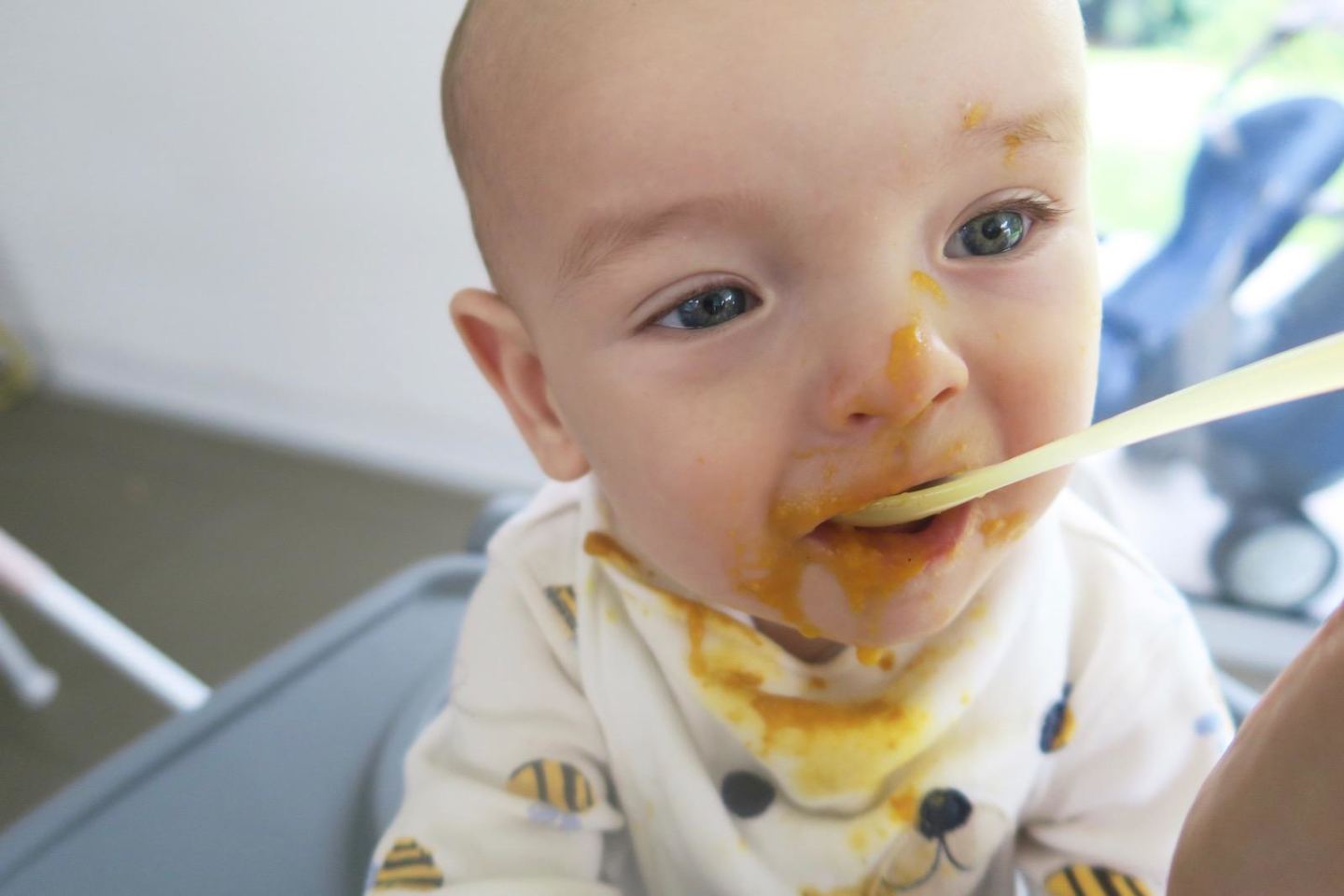 My second source of ongoing guilt is what I like to call the Astronaut Diet. Baby food exclusively delivered via the medium of Pouch. Ella’s Kitchen, Piccolo, Babease, whatever you go for, it’s just the most unbelievably convenient invention since sliced bread. Sliced bread, incidentally, seems to be what I frequently “serve” alongside Le Pouch. To be clear, I’m talking about Ted here, who is 9 months old, not Angelica! She eats proper food. Not that pouch isn’t proper food – this week Ted has tried (and rejected) Lamb Stew, Cottage Pie and Vegetable Risotto as well as various fruit and vegetable purées – but I always thought that I’d be there at the hob, slaving away making delicious recipes and then blending them with a stick blender. HA! That’s happened all of once – it was when Angelica was a baby and she refused it for the whole week. The bits I had frozen in stupid bloody effing ice cube trays periodically came out to be defrosted and immediately (and violently) refused. Ella’s Kitchen Spaghetti Bolognese? Went down a treat.

So really, should pouches be a Mum Guilt? I mean, the ingredients seem good, the products are tasty, there’s no salt or added sugar (at least not in the ones I’ve tried) and it probably means that the baby is getting far more variety than I would cook up myself. Are pouches bad? The guilt – for me – comes from the fact that I’m not personally titting around with a blender and a variety of carefully chopped, slow-cooked vegetables. Every time I spoon goop from a pouch and into the baby’s mouth, a small part of me feels disappointed that I haven’t somehow fulfilled my completely unrealistic domestic goddess role, but then I think about all of the things I’ve done instead of the cooking and everything is OK again.

The fact that a pouch habit is ridiculously expensive should not be overlooked, but I can’t say it’s a factor in my Mum Guilt – I rarely drink wine anymore, and I used to spend a hell of a lot more on that!

I have the sort of job that never stops, and so I have a constant stream of emails and notifications that come though at pretty much all hours of the day. I have all email and notification sounds off and don’t even get little red flags or whatever they are, but I still have to check intermittently throughout the day. And do you know what, I also have a cheeky check on ASOS, a quick scroll through Instagram and a cursory glance over the latest properties to arrive on the Rightmove app. (Though that’s stopped now as we have a house!)

Now and then I do have a dramatic little breakdown and bang on about how I don’t want the kids to see me check my iPhone ever, and I put it away in a separate room, but it doesn’t last for long. In reality, there are quite a few moments throughout the day when a speedy email check is completely fine, especially if the telly is on (HA!) but still. I try not to do it. In the ideal world, I’d only check it on formal work days, but as I don’t have any of those at the moment until we get another part-time nanny, I have to make do with dirty little stealth-glances. It’s like having an affair, but with an object. Oh, the guilt, the guilt!

I’ve been absolutely rubbish at taking Angelica to classes of any kind, and Ted has been to a grand total of zero. To be fair, Ted wouldn’t have a clue what was going on, but Angelica loved Tumble Tots and Hartbeeps. We did go to Tumble Tots every week, I suppose, until we moved, but I always thought (again, the fantasy Mum Goddess!) that I’d have a full timetable of fun activities. Swimming on Mondays, archery on Tuesdays, horseriding on Wednesdays and abseiling on Thursdays, etc etc. On Fridays we would freestyle and go to soft play followed by reading the papers together in a coffee shop.

But it was always the biggest faff getting ready for Tumble Tots – we were nearly always late – and quite often, as we made our way around the wooden apparatus and squishy wipe-clean plastic-covered obstacles (imagine the germs on them – the germs!) I would wonder why on earth we didn’t just set up something in the garden. Because we didn’t interact with anyone anyway! Hardly anyone made eye contact, most people looked as though they wanted to lie down on the mats and stare at the ceiling… I once went to a baby play group on a mammoth scale – it was in a huge sports hall with dozens of kids. A woman sat down next to me, sighed and said “I used to have a personality, once.” 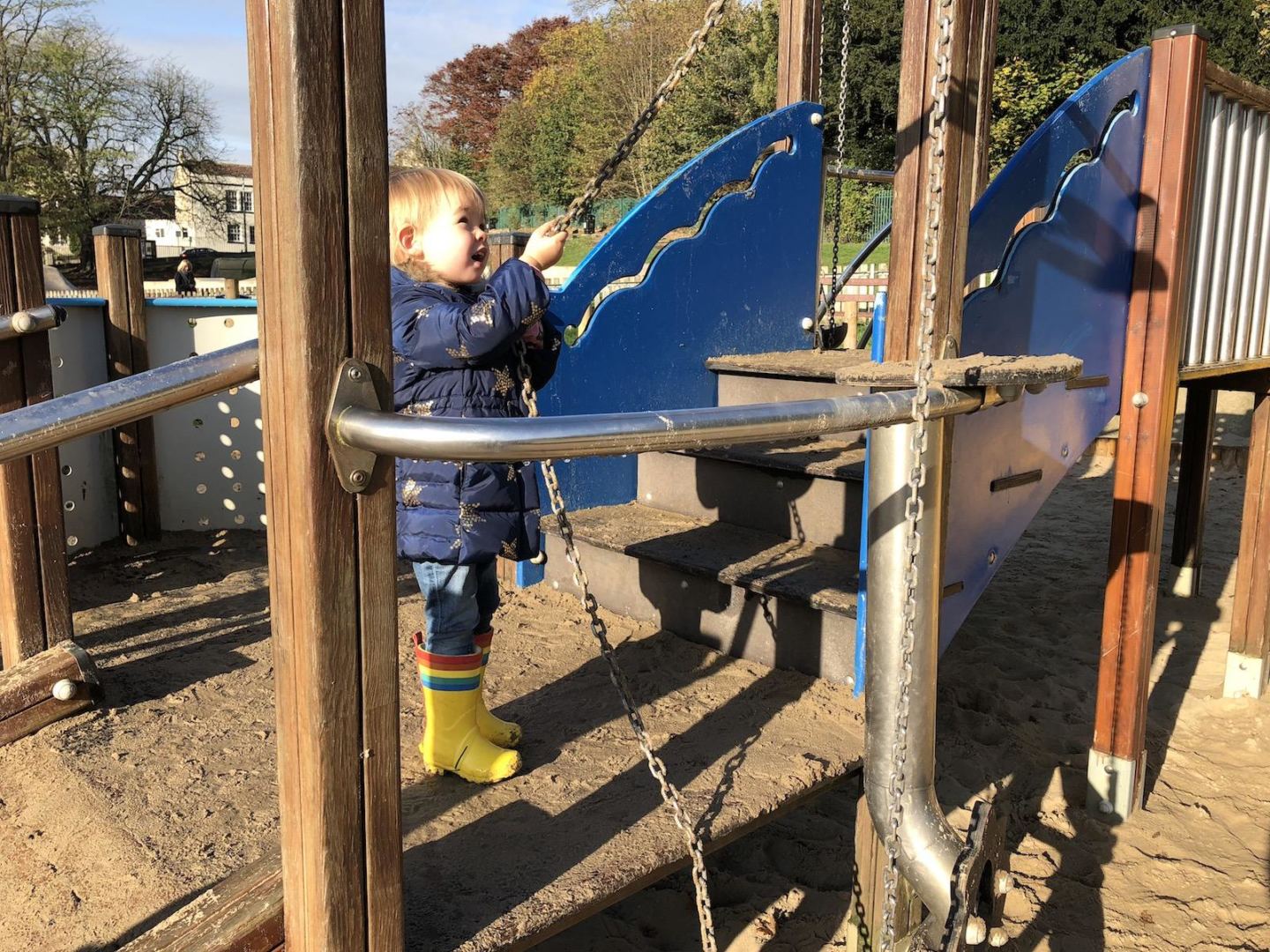 Hatred of the park

Right, I’m going to go there: does anyone else hate going to the park? It fills me with abject horror! Maybe things will change, but at the moment Angelica just doesn’t use the apparatus in any kind of way I find interesting or fun. Rather than hang like a monkey, she touches the bolts on the poles and says “doorbell!”, rather than slide down the slide, she makes patterns in the sand with her shoes. Now it is all very cute, I’m not saying that, but we could do that stuff somewhere else. Somewhere that didn’t require me to stand about like a complete berk, with rain drizzling down the back of my neck and half a gingerbread man clasped in my hands. Doing nothing. Just staring. It must be a bit like what it feels like to be Mariah Carey’s minder or something; you just have to watch out for danger and make sure that your charge doesn’t self-implode.

In my imagination, trips to the park see us cavorting on the swings with the sunshine beating down on us; we take a break to laugh at how Mummy nearly fell over on the pirate ship gangplank, then we hippity-hop up the tyre embankment pretending to be chased by monsters. In reality, I stand there, standing, wearing my parka as Angelica disappears into little cubby holes that are too small for me to climb into and then I try to follow her and get mud on my jeans.

I’m sure things will change, but as it stands (and I stand, standing, watching, guarding) I find it really dull. And that makes me feel so guilty. Because she bloody loves it and gets so excited! Maybe soft play would be more interesting. Though I’ve never taken her to soft play (husband’s domain, don’t know how I swung that one, must have been having another baby or something) and so that could just be one more thing on the list…

OK, people, hit me with your guilty things! Go, go, go! If you have nothing to add, then make sure you’ve read my 10 Month baby update here. I feel even more guilty now that I’ve confessed to my guilty things – Angelica, if you’re reading this in the future, I just hate the park, not taking you to the park. Ahem.