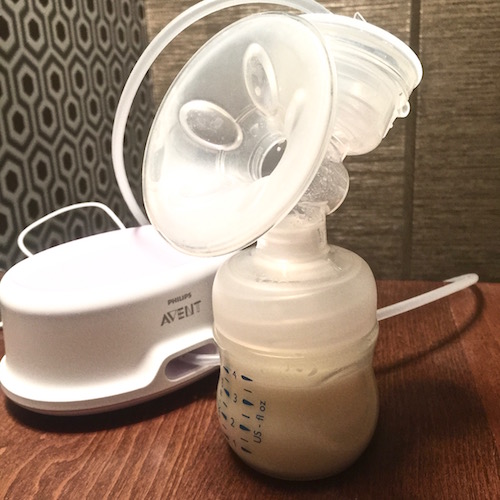 Ooh. New breast pump discovery. Granted, this news isn’t going to turn everyone on, it’s pretty niche, but I’m quite excited because this particular breast pump was a bit of a surprise. I’m not sure why, but I had it in my head that the Philips Avent Comfort Single Electric Breast Pump had really bad online reviews, and so I had shelved it in the utility room and not really felt inclined to give it a try. As it happens, the online reviews for this pump are universally excellent, so God only knows why I thought otherwise; I must have been in the throes of early-post-partum madness.

So yes, a bit of a surprise, it was, (hi Yoda) when I turned on this little beast of a boob-pumper to find that it started my milk flow almost instantly and filled the 120ml bottle that was attached in about twenty minutes flat. That’s in comparison to the Medela, generally considered to be the Gold Standard by most Mums I’ve spoken to or conversed with here on the internet, which takes a good few minutes to stimulate milk flow and then around twenty to thirty minutes to get 50ml of milk.

Now I have no doubt that the three times I’ve used the Avent and obtained vast amounts of milk could simply be coincidence – over-full boob, right time of day, etc – but there does seem to be something that it does that the Medela doesn’t. Maybe it’s the cushioned funnel part (funnel? milking cup?) which is all soft and warm and feels nicer than the rigid, cushionless Medela funnel; perhaps it’s the way that they’ve designed the pump so that you don’t have to lean forward, awkwardly… Maybe it’s the type of suction, long sucks rather than shorter sucks, that floats my milk-expressing boat. I don’t know yet – I just know that it works. Really, really well. 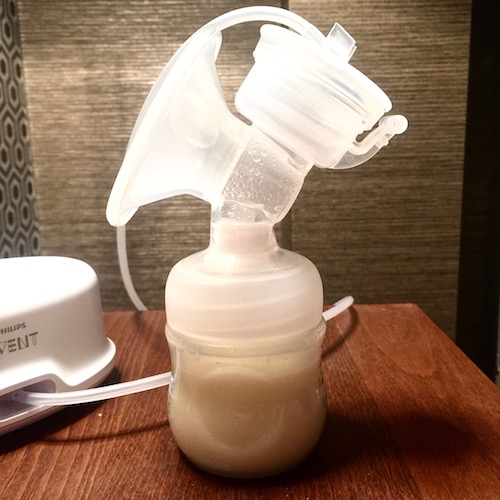 Let’s talk about the milking position. With the Medela and its uncushioned cup/funnel, you have to kind of press the plastic into your breast tissue to form a vacuum and, if you move your back or shift position, the vacuum is invariably broken meaning that you have to reattach all over again. You also have to keep your hand clamped around the funnel part, I find, to keep a good attachment. And lean forward slightly so that the milk goes down into the bottle rather than sliding back onto the breast. The Avent has been designed in such a way that the cup/funnel part forms a vacuum very easily (I think it’s the nice cushion parts!) and even if you wiggle about to plug your iPhone into the charger for the thirtieth time in a day or unwrap a Mint Choc Magnum it stays pretty well attached. Obviously you need to hold it on – it’s not magical! – but there’s not that constant awareness that you need to be careful about your position. You don’t get rigor mortis setting in by the end of your twenty-odd minutes of pumping time. You can sit bolt upright, too (great for the back) rather than half-slumping in order to keep the pump on..

I have to say that the Avent isn’t as neat or attractive as the Medela and it’s slightly noisier (in that it sounds more like some kind of medieval tyre pump rather than the gentle hum of the Medela) but the results don’t lie. 120ml from one breast is epic. For me, at least. I don’t even get that much out of two, usually! Anyhow, I shall continue my experiments and do some kind of league table for you with pros and cons. Price-wise, the Avent is £84.89 on Amazon (here) whereas the Medela is £99.99 (here), so not a vast amount in it – both include a feeding teat so that you have a complete “system”, though I’m finding the MAM bottles to be the best so far. (See here. I use the number 3 teats now for Angelica as she’s 6 months+.) 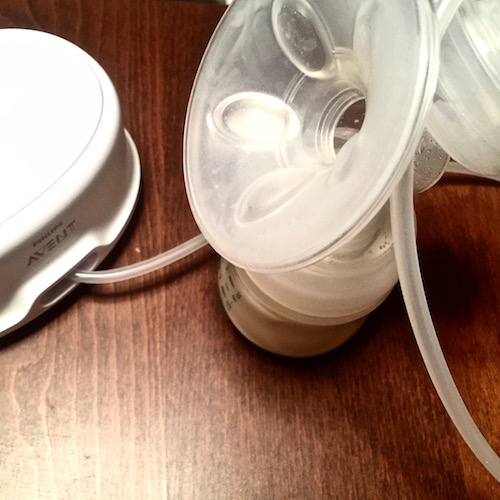 In summary, I love the Medela and I know that it’s a proper favourite – the design certainly looks more refined than the Avent. But in truth, I think that Medela could take a few pointers from the Avent design – the cushioning, the tilt of the funnel, the different suctions options… I’m lucky enough that I’ve had a few different pumps to play about with, but I suppose that many of the people leaving online reviews will only have tested the one, so if that works for them of course they will leave a great review. So it depends on which singular pump they’ve picked up! Which is why I think that my league table could be quite good. I can be the Pump Master. Hohoho. Leave me some suggestions below – I also quite like the MAM Manual pump, though it doesn’t half give me arm ache. Good for stealth pumping in the middle of the night, but let’s not go into that.