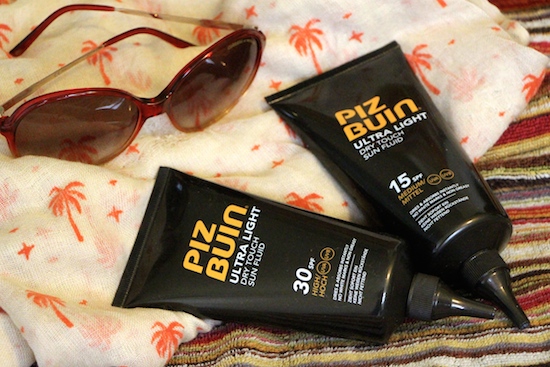 Is it weird that I would wear Piz Buin’s suncare as a perfume? I’ll elaborate: I have actually considered wearing their sprays and lotions ON DAYS WHERE I AM FULLY CLOTHED just to benefit from the exotic fragrance that they are (some might say quite overpoweringly) scented with. Few smells make me quite so instantly happy as the Piz Buin smell; I’ve no doubt that it’s partly down to the fact that I associate the smell with holidays, but it’s also got that really jazzy kind of tropical scent that makes you want to do ridiculous things like drink from a whole pineapple and limbo dance with sixty-eight-year-old cruise-ship passengers. (Me? Never! I’m talking about what other people do, obviously.) I’m half hoping that Piz Buin might follow in the footsteps of NUXE (who have created a fragrance based on their summery, heady body oil, Huile Prodigieuse) and come up with some kind of body spritz or mist based on their signature scent. Though I’m not sure what they’d call it – certainly not Eau de Piz or Piz Water! Ha!

Anyway, silliness aside; Piz Buin have launched a new sun cream formula. It’s a really lightweight cream texture that absorbs extremely quickly and leaves absolutely no residue – the Ultra Light Dry Touch Fluid. I have used Piz Buin for years and years, mainly because their formulas have always had such great textures, but I must say that the Ultra Light is in a different league again. It applies beautifully and sinks in easily – after about ten seconds there’s just nothing left at all to suggest that you’ve applied anything to your skin. Apart from the happiness-inducing scent, of course! This is a great sun cream option for people who want a perfectly invisible finish, who hate the feeling of a heavy SPF on their skin or the greasy shine that some versions can leave. It has both UVA and UVB protection and comes in SPF 15 and 30 – there’s also Ultra Light for the face, but I haven’t tried that. If it’s  anything like the body ones, though, I can imagine that it would leave the most amazingly matte base before makeup or give a shine-free finish for that au naturel kind of look. I’ve really never used a sun cream that leaves such a completely matte finish – apart from perhaps the Neal’s Yard Remedies SPF that has now been discontinued. Though that had more of a powdery feel than a matte one…

The Ultra Light Dry Touch Fluid is currently quite dramatically reduced in price – £8.50 instead of £17 – so if you do need to stock up for the summer months then it’s a good time to do it. You can find the SPF30 here and the SPF15 here at Boots.com or in stores nationwide.