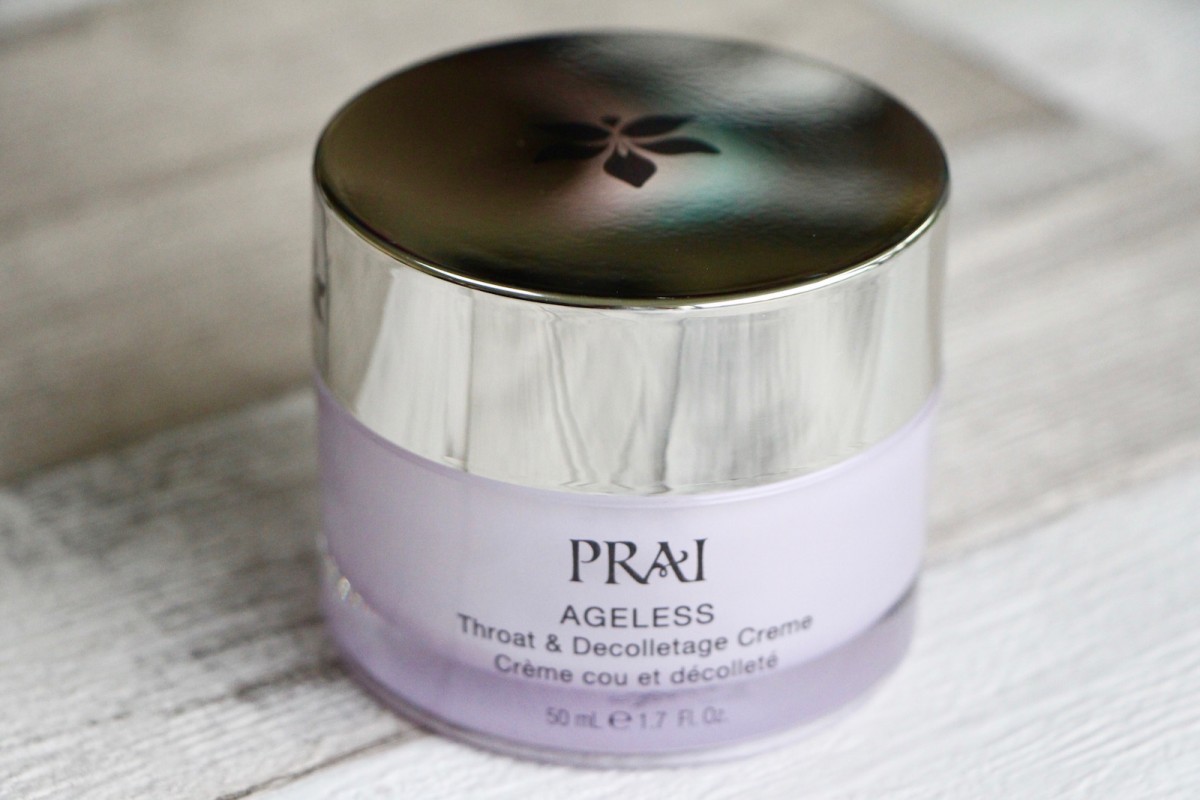 A double-whammy of a review for you today, because not only have I been testing out the Ageless Throat & Décolletage Cream from Prai, my Mum has too. And there’s a bonus ball (if that wasn’t enough) because if by the end of this post you fancy giving the cream a go for yourself, you can enter my marvellous Prai giveaway!

Prai are a global skincare brand and their hero product, the Ageless Throat & Décolletage Cream, regularly sells out – probably due to the rave reviews both online and in the press. I tend to be quite sceptical when people give me amazing facts and figures about a beauty product, and so for this particular review I enlisted the help of my Mum. Firstly because she is (cringe-inducingly) scathing about the things that she tries and her honesty is really helpful when it comes to getting a true verdict, and secondly because (without being rude) she has more neck wrinkles than me.

In actual fact, I have no real neck wrinkles, but I do have a décolletage that errs on the crepey and dry side. Mum, on the other hand, has a perfectly smooth décolletage but has, by her own admission, been slack about including her neck in her beauty routine. (One of Mum’s major points when she reported back to me at the end of her trial was that she wished she had started looking after her neck sooner.) 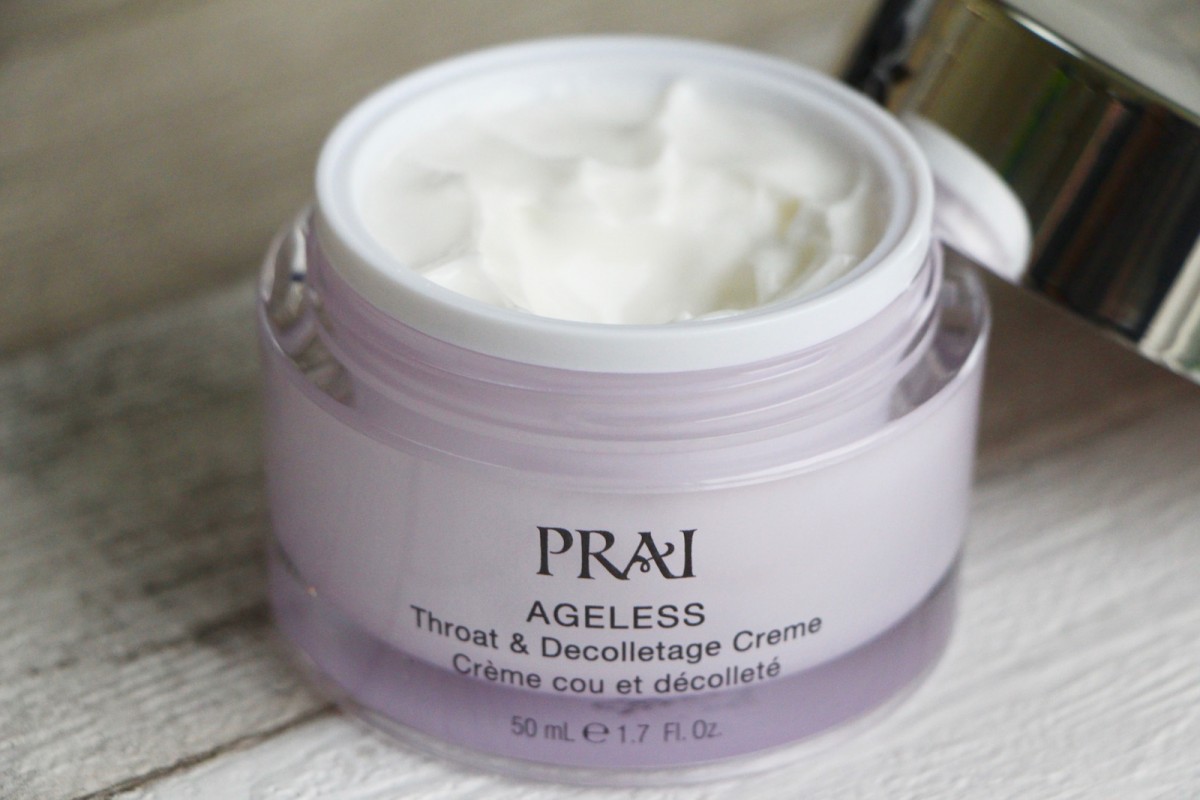 So what is Prai’s Ageless Throat & Décolletage Cream? The product name is pretty self-explanatory – it’s a cream to be used on the neck and chest area – but it’s what’s inside the jar that deserves a little extra attention. A featherweight cream that manages to be really moisturising (and very potent, as you’ll see!) without any greasiness or surface residue. I’ve tried a few neck creams over the past few years and they have tended to be relatively heavy and greasy – I was actually under the impression that richer and heavier would be good on the neck and chest, for some reason. But according to Prai this is all wrong; a cream for that area should be light and easily absorbed to avoid stretching the skin.

I didn’t tell my Mum anything about the cream before she started testing – nothing about price, how it worked, why it worked, what the brand’s consumer test results were (100% of women who trialled it saw visible results in seven days) or how fast she would see results. I’m not going to print my Mum’s full progress diary (yes, she documented the results daily!), just her final summary, but I think you’ll agree that she was at least as impressed as the women in the consumer tests. In fact, as Mum’s review period went on, her texts to me became more and more frantic and excitable – “I CAN SEE CHANGES! EVEN GERARD CAN SEE CHANGES!!!!!!” and “I’M GOING TO START USING LESS BECAUSE I’M SCARED OF RUNNING OUT”. Here’s her summary:

“I have been applying the cream twice daily. It’s really very light, non-greasy, and quickly absorbed and somehow, quite soothing. Since Christmas [Mum had been trying Prai for around two and a half weeks when she wrote her report] I’ve established quite a neck-routine, with daily photos at every step on the computer desk-top, and even my husband was getting involved. I absolutely know and I have the evidence [Ha! Mum should have been a politician] that after seven days my neck was a smoother texture, sort of a bit plumper under the skin and DEFINITELY NO WRINKLES. I’ve viewed it in every mirror and hubby’s shaving mirror and in every sort of light. I do really think though that you have to put the effort in and have your twice daily regime. (In days of yore – the 60s and 70s – every ‘Womans’ Own‘ magazine showed you how to massage your neck and lightly pat under your chin with fingertips.)
The best bit of evidence was when dear husband leant over his dinner and said “Gosh, Chris that neck stuff has really worked, no wrinkles!!” and made me go over to the light, then wondered if he could use it on his neck! Hahaha!! No chance, as on day SIX, I started to panic in case I used it all up!! My next question is can I use it forever now? Or do you have to have a break? (My husband became really quite involved, and started telling me about things he had read in the paper – a scientific study, which stated that massaging skin follicles actually released fat cells from under the skin?)
I am so pleased with the results that I took it the cream to a ‘ladies-who-lunch’ meeting yesterday.” 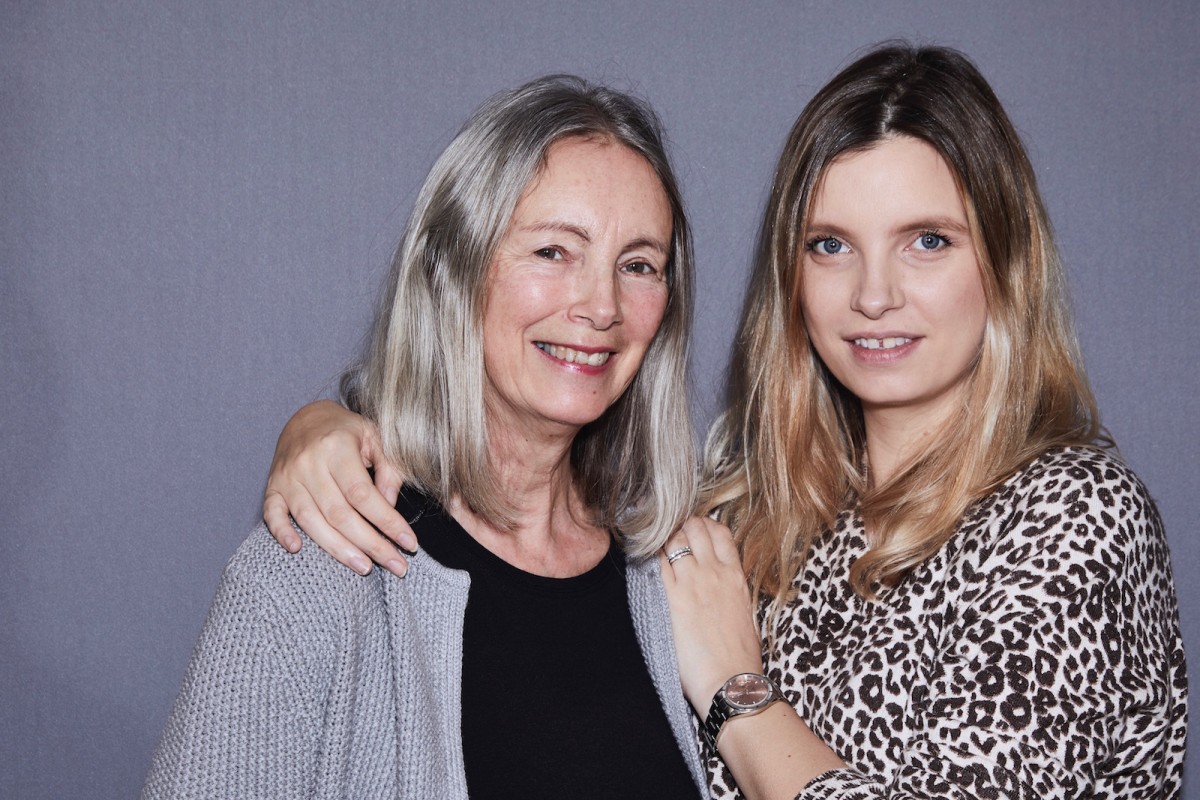 Strangely, I found my Mum’s testing and reporting really satisfying. I find results really satisfying. I think that’s why I love doing my foundation before-and-after pictures so much – it’s really interesting zooming in and looking at how the skin has changed, albeit through the magic of makeup rather than actual physical improvement. But when you see a marked difference in lines, or dark spots, or blemishes – that’s the really satisfying part of beauty testing.

My Mum sent me photos at the start of her trial and then every day until day ten, and, in fact, is still sending me photos daily, even though I’ve emailed her saying YOU CAN STOP NOW MUM. They are quite small, and they have been taken in natural light, which is notoriously unreliable, but Mum did try to take them at the same time every day and they were all taken in front of the computer using the webcam. 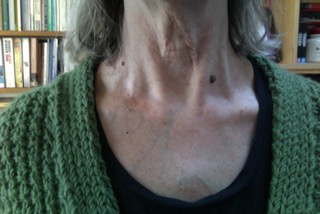 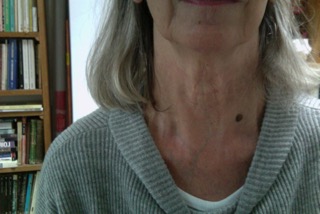 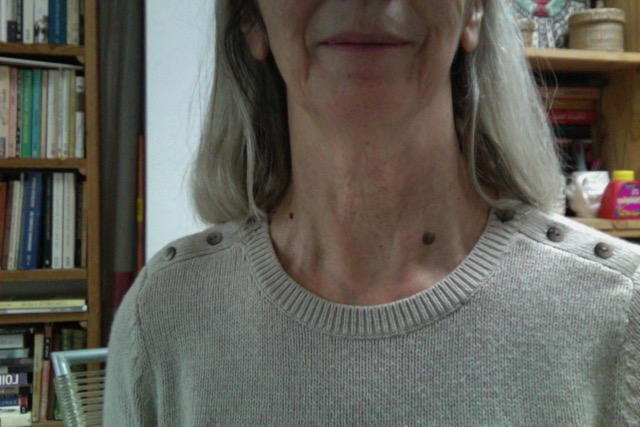 I have to say that I wasn’t quite so diligent with my testing – I did a week, and tried to remember to apply the cream twice a day, but there were a couple of missed sessions. Sessions is probably the wrong word, actually, because this is the quickest and lightest cream to apply. No lengthy massage needed, there’s no “ritual” or “regime” with the Prai cream, because the whole point is that touching, stretching and massaging the skin is kept to a minimum.

The Ageless Throat & Décolletage Cream contains something called Sepilift, which increases firmness and elasticity, Shea and hyaluronic to keep the skin moisturised and supple and vitamins A, E and F to protect the delicate neck and chest area. I definitely felt a marked difference around my décolletage with the skin feeling bouncier and less decrepit, but then I started feeling up my own neck all the time and wondering whether, despite the fact I didn’t really have any lines there to start with, that felt much smoother too. At any rate, I’m definitely keeping up with the application, even if most days I only remember in the evening. My Mum has become sort of obsessed, by the sounds of it, and would apply the stuff on the hour every hour if she wasn’t so scared of developing a weird – and potentially expensive – habit.

Though that is one of the beautiful things about Prai’s cream – high-end results, but a distinctly non-high-end price. You can find it at Boots.com for £19.99. I almost fell off my perch when I found that out! It’s Leaping Bunny certified (not tested on animals) and, in fact, Prai donate a proportion of all sales to animal charities worldwide – approximately $250,000 a year. I’m finding it increasingly difficult to find anything I don’t like about this brand! A cult, sell-out cream with proper results but no ridiculous price-tag? I can absolutely see why there’s already a devout following. I think that the standout success is the way that the formulation manages to combine effective ingredients and a fast-absorbing texture, so the benefits are delivered to the skin without any unnecessary dragging.

What do you think? Do you fancy giving it a whirl? You can pick it up from Boots.com or in-store, but if you’re feeling lucky then enter your details into the comments section below (email address in the form where prompted) and you could win one of 25 pots that I’m giving away. If you’re stuck for something to write in your comment then just copy and paste “YOU CAN STOP TESTING NOW, RUTH’S MUM!’ and maybe she’ll stop sending me her daily wrinkle updates. The giveaway is open until noon (GMT) on the 27th January, 2017. One entry per person please and – only if you fancy – it would be great to hear any feedback you have if you are lucky enough to win a pot!