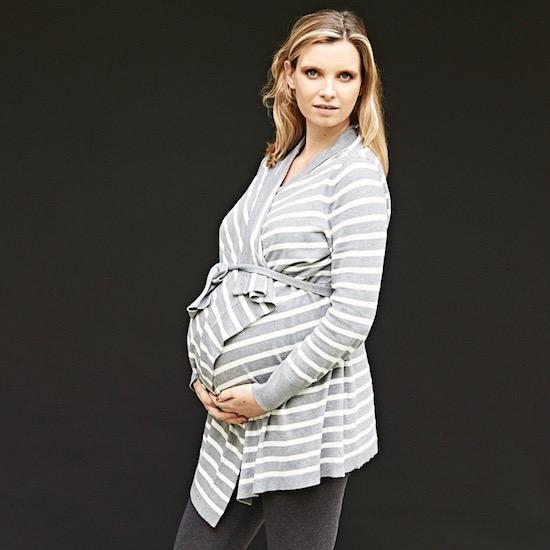 How magnificent! I’ve finally caught up with the pregnancy diaries. I’m writing this live, not typing up something from my iPhone notes that feels as though it was written in the prehistoric times. I can moan away and know that you’re seeing it instantly and that you’re all thinking stop moaning, woman!

I now feel as though I have a space hopper stuck to the front of me. Picking things up from the floor is not fun at all – instead of bending I now do this sort of cantilever movement that I’ve developed – it’s very clever. I make my whole body straight and, keeping it straight, I extend my back leg and keeping my body in line with the leg (stay with me) tip my torso over like a crane. I look mad, but I don’t care. It only works for picking up light things, like dropped socks and so on, NOT babies or cats or dogs, but still. Maybe I’ll do a video demonstration for you.

What did I look like this week in the last pregnancy? Let’s have a look! 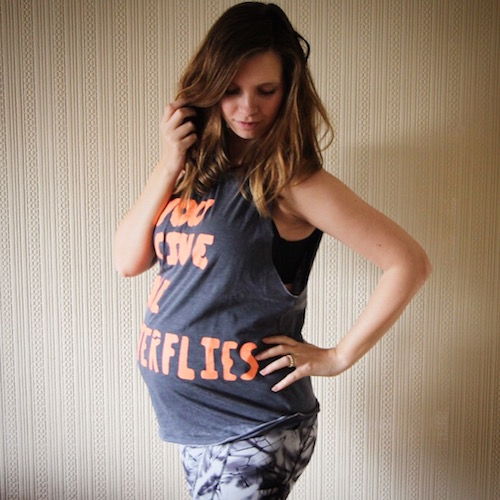 Wearing a gym kit, hohoho! What a laugh. I still have that vest – maybe I should start reenacting my previous pregnancy photos for you and try to squeeze into the outfits I wore. And look at my hair! Luscious! And my arms – no cottage cheese cellulite there… Humph. Here I am this time around, for comparative purposes: 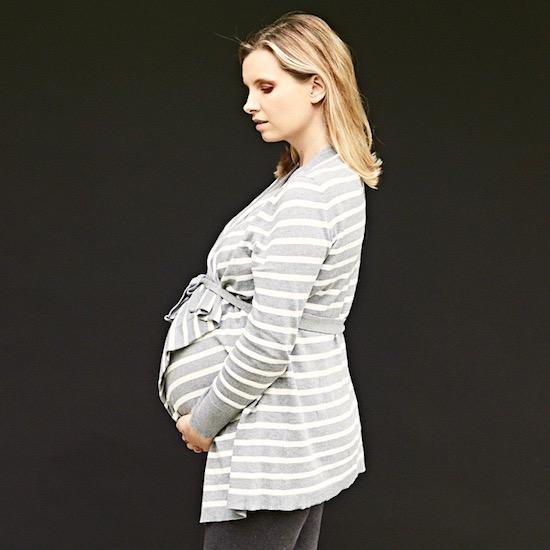 Much bigger in the bump, though I think the size difference is actually starting to level out a bit. It was most noticeable in the first trimester, when with Angelica I wasn’t even showing but with this baby I started to show straight away. Getting “congratulations!” at 7 weeks was odd. Especially from a reader, in the street, when I had only really just got my head around the fact I was pregnant myself! I didn’t quite know what to say…

In other news my bladder is becoming slightly problematic, in that it has virtually no capacity and feel as though I’m going to wee myself even if there’s only 25ml of liquid ready to come out. I think I need to pay some serious attention to my pelvic floor, which has been – until now – neglected. I have a funky little gadget I was sent, an Elvie, and I might have a go with that even though the idea of having to place it in the vajayjay somehow makes me feel nauseous. You put it in like a tampon (even the word tampon makes me feel sick, what’s going on?!) and then when you do the squeezes with your muscles it connects to an app and tells you how you’re doing. Have you heard of these gadgets? I think it’s actually an incredibly good idea, because so many people have no idea whether they’re doing Kegals properly… You can find more info on the Elvie here. It’s quite dear at almost £150, but I suppose a small price to pay for not wetting yourself in the queue at Tesco…

Most-worn maternity item of the week is the 4-way cardigan, again from Jojo (was meant for the maternity lookbook but I had a lot of stripes going down, so it’s here instead). I’ve had many compliments on this, and a few non-pregnant people asking where they can buy it! Always a good sign, don’t you think? Nice to know you’re wearing something desirable and not just the booby prize, so to speak. FYI, you can get it here online – it also comes in Navy.