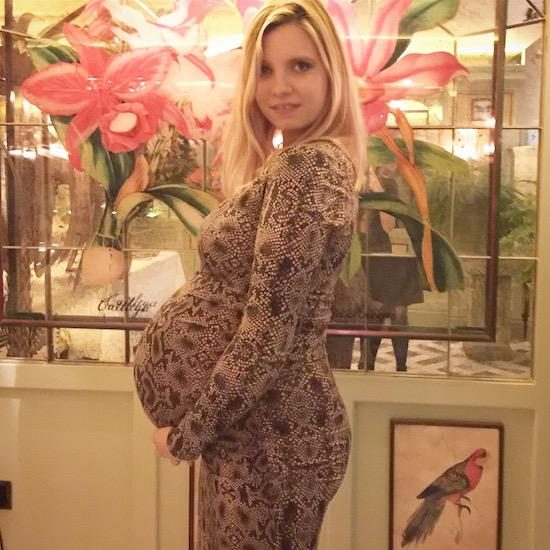 Oh! Where did the posts for weeks 27 and 28 go? I’m so sure that I wrote them! I also filmed some vlogs, but I have no idea where the footage is. Perhaps I’m finally going stark raving bonkers. It’s been on the cards for a while…

What’s been happening, you might ask? Well, the past few weeks have been dominated by the whole VBAC debacle (posts here and here, if you need to catch up) and, to be quite honest, there haven’t been many other developments. Lots of quite painful kicking into the bladder (the baby is breech at the moment – seems to be my trademark) and weird sort of rummaging sensations, which I’m sure I didn’t have last time. It’s as though the baby is spreading its fingers and kneading me from the inside! There was a shocker of a moment the other day when (please skip this if you’re at all squeamish) an elbow appeared through my Teletubby tummy window.

Yes, that’s what I said. My Teletubby tummy window. Please tell me someone else has one of these. A big, round, stretched piece of skin where their tummy button used to be that is virtually transparent and around the size of a very small saucer? Like an espresso cup’s saucer? It freaks me the hell out, I’m not afraid to say. It’s tight as a drum and I keep thinking I might suddenly see the baby’s face pressing up against it, like an astronaut at a spaceship porthole. Christ, imagine. Anyway, the next worst possible thing happened, which was the elbow appearing. I didn’t even notice it, but I went to get up from the table and something caught (UGH! UGH!) on the edge of it, it felt like I’d caught my coat button or something except that I wasn’t wearing a coat! There were no buttons! It was a little elbow.

Has that happened to anyone else? Angelica was very self-contained and really didn’t make herself that known whilst she was inside, this one is like a hyperactive chimp! Although things peaked, I think, in about week 27 – the movements are a lot more bulgey and rolly now, rather than sharp kicks and stabs. I had forgotten, though, how comforting the movements are – in comparison to the first trimester, or in fact up until 20-ish weeks, when you have no real way of knowing how the baby’s doing. Though some mornings I wake up and freak out if I don’t feel any kicks of movements in the first half an hour – it sets me up for a really bad day if this happens, because I hate myself for panicking and the anxiety puts me on edge even when the movements have started up again.

In other news, I’m making a concerted effort to eat more healthily (she says, chomping on a mini Magnum!) and get more greens into my diet. For dinner I quickly cooked up a load of baby spinach, garlic and fresh red chilli in olive oil, threw in some tiger prawns and tossed the whole lot together with penne pasta. It was delicious and I need to stop being so lazy with my food – it took eleven minutes in total to make my dinner (husband has man-flu so I very nearly just made myself a cheese sandwich!), surely I can find eleven minutes each night to just chuck some fresh things together in a pan. Surely. (*makes a mental note to add “eating properly” to my current “things I wish I had time for” list, which includes “washing hair” and “cutting toenails” and “finding online banking details”*)

The whole being pregnant whilst having a just-toddling toddler issue goes from strength to strength – I’m not sure whether it’s getting easier or harder as the pregnancy progresses. I’m finding it more difficult to pick Angelica up – I can barely get off the floor myself let alone lift her at the same time! – but then she’s walking quite well and seems to be relatively stable so at least I don’t need to hunch over quite so much. I don’t feel as tired as I did previously, either, though I can’t do much in the way of physical exertion – I nearly gave up wheeling the pram up our road today! We were off to the park and I thought I’d have a heart attack before we even got to the top.

In summary: I’m very, very large in the stomach department (“you’re all bump!” people keep saying) and I have a stretched skin window that might or might not at some point reveal a baby face, if I happen to be looking in the mirror at the time. Marvellous! It’s all going swimmingly – I’ll try to get back to the weekly diaries from now on, seeing as there are only ten left…

(The gorgeous snakey dress in the photograph is the Willis dress from Isabella Oliver – you can find it online here.)