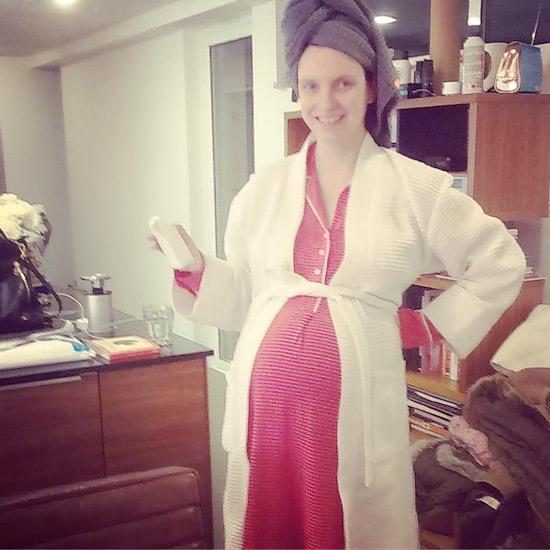 (About this photo: sometimes Mother takes photos of me on her mobile phone, and then she looks at them at says “ooh now that’s a lovely one”, and then she sends it and I expect it to be some sort of Testino masterpiece but it turns out like…well, this. Usually they don’t see the light of day but a) I have no other genuinely-39-weeks-pregnant photos and b) as you’ll gather from my next few posts (patience is a virtue, timing is blatantly not one of my virtues), I am no longer in the position to take any more 39-weeks-pregnant photos! HINT HINT!)

So here we are: 39 weeks pregnant and at the end of the pregnancy line. As I’m having an elective section two days before my due date, this will be my last entry in The Pregnancy Diaries. I do hope that you’ve enjoyed following them – now we switch to the “Baby and Body Updates”, which have cuter pictures, so a win-win situation for you all, really!

Read all of The Pregnancy Diaries…

Nothing wildly outrageous to report for 39 Weeks other than that my boobs have started to grow and it’s getting really difficult to turn over at night because of the weight of the baby. He/she seems to settle into position when I lie on one side, but if I stay for too long it becomes almost painful to move – the pains in my bladder are excruciating! And I think in my bowel, too, though it’s all so close together down there, isn’t it? It’s hard to know where sensations are coming from!

Talking of bowels: my poo went completely black because of the iron tablets I’m having to take to “build up my levels for the birth”. I found it weird to be given them when nobody had mentioned my levels before, but maybe this is just standard before a section? Anyway, jet-black poo is a surprise – never had that one before. The tablets seem to be constipating me a bit, too (aren’t you so glad that you tuned in for this? Ha!) so I’m trying to keep really hydrated and eat dried dates and almonds and high-fibre things. Without sending my sugar levels soaring, because I’m still monitoring my phantom/not-phantom Gestational Diabetes. It has become rather addictive, seeing what various meals and foodstuffs do to my levels! Though I’ve not been as strict as before – this morning I ate a scoop of ice cream at 4am to “soothe my throat”, the night before I did treat myself to un petit peu: Lindt Chocolate Santa.

Read my 39 Weeks Pregnancy Diary for Baby Number One…

Ha – just reading my diary from the same time last pregnancy (link above) and the fact that I scheduled it early in case I went into labour. Little did I know that I had another two weeks to go! The similarities are astounding though – I was still working away, right up until the last minute. Lifting heavy suitcases, that sort of thing. It feels very different, though, knowing which day I’ll give birth – unless I go into natural labour in the next few days, that would be a surprise! I keep dreaming I’m in labour and that my waters have broken, which doesn’t make for a peaceful slumber – in fact I’ve turned into a bit of an insomniac, really, waking at about 2/3am and not being able to sleep again until 6.

I have a rotten cold at time of writing, and there’s not a lot you can take for one when you’re pregnant. I remember getting a bad cough quite late on last time and worrying that the coughing would send me into early labour. This time, just a heavy head and a stuffy blocked nose, but I still fear for little twinges when I blow it too hard!

Right – I’m off to have a baby. See you on the other side – I’ll update as soon as I am able, but make sure you’re following me on Instagram here as I’m sure that will be the first place I’ll pop up the news!

Thanks for all of your wonderful, enlightening and often downright hilarious comments and anecdotes throughout this pregnancy. I know I’m sporadic – at best – with my replies, but you all leave so many and it takes me hours just to read them, let alone type responses! But I really appreciate them, it’s like having a little personal forum. So thank you, sincerely.

Oooh! I almost forgot that there’s a video! Bloody hell. Brain like a sieve.