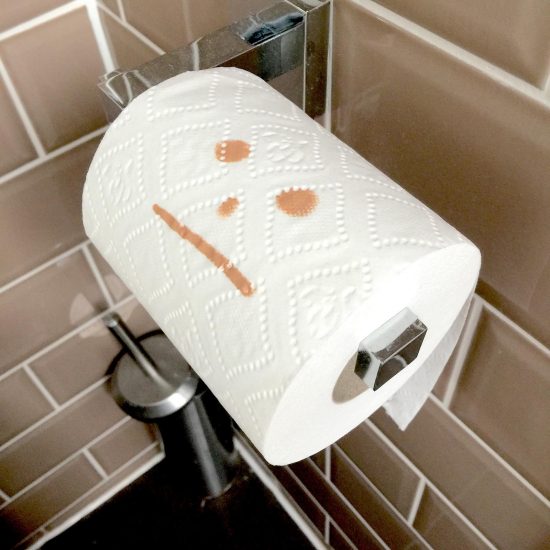 Imagine running through a train station because you need a wee. Let’s say it’s Euston station in London, for argument’s sake, because if you get off at the far platform it’s about seven miles to the loos. Anyway, you’ve been on the train for two hours and the loo was out of order, which wasn’t so much of a problem when you were comfy and semi-napping in your seat, but now you’ve stood up, you’ve exited the train, the cold winter air has hit you and you’re absolutely desperate for a wee.

So you’re running through the station and it’s quite possible that you might wet yourself – the faster you run, the more you need to go. You can see the toilets – the sign is in sight! Where’s your twenty pence piece and your ten pence piece for the entry fare? (Is it still 30p? Haven’t been there in a while.) You find them. Relief will be yours. But hold on – what’s this? A sumo wrestler is standing in your way. Now he’s throwing you to the ground and now he’s sitting on your bladder! Will it burst? It’s quite possible. He rolls off after ten seconds when a policeman shoots him with a taser gun (true story) and you get up and finish your hobbled race to the finish line where – oh – the relief will be so joyous. You must have about ten litres of liquid in your bladder it’s that full – your whole abdomen is distended, there are shooting pains through your groin area – will you make it into the cubicle?

Inside the ammonia stink of the station toilets, a cubicle becomes free. You have undone your jeans before you even make it through the door, you sit on the loo (hygiene out of the window in this situation) and lock the door at the same time, in some unlikely expert move. Here it is: blissful – near-orgasmic, in fact – relief. But what comes out?

I’ll tell you what comes out! The Wee of Disappointment! A thimble-ful of urine, if that much, and it trails out in a little hot trickle. A hot, disappointing trickle.

The Wee of Disappointment, Ladies and Gentlemen. Characteristic of most pregnancies (according to my research), especially in the first and second trimesters. You think you need a wee, but in fact there is about as much liquid in your bladder as the dregs in your Costa cup. It’s trickery of the worst kind – there’s absolutely no correlation between how much liquid your brain thinks is in your bladder and how much liquid is actually in your bladder. It’s sort of like having cystitis, but without the burning sensation – just, as they so politely put it in medical terms, the “urgency”.

And all of this in early pregnancy, too, before there’s even any real weight bearing down on the old wazzing organ – at twelve, fourteen, sixteen weeks I was uncomfortable enough in the wee-wee department to draft this post, but at thirty-five weeks I have the added stress of a gigantic baby head resting on my bladder. Now, at this late pregnancy stage, things have progressed from Wee of Disappointment to Wee of Absolute Necessity – the baby churns about and twists around, probably (it feels like) holding my bladder in its hands like some holy chalice. There have been a few tense moments when I’ve thought that my bladder was actually being ripped from its moorings, but everything seems to be reasonably in tact. So far.

I’ll tell you what, too – bladder capacity is at an all time low during pregnancy. I swear that from the first few weeks I become like a Tiny Tears doll. In one end, out the other, all in a matter of minutes. It’s as though my entire urinary tract, with all of its bendy tubes and winding pipes and so on, gets replaced with a short length of plastic drinking straw. No ability to retain liquids whatsoever. Though – weirdly – if I’m sitting at my desk, I can go for hours even whilst drinking copious amounts of water from my flask. It’s only if I’m out and about that things start to go wrong. Show me a walk in the countryside and I’ll show you five good, secluded places to stop for an emergency tinkle. Show me any journey on the London Underground and I’ll name you the nearest department stores with clean facilities. I’m a veritable wee-wee expert.

Anyone else suffering with Wee of Disappointment Syndrome? (WODS)