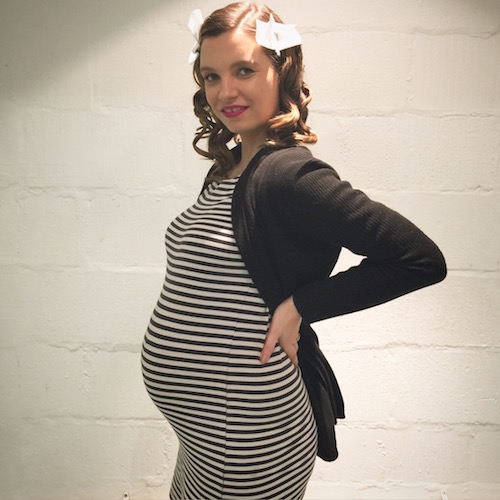 I stepped out of the door on Friday and managed to pull both of my calf muscles! Now please don’t jump to any conclusions; it wasn’t as though I was doing lunges out of the door or anything funny like that, just plain-old walking. My boots were my trusty old Belstaff biker boots, which have a 1 inch heel – nothing to write home about in terms of health and safety violation… I hobbled my way to the train station and then, as I boarded the train, I did something to my hip! It’s as though my ligaments have been replaced with short lengths of elastic, but the lengths of elastic have a kind of “bi-polar” thing going on where one minute they don’t give and the next, they allow my body to fly off in all kinds of different directions. Fast forward to Sunday and I have added a weird shoulder crick and a lower back twinge to my list of ligament disorders.

Oh well. I think this may be an excuse to buy some new ballet pumps! Hopefully we’re nudging into spring and the weather will be kind to the non-sturdily shod. And also those who are too large to get into any of their winter coats – or summer coats, for that matter. For me, coats have become mere shawls – I slip my arms into them and that works okay, but there’s no point even attempting to do them up. My once-lovely wool wrap coat from LK Bennett makes me look like a fat friar, my cashmere Burberry trench suddenly has the appearance of an ill-fitting dressing gown. And I’ll be damned if I’m going to spend hundreds of pounds on a maternity coat that I’ll wear for about two months! So, hurry up spring. I need you. Otherwise I’ll be fashioning outdoor clothing out of bits of tarpaulin and builders’ rubble sacks!

Oh yes – I haven’t mentioned until now, but I have to move house once, potentially twice, before the baby arrives. I’m having my entire house renovated. Crazy timing, I know, but we’re too far in to stop, now, it’s like a big monster project that has run away with all of our time and money. I’ll write about it more this week, probably on A Model Recommends, but I have to say that from a pregnancy point of view, the whole idea is making me feel very uneasy. Having to pack up your whole house, when all you feel like doing is snuggling down and sorting out your photo albums? Not ideal. And it’s also unlikely that the work will be finished in time for early June, so I’m either going to bring baby back to a strange rented house or to my own house that won’t be quite finished… My sensible head is saying stick to the rented for a while and avoid the noise! It’s all going on…

In other news: I went to have a maternity bra fitted. I popped to Debenhams, mostly because I was walking past it. Or I should say hobbling, on my two pulled calf muscles and with my dodgy hip. I’m having trouble with my bras; as a lingerie lover I always thought that I would jump at the chance to buy new underwear during pregnancy, but actually, as it turns out, it’s the last thing on my mind. The slightest pressure around my rib cage really hurts at the moment (bones moving, ligaments stretching, etc etc repeat to fade), and so the moment I put a bra on all I can think about is the delicious moment that I’ll be able to take it back off again.

I had been wearing the softest, most unstructured bra I could find (this one from M&S) but the ladies at Debs said I needed more structure and fitted me with this one, in a 34E, which has cups that honestly fit over the top of my head. My boobs don’t even feel that much bigger (I was a 32DD/30E before) but I think that my back has definitely become broader. Even the 34 feels snug. Ouch. I managed a whole day in the new bra yesterday. I lie, I managed until 3, then took it off to watch Game of Thrones and have a nap! A five hour bra stint, pretty good going…

*written at 24 weeks and 6 days pregnant