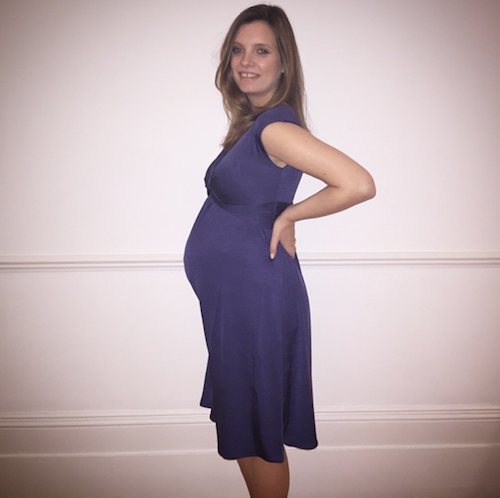 Creeping on in with the “26 weeks pregnant” diary entry one hour before the cut-off – it’ll be 27 weeks by the time I wake up! I had massively good intentions for this blog last week – loads of post ideas and so on – but I have been moving house, so I hope you’ll forgive me! I think I mentioned this before; we have to move into a short-let as our house is being completely stripped out and renovated. It’s all a bit of a nightmare, really, because the last thing you want to be doing when you’re pregnant is packing up and changing homes, and you definitely don’t want to have to be doing it TWICE! (We move back in May.)

Hey ho. I think I may have overdone it, at any rate – I’m beginning to realise the limitations that pregnancy brings. I know that some women run marathons, sail around the world, give birth whilst abseiling and all of that, but – quite frankly – doing up my shoelaces is enough bother, and so trying to pack my office and my beauty room and all of my clothes into boxes has completely shattered me. I’ve also had quite a few big work commitments, one of which was a long filming day at the end of  last week, and I just can’t wait to be able to sit about for a day or so and do absolutely nothing. Well, not nothing: catch up on writing all of these pregnancy blog posts that I’ve promised!

Week 26 of pregnancy has been mostly dominated by aching ribs. Oh my God. It’s as though they’ve been hammered with a baseball bat! Any and every bra hurts me after around two hours and I have to sit with my back arched and my tummy and boobs thrust forward, which looks ridiculous and can’t be amazingly good for the old spine. I try and not wear a bra whenever I feel that I can get away with it, but here’s the dilemma: not only do I have achey ribs, but I’m convinced that my boobs are getting lower. Is that because I’ve been skimping on the bra wearing? After all, my (previously) 32DDs have always been well looked after in the lingerie department, I’ve been a stickler for a good bra ever since my late teens. So are the boobs in shock at having just a little too much freedom? Albeit only in the evenings and (sometimes) the late afternoons… Or do pregnant boobs just get lower and lower? Mine sit on my belly when I sit in the bath, as though it’s a little handy boob-shelf!

What else? Ribs, boobs…oh: belly button! It has started to pop outwards! At the moment it’s just the top half of it, but the rest can’t be long now. There’s this weird round shadow around the whole area, the skin is thinner and slightly darker and when you press it it’s almost as though you could stick your finger into the depths of your body! Gross. But that hasn’t stopped me prodding a bit. And if I ever prod or press on my stomach, I get an irritated kick in response from the Tummy Inhabitant, which is quite fun. Though the only downside of feeling the whole “kicking and moving” business is that when you don’t feel anything for a while, you start to panic. Or I do, anyway. I know that it’s usually because I’ve been dashing about and not sat still enough to notice the moving, but it still freaks me out if it all goes quiet down there. I have to manoeuvre myself into ridiculous positions in an attempt to get the kicking started again. And then when it starts (usually just before I want to go to sleep) I wonder why I was ever panicking…

I must go and start unpacking my suitcases, otherwise I’ll never get to bed. I haven’t a clue where my pyjamas are, or which case I packed my toothbrush and washbag into – all I have on me is my laptop, a book on Mindful Birthing and three cereal bars!