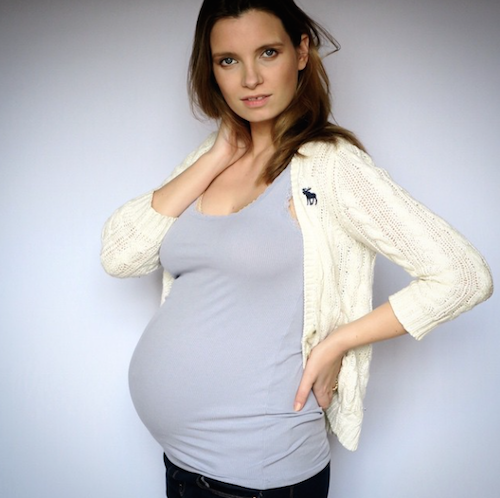 Well, this week has been a bit of a shocker in terms of stress levels, what with packing boxes and having to drop off Mr Bear the cat at my parents’ house and moving and then realising that there is absolutely no reception at all at the place we’ve moved to… I feel as though we’ve landed on another planet! I mean, the reception is terrible at my permanent home (we’ve only moved out because it’s being renovated) and so you’d think I’d be used to it, but here you have to stand on the loo seat and wave your iPhone up in the rafters to get just ONE BAR! I tell you what, I will never moan about our phone reception ever again once we get back home.. And all of those fancies I had about moving further and further out into the sticks one day, until finally I built a house in the woods? No. Not going to happen. Ever.

Anyway, pregnancy. Popped to the GP (managed to get an appointment – hallelujah!) and she basically did exactly what they do at the Midwife appointment; checked blood pressure, checked wee, had a little listen to the baby’s heartbeat with that microphone thing. I put on a funny voice and said “hello, out there!” when she was listening, which did make us both laugh. Although I think she was just humouring me because she thought I was slightly eccentric. I had turned up to my appointment wearing a dress and mud-caked wellies, after all.

About the wellies: I have taken to wearing them quite a lot because they have no laces and you can just slip them on and off, but I must say that you do get odd looks if you wear them inappropriately. For example to the doctor’s surgery or to Tesco. And they are an absolute b*stard to drive in – don’t ever try and drive in wellington boots, it’s plain hazardous. By the time I’d managed to successfully press the brake pedal, which took about three attempts, I jammed it down so hard I almost gave myself whiplash! It’s worse than driving in flip-flops!

The ribs continue to complain every time I wear a bra, which is awkward: not only are ribs supposed to be mute (hohoho), it means I have to keep going bra-less for hours at a time, which in turn means that I’ll have tits down to my knees by the time I have this baby! Unless I just stay horizontal, which would suit me fine if someone just invented a laptop that could be suspended above my face, from the ceiling, and a keyboard that could be thought-controlled.

Book of the week: First-Time Parent by Lucy Atkins. It’s no-nonsense and unstuffy but doesn’t try to make lame jokes about everything and has lots of very succinct advice on what you need, equipment-wise, when the baby is born. It also talks a lot about how to soothe your vagina and perineum after birth, which worries me somewhat. Frozen peas feature heavily and also jugs of warm water to pour over yourself when you wee so that it doesn’t burn so much. Oh. My. God. I’m going to try and appreciate every single minute of having a vagina that needs no soothing and wee that doesn’t burn me. And I hadn’t even thought about my perineum before, but I’m going to appreciate that too.