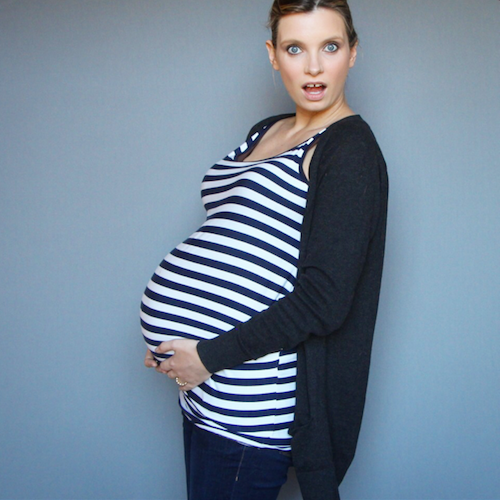 I am having a little freak-out, this week, if truth be known. I’m overwhelmed with a sense of what I can only call unreadiness. Perhaps something to do with the fact that – really – baby could come at any time, yet I have no clothes for him/her, no nappies, no crib, no pram. I do have boobs – ticked those off last week’s list – but they don’t look ready at all. They’re just all normal and boob-like, sat there, wondering what all of the fuss is about.

Perhaps it also has something to do with the fact that I am a kind of holiday-let refugee, moving from one place to the next with no fixed abode, wondering which area of the country I’ll be in when the roulette wheel stops turning and the baby makes an appearance. Will it be Hertfordshire? Will it be Cambridgeshire? Who knows! How thrilling! Except it’s not thrilling in the slightest – it’s scary. I feel like a vulnerable chick that doesn’t want to be hatched yet – I can see the light through my thin little egg shell but there’s no way I want to go into the outside world. I want to stay in my eggshell for at least another two months! I have so much work to do while I’m still in my eggshell (where did this crappy analogy come from? Someone put a stop to it) and I just want to roll myself to somewhere safe and solid where I can hunker down and I won’t be asked to move again.

A little moan about my current holiday let: there is no working tin-opener, there are only four tall glasses for drinking out of and four knives and forks. ONE TEA TOWEL. I wouldn’t mind, but bloody hell – it’s far from cheap! I swear that if I ever come into a lump sum of money, I’m getting a holiday let. I’d put loads of cutlery in it – LOADS – and it would have a garlic press and a nice stack of pressed tea-towels. And even if it slept four, I would provide more than four plates and more than four cups. Because people tend to – y’know – eat and drink more than once in a day.

Sorry to moan. I think that things have finally weighed me down this week, including the fact that they found a huge Victorian pipe in my house groundworks which is going to cost loads to circumnavigate. I feel as though I’m on one of those nightmare Grand Designs episodes, and I don’t even have the joy of Kevin McCloud’s company! I also have a semi-sick dog (all right one day, off the next) and more work to get through than I have ever had in my life. It’s emotional here, I can tell you. I can only be comforted with a Cadbury’s Creme Egg, and even those are about to run out on me…

Brilliant body-changes of the week: baby movement marathons. I mean, my whole stomach moves from side to side, and if I rest my kindle on top then sometimes it completely bounces off! I didn’t ever think that movements would be that massive; it’s like Alien. Big churnings and tremblings and then egg-shaped protrusions coming out left right and centre… I absolutely love it. How utterly, utterly wonderful – a whole different person, sat inside like a little bus passenger! Ding-ding, next stop please driver! (Or hopefully it will be quite a few stops. We have the equivalent of a Greyhound journey across America to do yet, with six-and-a-half weeks to go! Surely enough time to completely re-build a house, schedule a month’s worth of posts and videos and get to grips with the whole Mindful Birthing thing?)

Not-so-brilliant body change: foot cramps. Oh my God cramps hurt, don’t they? I used to get them in my early twenties and then never since, but they have come back with a vengeance. Funnily enough, they went away when Mr AMR force-fed me about a litre of water in the middle of the night. (Poor man had to get up at 6am to go to a shoot and he was massaging my leg at 2am. He’s definitely a keeper. I didn’t even have to ask.) Also: weight of bump. It feels as though it needs a little scaffold beneath it. I’m wondering how much it might grow in these last six or seven weeks? A lot? How is that possible? I’m going to be shaped like a ball!