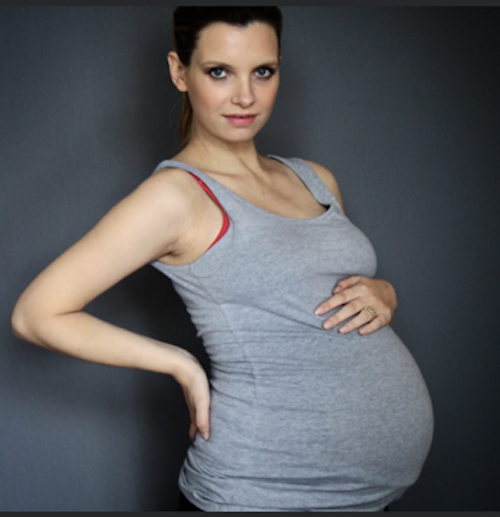 I meant to say in last week’s diary entry, but it was a short one and I forgot: I feel as though I keep jinxing myself a little bit when it comes to pregnancy ailments. Basically, I have had nothing to really complain about, health-wise, throughout my entire second and third trimesters. All of the “common symptoms” that I was half dreading and half (in a weird way) looking forward to simply failed to materialise; the insomnia, spots, the huge amounts of weight gain, the constant hunger, the indigestion and swollen boobs and backaches and foot-aches and all of the other things that seem to be regular compliants. Flatulence, constipation, headaches, cravings, mood-swings – me? Nada.

Until last week. No sooner had I told someone on Twitter that I had had “very few pregnancy ailments since the first trimester ended” than I developed the most annoying sore throat and cough and cold. I literally couldn’t breathe through my nose and had to sleep in a semi-sitting position. (Still am, actually, though feeling marginally better today.) Now I know that a cold isn’t really a true pregnancy “side effect” because everyone gets colds, but still: jinx!

I’m going to do a little run-down of the symptoms I have had during pregnancy so far on a little timeline thing, because I had most of my ailments right at the start. (In fact I couldn’t even walk with my head upright for about four months, I felt so sick, so maybe the smoother months that followed were a kind of reward!) Only now (36 weeks tomorrow) am I starting to get the little niggles that I imagined I would; having to go to the loo for a wee every hour, getting swollen ankles if I walk too far…

Breast leakage! I almost forgot to tell you! Sorry of this is too much information, or “TMI” as they say on the pregnancy forums (don’t go on there, it’s the fastest way to mess with your own head), but something is definitely going on in the mammary department. The troops seem to be gathering forces. I don’t know what the hell they’re producing, but it’s burning holes straight through my Wacoal soft bras. I’m beginning to think that maybe I’m an alien and lactating some kind of acid. I asked the midwife but she just laughed. I pointed out that some beauty treatments use lactic acid as a kind of exfoliant; she didn’t laugh at that, but whether that was because she was completely weirded out or simply dumbfounded by my wealth of beauty knowledge I do not know. She finished my blood pressure in silence.

I’ve had two minor breakdowns this week: the first when I was told that I wouldn’t be back in my house for ANOTHER four weeks after the extended-extended building deadline. I just felt at the end of my tether. It means moving to another holiday let after the next one we’re in, and it means faffing about from place to place with a newborn, rather than just having the baby, waiting it out two weeks and returning home once and for all. Second minor breakdown was last night at 2am when I started Googling (DO NOT DO THIS) about coughs in late pregnancy. “My doctor told me that severe coughing can start premature labour” said one woman. “Well my coughing ruptured a vein and the baby nearly died,” said another. Christ! I only logged on to see if I could take that sugary cough linctus stuff to stop my throat tickling! By the time I turned off my iPhone I was convinced that I had two fatal viruses, needed an extra ultrasound to check the baby’s development and could possibly go into early labour if I coughed violently just one more time. Bad Doctor Google.