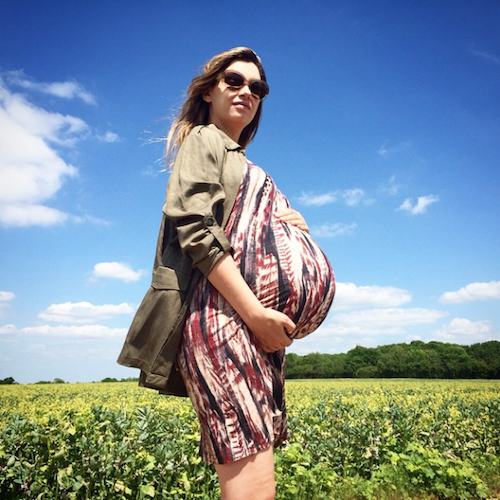 Just drafting out a few sentences here, in case I go into labour before I write a proper diary entry! If this cuts off at a weird point, without a photo, then I’ve more than likely gone into labour without being able to amend it. I’m scheduling for this Saturday so it will publish whatever happens, like one of those failsafe plots on action films where the person arranges for information to be leaked to the world if they get kidnapped or whatever… **UPDATE: I haven’t gone into labour! I just completely forgot I’d even scheduled this post. What a div! This is why I’m not an FBI agent or something…

Phew. 39 weeks. I can’t quite believe it and actually, I think I’m rather in denial that I am going to give birth and have a baby! I’ve been terrible at planning and getting prepared – I’m still working, for crying out loud! I haven’t stocked my freezer with “handy foods”, I don’t have a birth plan (just get through it with minimal intervention and fuss would be the gist, but not sure that constitutes a plan) and I still keep forgetting that I have a big bump and doing stupid things like lifting heavy suitcases… Mind you, my Mum was the same, by the sounds of it. So I’m not going to feel too bad. Though I have started to feel a bit nauseous at times, and there have been a few little twinges in my “area”, so who knows? It has to start at some point and labour will probably take me completely by surprise, coming on early when I’m still filming a beauty video or something.

I have been overjoyed, when taking stock of my pregnancy “ailments” about just how fine I have felt in later pregnancy. Early pregnancy was a flipping nightmare, what with morning sickness that felt like the worlds’ worst constant, neverending hangover, and an almost obsessional paranoia about whether I would miscarry again. But after that rocky little trimester, I actually think that my health has been better than it was when I wasn’t pregnant! Not a single backache twinge, really, for months (even then it wasn’t terrible), no heartburn, no constipation or the other thing (parp!) and, most importantly – because I feared this more than the plague – no bladder infections. As an expert sufferer of bladder infections, I was almost certain I would get one during pregnancy and I was absolutely dreading one coming on. Not quite so easy to treat when your antibiotic choices are limited (though I hate antibiotics anyway and do try to avoid them when I can) and with a constant pressure on the bladder anyway, I can imagine that a bladder infection during pregnancy is just the most miserable and dire experience ever. So: thank you God. Or whatever/whoever is up there.

Forty weeks on Monday – this is where you start to regret having told anyone your due date, because there’s this massive sense of expectation. I’ve been reading quite a lot about due dates and how people kind of plan around them and treat them as gospel, but really they are just the roughest guide ever. Anything from 37-42 weeks is full-term and normal, which is a massive spread of weeks. I wish that I had just told people that the baby was due “sometime in June” – that would have been so much easier! But then I suppose that my week-by-week diary wouldn’t have been quite the same if it was all a bit ambiguous.

I just have a couple of bits of work to finish off now, but there’s no actual deadline so I suppose that to all intents and purposes I am “on maternity leave”. Except that I’m still sat in front of my computer, editing video and surrounded by beauty products. I don’t really know what to do if I’m not working – we go on dog walks and I do like reading, but I feel angsty and impatient if I watch television for more than an hour and my energy levels aren’t high enough to do anything strenuous like shopping trips and so on. Hence: writing up four posts for The Uphill so that you have some stuff to tide you over when I’m giving birth/nursing my private parts/having burn wees/working out how on earth to look after a tiny human being.

Right – see you for the “Pregnancy Week 40” update? We will see!