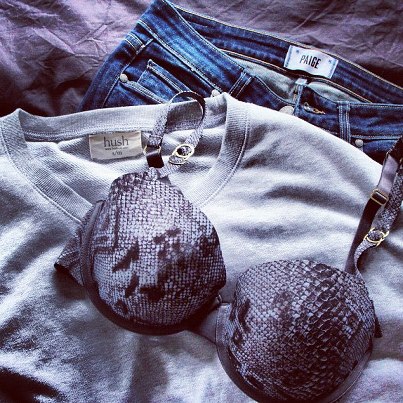 Stella McCartney’s new-ish “Stella” lingerie is well worth a good look. Breaking free from my addiction to Calvin Klein’s Customised Lift bras (it was getting boring, I had five in different colours!) I decided to funk things up in the underwear department. I went for a python-print bra and three – yes three – pairs of laser-cut briefs. (Because you never have enough matching pants, do you?)  The briefs are a thing of wonder and I adore them. The bra comes up slightly tight around the ribs, but actually stretches out quite quickly, so you only have to endure one excruciating wear! And, if you’re intelligent, you’ll do the bra up on the outer hooks to begin with and gradually move tighter as the bra gets looser. (Common sense, apparently. I lack it.)

There are lots of gorgeous things in the Stella range – it’s quite a bit cheaper, too, than the original Stella McCartney lingerie. You can find most of it online at Net-a-Porter – check out the Supernatural bra, that’s probably my next investment.

My favourite at-home clothing combo of the moment is Python Print lingerie with my grey sweatshirt from HUSH and Paige Verdugo skinny jeans (both linked-to here). There’s something nice about having racy undies on but looking very girl-next-door and casual!