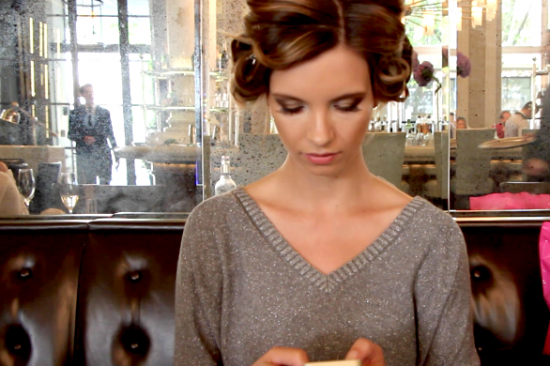 Red Carpet Preparations! I had a bit of a sartorial disaster, over the weekend; I was supposed to wear an amazing sparkly Catherine Deane dress to the TV Baftas but my shins were covered in tiny bruises from doing yoga with my Mum on her lawn. (I’m so rock and roll, it’s almost unreal.) I ended up frantically throwing clothes about in the spare room, trying to find something that wouldn’t show my legs, and eventually happened upon a silk jumpsuit that I bought last year. It’s by Catherine Malandrino, but I actually found it at TK Maxx in Bath, in the “Gold Label” section! I had been saving it for something special, thank goodness, so there were none of the usual marks and creases and stains that I manage to get on just about every garment I own… I decided to go a bit “Night Fever” with the jumpsuit and accessorise it with white leather, but more on that later.

Luckily, after all of the silly stresses of the morning, I could relinquish all responsibility for myself during the afternoon; my hair and makeup were being taken care of by Mark Hill Hair and MAC Cosmetics. I think that they did a wonderful job. Jules at Mark Hill set my hair into curls (using something called the Wicked Waver Extreme, which is bigger than the waving tool that I have here – great for longer hair) and then left them to cool for a couple of hours. When he took the pins out, my hair was set into these amazing retro ringlets! The hair matched my seventies-ish jumpsuit really well, I thought. 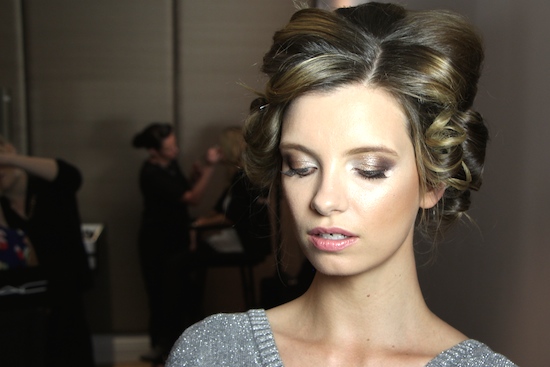 My makeup was done by Danni Adler at MAC Cosmetics – I can’t believe what a great job she did in so little time. She created a gorgeous bronzey smokey eye by using a gold base all over the lid (a Paintpot in Indianwood) and then pressed a glittery pressed pigment called Daygleam over the top. Danni used a chocolate brown matte shadow to contour the eyes and then a liquid liner to define the lashline a little bit. Eyes were topped off with a coat of mascara top and bottom and then really small sections of false lashes right at the outer corners of my eyes. The lovely creamy pink-nude lipstick is a Creamsheen shade called Peach Blossom. 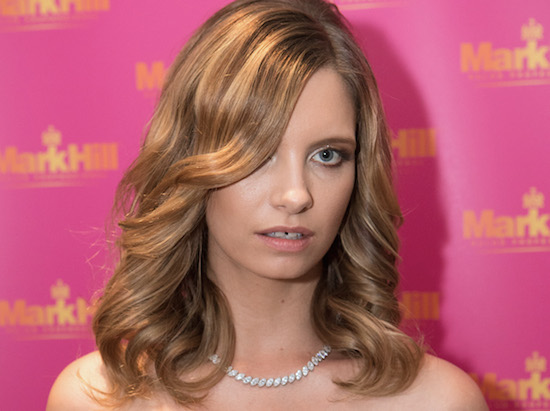 After I had popped my jumpsuit on, like Challenge Anneka (anyone remember that programme?), I did a bit of skin finishing on myself. You’ve heard me harp on about Vita Liberata’s “Capture the Light” illuminator before: over the past year or so, I’ve taken to carting a little bottle of it about with me, rolled up in a tanning mitt! I just buff some into whatever body parts are on show – in this case, my arms and shoulders. It makes so much difference – skin looks smoother and more even. You can find it online here – it’s one of the only body products out there that I would classify as proper “red carpet” because it’s so subtle and classy. Though I must say I’m looking forward to properly trying out Charlotte Tilbury’s new Supermodel Body, which promises to have a similar effect… 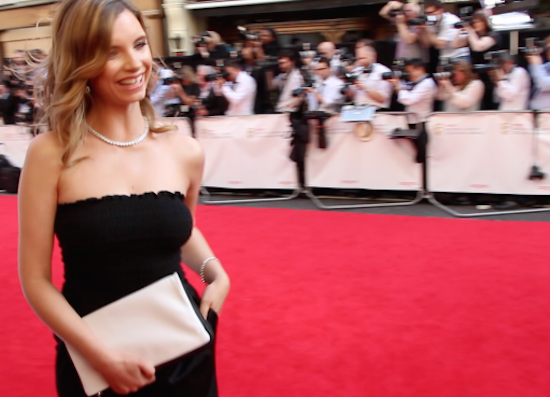 Before heading off to the awards, I bedecked myself with various accessories – a clutch from LK Bennett, my favourite Jennie shoes (you have to have these, they are just amazing) and some jewellery by Attwood & Sawyer. So many people commented on the jewellery thinking that I was wearing a serious amount of diamonds and I had to resist doing my usual “BARGAIN SHOUTING! TENNER FROM TOPSHOP!” thing, because it’s actually costume jewellery. Just really, really nice stuff. Very sparkly and beautifully made.

Have a watch of my video -there’s no talking in it, but there is a funky little music track and the whole thing only takes a couple of minutes to watch. There’s even a bit of red carpet footage, for those interested in how the paparazzi look from the subject’s point of view. If you can’t see the video, then please click here to watch it in a new window.

How cool is the dinner setting at the end? Grosvenor House Hotel had turned the whole place into a kind of inside garden, with trees coming out of the middles of the tables and huge floral displays. It looked quite spectacular looking down from the balconies! The dinner was quite delicious, too, though we didn’t eat until around ten o’ clock. (I was starting to feel a bit anxious by nine – I need my regular feeds.) We had a lovely salmon tartare to start and then a beef wellington followed by an unbelievably rich chocolate dessert that almost floored me. I cleaned the plate, though – rude not to, obviously…

I must say a special thanks to Audi for taking me to the Baftas as their guest and for chauffeuring me about between my various commitments. They just do everything with such style and quiet efficiency – they even have a secret exit from the awards to avoid getting stuck in the queues. I found myself sandwiched between Martin Freeman and James Corden as we made our way backstage and down to the back of the theatre – past the stage crew and the huge banks of electrical cables… I think that the secret exit was actually one of the highlights of my day – I felt like Whitney Houston in The Bodyguard, except that Kevin Costner was nowhere to be seen.