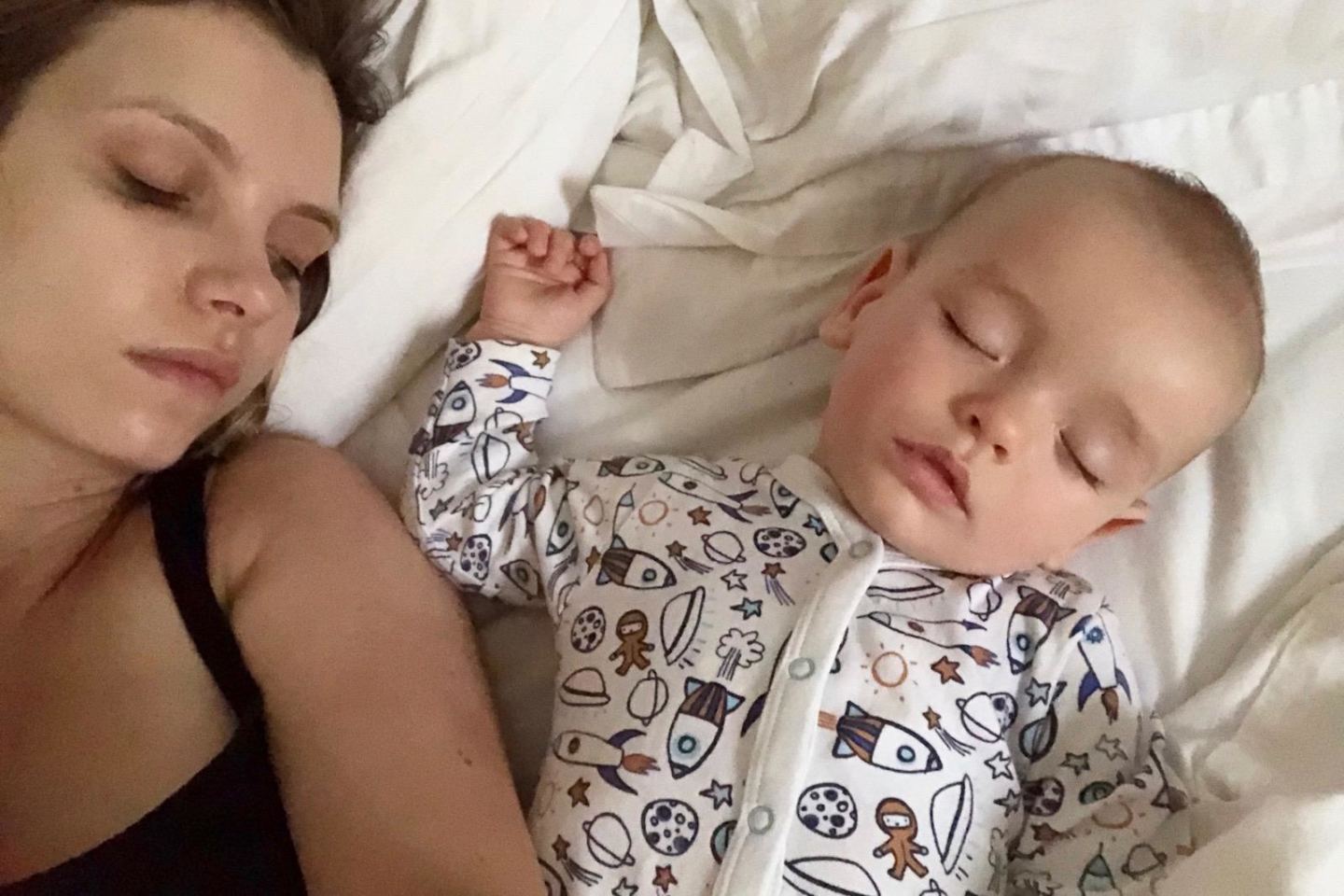 Having reached the absolute pinnacle of exhaustion (Peak Exhaustion? P.E.?), I find myself now sharing my bed with the baby in an attempt to get some sort of rest. Never for the whole night, but sometimes for about half of it and always for the period between around 5am and 7am, which is when I seem to be at my lowest ebb and unable to even sit upright to breastfeed.

So I’m a reluctant co-sleeper. Reluctant because I’m really just not into bed-sharing at all – I know that some people love it, especially those who are frequently breastfeeding through the night, but I can’t relax when Baby Ted is in the bed with me, even though he’s now a big chunky eight month old! I snooze in tiny fits and starts, constantly paranoid that I’ve rolled on him or that he has rolled onto his face and has his head stuck under my armpit or has managed to commando-roll himself off the edge of the mattress. Trying to get him to sleep on a clear bit of bed (ie, not stuck to my person) results in the same sort of screaming session as putting him down in his cot, and as I simply don’t have the energy to deal with that at 5.30am I end up with a clammy baby wedged into the crook of my arm.

You may note that I say “my” bed, “in bed with me”: I don’t know whether I’ve ever touched on this before, but – despite our best efforts – husband and I haven’t managed to share a room in a fair while. To be quite honest – and I know this will be perhaps controversial – I actually find it easiest having my own room with a new baby. We did the same when Angelica was born, until she went into her own room, and the same has happened with Baby Ted. I think that it would be different if they had been bottle-fed and he could have shared the night feeds, but as it was, I never saw the point of both of us having disturbed sleep. In fact, it was (is) far better for my husband to be running on full steam during the day so that he can be all energetic and enthusiastic whilst I mope about like a zombie in my dressing gown.

Anyway, back to the co-sleeping. I’m trying to nip it in the bud, because I don’t want to make a rod for my own back and have a baby who won’t sleep in a cot. I know there’s absolutely nothing wrong with having a baby in your bed, I can absolutely see how lovely it is and there’s something quite magical about waking up to little snuffles and gurgles, it’s just that I need to have my own space in order to actually get some rest. I’m not even that good at sharing a bed with an adult let alone a child!

(Poor husband. This is me on a typical night: “Have you got your earphones in? I can still hear the radio. No, I can STILL hear it. I can STILL HEAR IT. What, you’ve turned it off? What’s that hissing noise then? STOP BREATHING I CAN HEAR YOUR BREATHING! Can you try turning on your side? No, that’s noisier. Try the other side… Did you hear that bang in the garden? Go and see! I’ll stay here and…guard the bed.”) 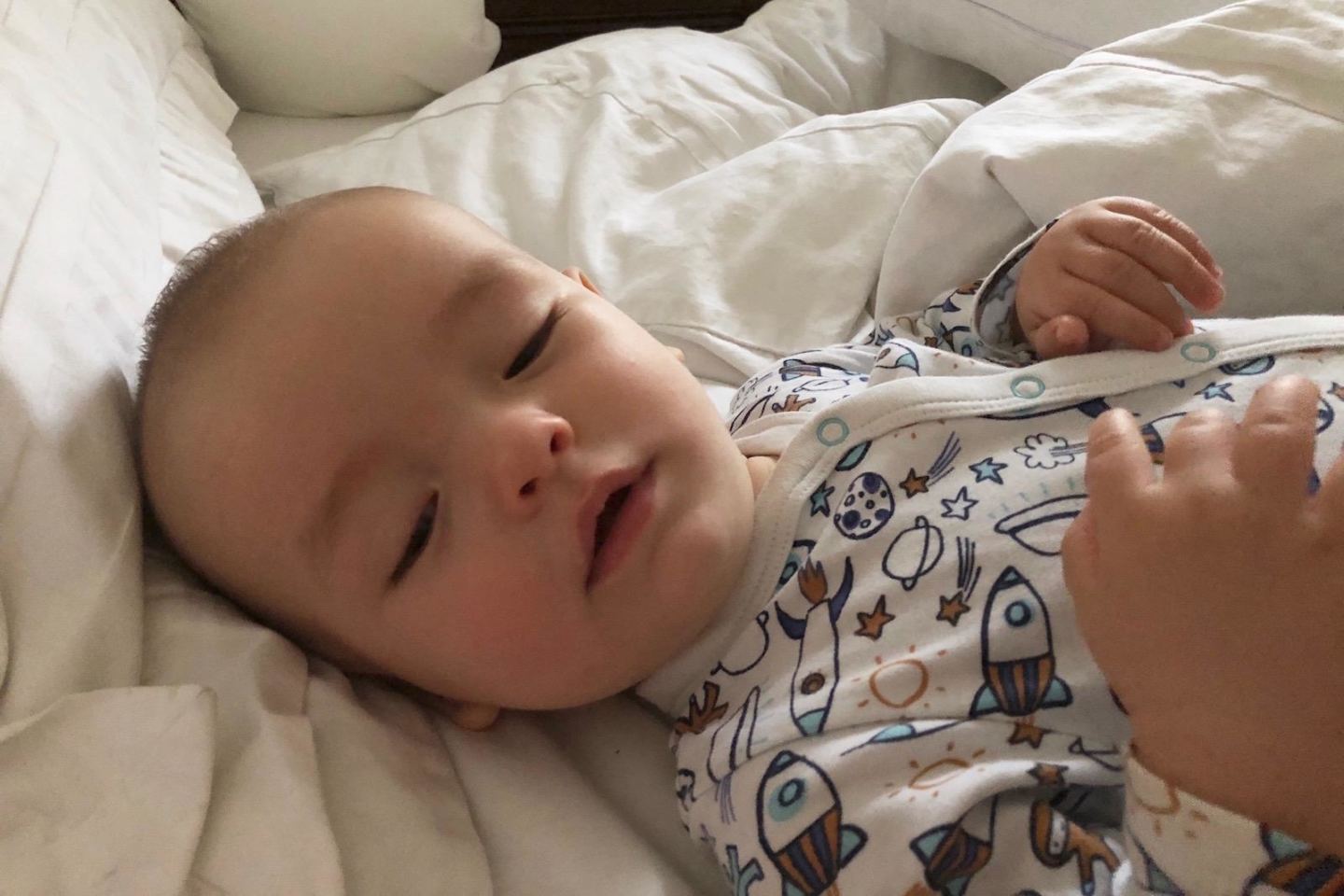 My task for this week is to try and get some sort of night routine for Baby Ted and then stick to it. I’ve been keeping a sleep diary for a project I’m doing with This Works, and I’ve realised that Ted has a proper feed at about 10.30pm and 3am but that the other waking times (1am, 2.30am, 11.30pm, 5am, 2.10am, 11.45pm, 4.15am, insert other random, exhausting numerals) are just for comfort and I should really just leave him to self-soothe. The problem is that Ted is a bit of a screamer and we are renting a terraced house and I can’t get over the fact that someone is the other side of the wall trying to sleep. I may try moving the cot into the little back bedroom which has no party wall, I just need to summon up enough energy to move my office out of it so that I can move the cot in!

Mind you, I’m not good at sleeping apart from Baby Ted so I’m probably my own worst enemy. I like to be close by and to hear the little snuffles and grunts, but at the same time I’m sure that I react too quickly when he wakes up – if he was in another room, maybe by the time I properly woke up enough to go and comfort him he would have gone back to sleep by himself. Although I did test that the other night and he cried for a solid ten minutes with no sign of giving in, so, who knows?! I remember with Angelica that everyone said “fill her up with formula and porridge and she’ll sleep through!” but it didn’t work. In fact, history seems to be repeating itself, really – I read her 8 month update and 9 month update post and the situation was almost identical…

So it’s a matter of ploughing on through and trying to grab as much rest as possible, I think. And nipping the co-sleeping thing in the bud so that I don’t wake up groggy, with no feeling left in my arm, milk patches on the sheets and a panicky sense that the baby has disappeared underneath the duvet. It’s just not conducive to a productive morning!

Comments and anecdotal material please: successful co-sleeping tips, tips for getting through the day on very little sleep, tips for settling a baby who screams like (no joke) someone in a horror movie, positive stories about babies suddenly sleeping through after many months of frequent night-feeds. Also, how many couples ended up sleeping in separate rooms for a while/long time/forever? Marvellous, get writing!