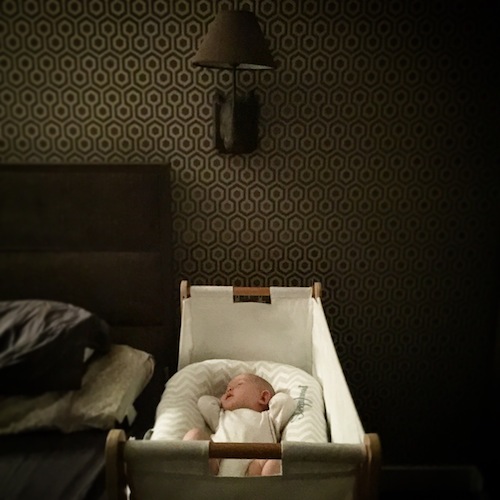 This review is well overdue, because the Sleepyhead is, I think, my most-used piece of baby equipment so far. I have used it multiple times a day, almost every day since we came home from the hospital. And never has something been recommended to me so many times, by so many different people. And so here we are, better late than never – the wondrousness that is the Sleepyhead.

The Sleepyhead Deluxe is a fabric-covered “pod” marketed as a “deluxe portable baby bed”. It has a flattish bottom section with a firm bumper around the edge that cocoons the baby. The whole thing is completely breathable, the filling has anti-fungal and anti-bacterial properties and the cover is 100% cotton and machine-washable. 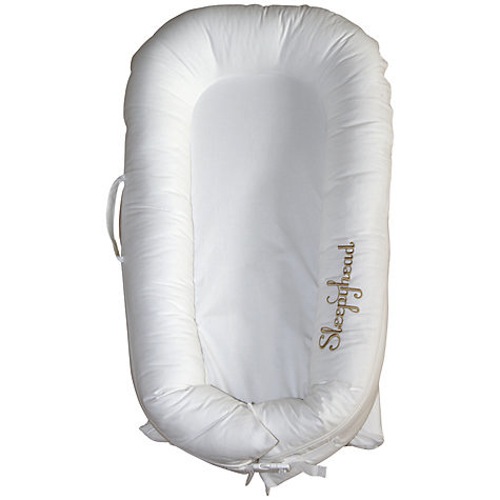 Those are the practicals, but what does the Sleepyhead actually do? Well. If you listen to the thousands of rave reviewing parents online then it’s the one-stop-sleep-shop for newborn babies, who seem to feel more snug inside the Sleepyhead rather than being all little and lost in the expanse of their crib or basket. It’s a convenient sleep solution because it’s totally portable, and you can put the baby down in it safely whether it’s on the living room floor as you catch up on some work or next to you on the (firm) bed as you catch up on some sleep! So many people have said that their babies will sleep when they’re in their arms, but they are tetchy and restless in the crib – the Sleepyhead seems to have solved that problem for quite a few people I know, and the online reviews (check out the ones on Amazon and John Lewis) say much the same thing.

I have to admit that before I had Angelica I honestly couldn’t see what all the fuss was about when it came to the Sleepyhead – I had my Snuzpod bedside crib and couldn’t imagine that I would need anything else. But after a few sleepless nights (two in the hospital and one back home) I decided that I’d put the Sleepyhead into the bedside crib, just to make everything a bit more snug. Now it could have been that the baby would have started to be more settled anyway, but the difference in sleep was almost instant. Four or five hour stretches and no problems with placing her down – it felt much more natural popping her into a little pod-like thing than straight into the cot and I loved that the bumper around her made a comfy rest for my arm so that I could hold her hand and stroke her if she stirred.

I’ve taken the Sleepyhead with me to hotels and used it inside the large cots that they give you – kind of a “bed away from home” – and I also used it for a month at my Mum’s, again putting it inside a large cot, so that I didn’t have to try and transport my Snuzpod in the already jam-packed car. I’ve used the Sleepyhead as a playtime area in the daytime, I’ve used it as a makeshift changing station when I’ve been “on the go” and I’ve plonked it beside me in the bed (pillows and duvet well away) when I’ve been exhausted and have just needed to be able to nap safely with Angelica nearby. (Below you can see the Sleepyhead placed inside the Snuzpod bedside crib with its side down.)

I do get very frustrated with many of the baby things on the market that we are enticed into buying, especially when they appear to be supplementary to the traditional equipment (in this case a simple cot/crib and mattress!); but I can’t ignore the fact that I have used the Sleepyhead non-stop since June. There have been a few days that we have gone without, and Angelica has been absolutely fine – random nights sleeping in the Uppababy Vista (which has been approved for overnight sleeping) and others in larger cots – but we always seem to return to the Sleepyhead and its cocooning charms. Even if she didn’t sleep in it all the time, and we had just used it for travel and for daytime play and naps, it would still have been our most-used baby thing so far.

So, the pros (and I’m gathering comments from other people I know who have used it, too, here):

And cons? I’ve had to think very, very hard about the cons, because I am a total Sleepyhead convert.  To me, they’re not truly cons, but it will depend on your point of view… 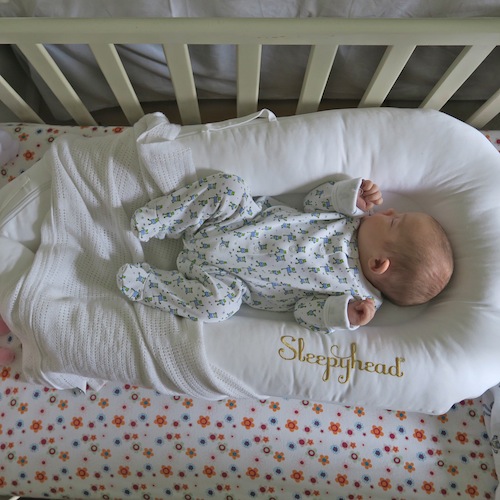 Has anyone else used the Sleepyhead? What did you think? At what baby age did you stop using it? And who has gone on to use the larger one? Comments below, please!

You can find the Sleepyhead on Amazon here – free next-day delivery if you have Prime. The Sleepyhead website is here – I’ve linked to the info page with some tips on safe use and so on.

*UPDATE: we tried a night sans Sleepyhead after I drafted this post. After an hour I came into the bedroom and the baby had rolled backwards into a ball in the corner of the cot and was crying! I was so paranoid about her new rolling/curling-up abilities that I thought I’d never get to sleep for worrying so back into the Sleepyhead she went! I’ll email my questions about sizing and shoulder-squishing to the brand tomorrow and get back to you with some answers.