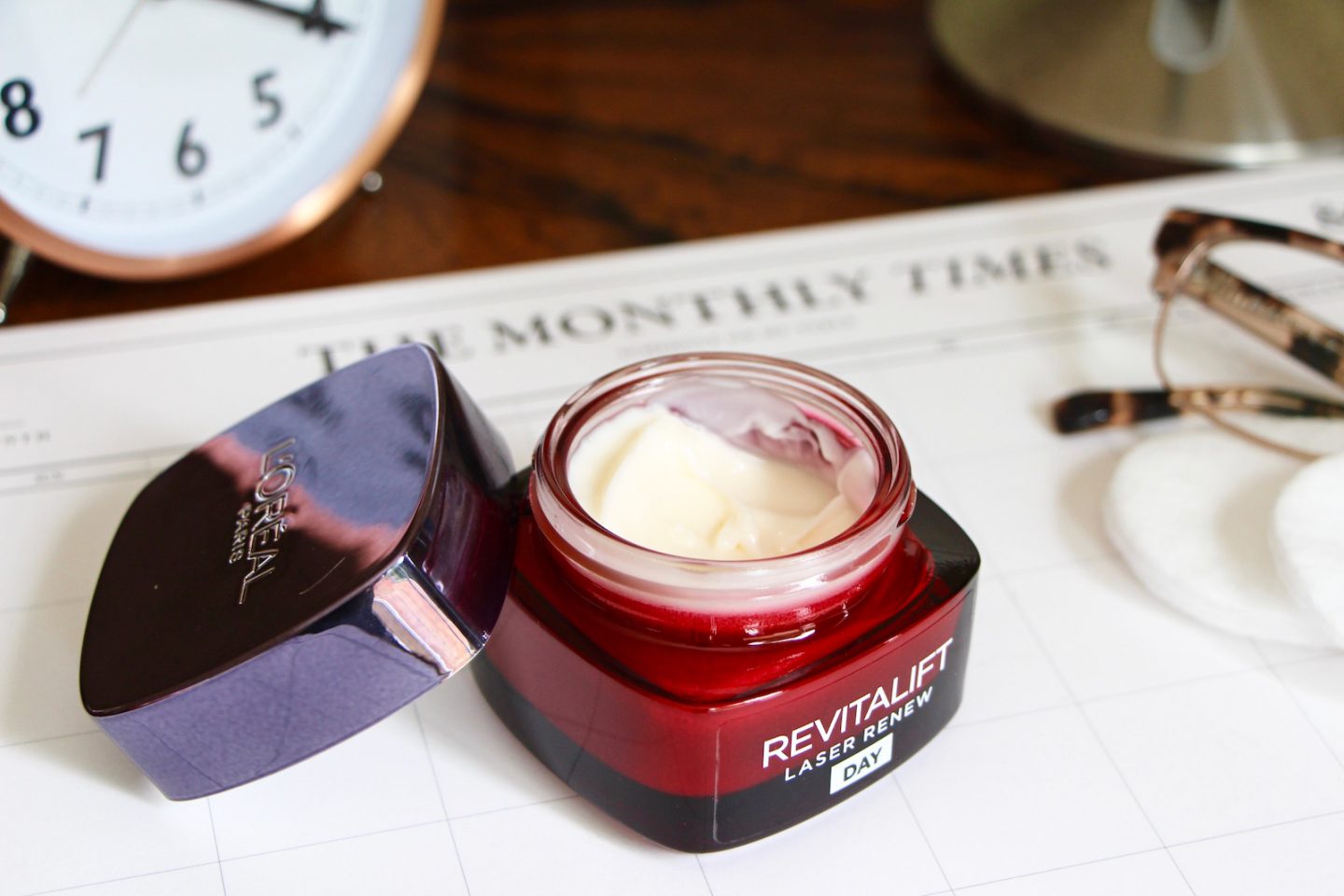 Apparently, 30% of women in the UK believe that their skincare stops working – or stops working as effectively – over time. I can see where this idea comes from – it’s actually very difficult to see results on your own face when you’re glancing at it in the mirror twice a day. Quite often, you notice the initial effects of a serum or cream because they are more dramatic, especially if – for example – your skin was previously very dehydrated and you suddenly start using a good moisturiser. Superficial fine lines might instantly be plumped out, your face might look smoother and more toned. After that first change it’s possible that more subtle – but nevertheless important – changes go unnoticed.

L’Oreal Paris have carried out a big study into the cumulative effects of their anti-aging face cream, Revitalift Laser Renew, and the results are quite fascinating. L’Oreal used an independent test house (the world-renowned Institute d’Expertise Clinique) to test their Revitalift Laser Renew Day cream on 97 women over a 6 month period. The test was completely blind and unbranded, neither the clinicians carrying out the in-depth skin analysis nor the women on the panel knew anything about the cream – they just had simple instructions on how to use it. 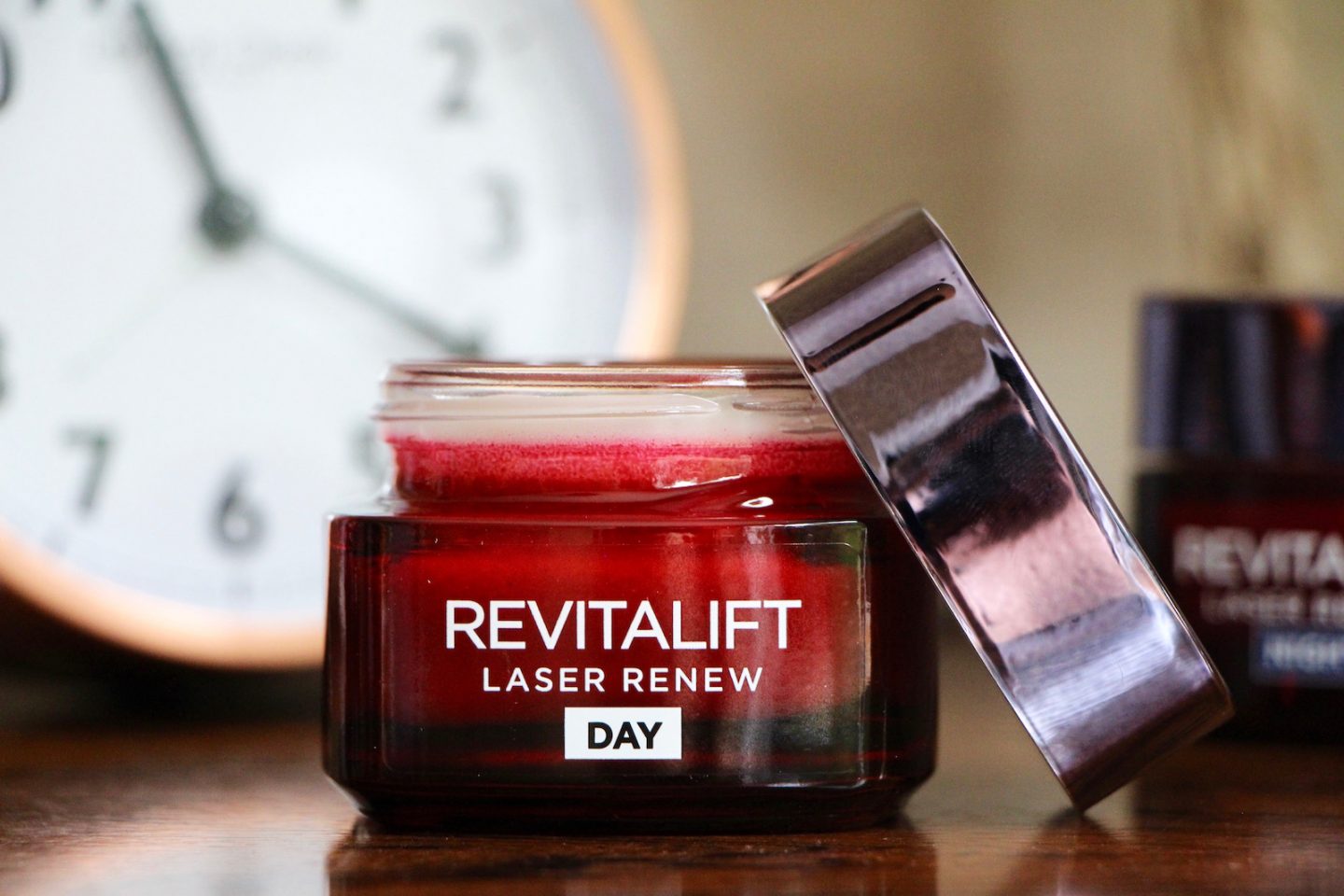 And rather than the effects of the Revitalift Laser Renew cream tapering off after time, the study showed that the formula’s action on wrinkles actually got better, showing an 18% decrease after 6 months versus the beginning of the study. (In case you’re interested in “the science bit”, over 6000 in-depth skin measurements were taken over the 6 month period. They were then scored using the Skin Ageing Atlas, which provides standardised scales against which various signs of ageing can be monitored. Changes in wrinkles, sagging, pigmentation and vascular disorders can all be scored using this scale, making it easier to accurately describe any improvements to the skin. Because I suppose writing “wrinkles were a little bit better after the first month but then lots better after six!” wouldn’t quite cut it in a scientific survey…ha.)

As well as the outstanding clinician results, the panel were asked to self-evaluate their skin and more than 70% of the women noticed an improvement on their wrinkles every month for each time point, with a month-on-month reduction. 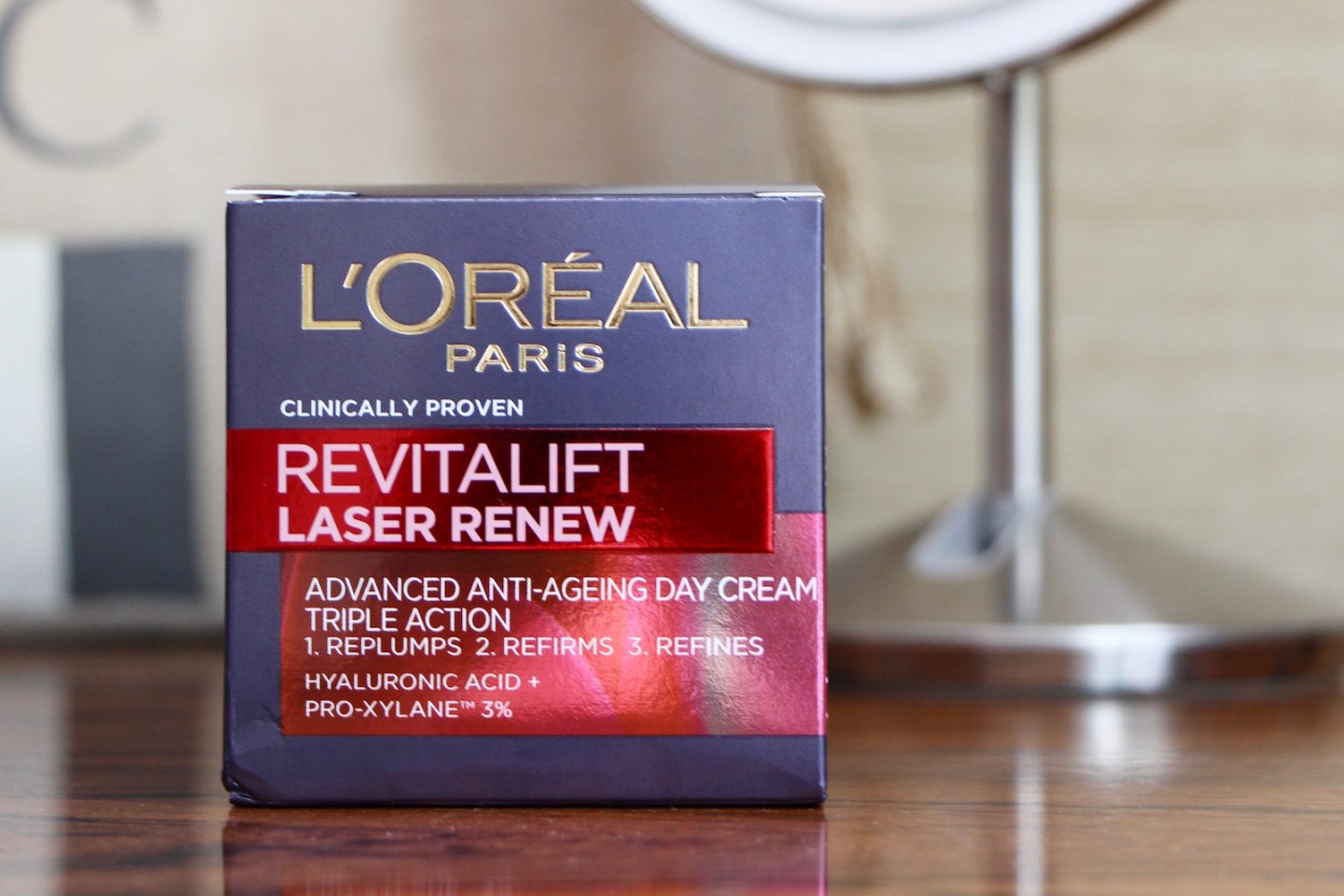 Great news for those who have previously worried that they need to be chopping and changing their face cream every couple of months to keep things zingy in the skincare department. For many, the idea of constantly searching for a different anti-aging cream would be like that age-old cliché of having to do cringeworthy things to keep a relationship exciting. Spicing it up with sexy underwear and “date nights”. Oh God.

I mean, I love experimenting with new skincare, but it’s my job; when I speak to the majority of my friends, they just want something that works, that they can rely on, that doesn’t cost the earth. I have to put a virtual gag on myself, because I find it difficult to comprehend how someone couldn’t be as excited about beauty as I am, but there we go! Some people like fishing. Or darts. Each to their own. 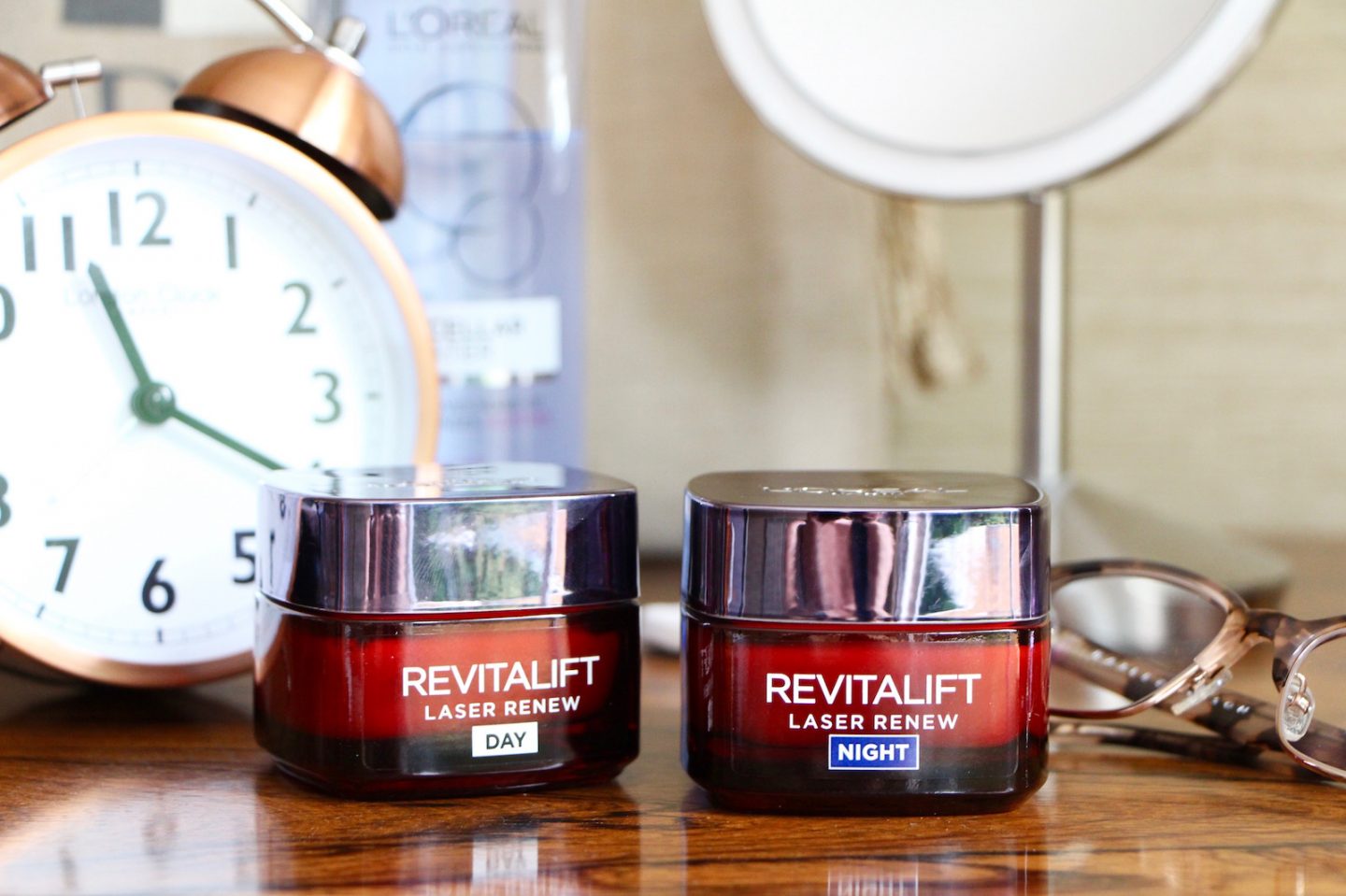 I’ve previously had little mini-raves about the night cream that sits alongside the Revitalift Laser Renew Day; it’s called, perhaps unsurprisingly, Revitalift Laser Renew Night. It’s actually a cream-mask rather than a straightforward cream; you’d be right to wonder at the distinction, because both get left on overnight and are applied in the same way, but it’s slightly more gelatinous than a cream and sort of gels to the skin in a beautiful bouncy layer rather than sinking straight in. It’s non-greasy and I love it – I’ve written about it a few times but it’s here in an Overnight Masks post if you want to read more. 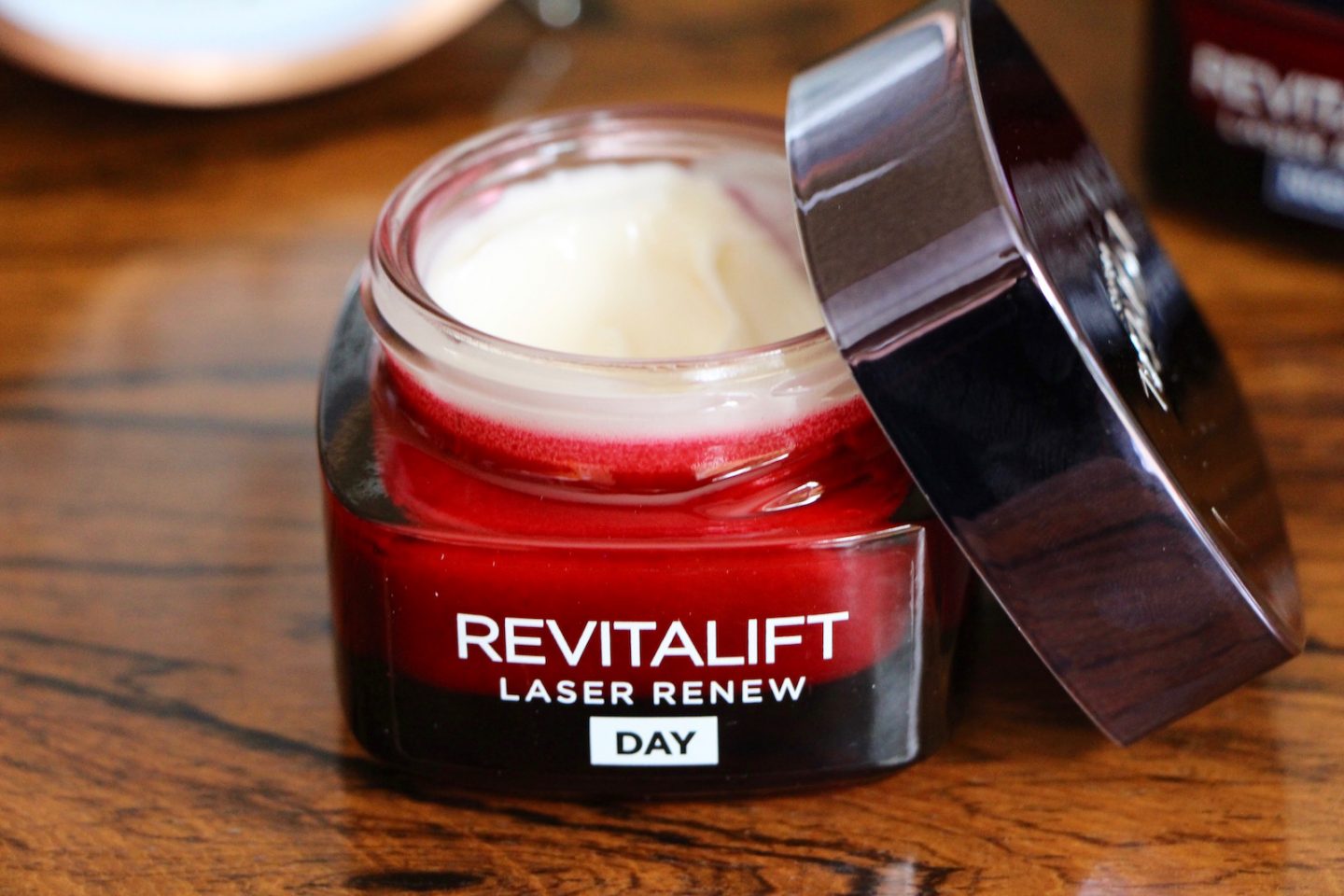 Revitalift Laser Renew Day is more creamy, absorbs more quickly and has absolutely no residue, which makes it more suitable for daytime wear. It features one of L’Oreal’s star anti-aging ingredients, Pro-Xylane, which has been shown to help stimulate collagen production and promote skin regeneration. At the concentration of 3% (which it is in Laser Renew), it has been shown to dramatically aid the way in which the skin retains moisture, helping to smooth wrinkles and give a fuller appearance. The cream sits well beneath makeup or sunscreen without feeling heavy – though if you’re after a lightweight moisturiser with SPF then the one from the same Laser Renew range is brilliant. I actually thought that it was a serum when I first used it (I wrote a post here) because it was so smooth and fresh-feeling.

I digress: you can find the L’Oreal Paris Revitalift Laser Renew Day cream at Amazon here*. It’s currently £15 instead of £22.49!