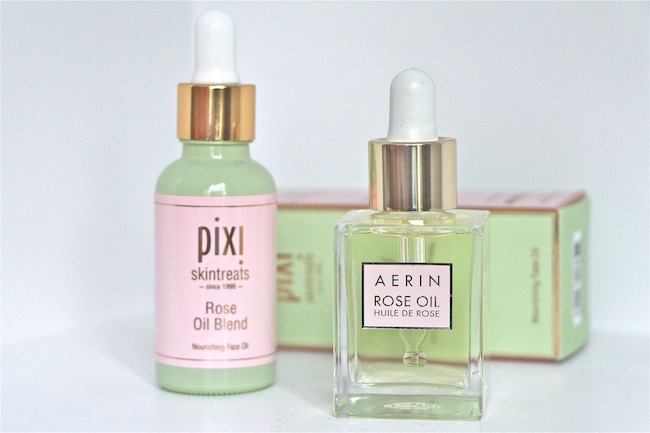 I’m back on the oils – I’ve got skin as parched as the bloody Sahara at the moment. Partly because we invested in a new “intelligent” central heating control which is so “intelligent” that it only knows two temperatures. Freezing and scorchio. And partly, I’m sure, because of hormonal changes after pregnancy. Just a guess.

Earlier this year I wrote about some very simple facial oils – ones without too much embellishment or fuss (you can read about those here) – but recently I’ve been going for oils that are slightly more decadent. Because do you know what? Sometimes I want a bit of embellishment and fuss when it comes to my skincare! I know that the whole fragrance thing is controversial, but at certain times – when I’m knackered and feeling a bit down and really feel as though I need a boost and a pamper – I want my face mask/oil/serum to smell lovely.

Introducing, then, two Rose Oils that I’ve been taking for a quick skincare “whirl around the block”: Aerin Rose Oil and Pixi Skintreats Rose Oil Blend. Both delicious, both a joy to massage in and both with proper overnight glow-giving potential. I’ve been using them after I put my serum on (current serum is L’Oreal Paris Revitalift Filler Serum) and then either leaving it at that or, if I feel as though I need a bit of extra hydration, following with a moisturiser. (At the moment I’m using Clinique’s Antioxidant one quite a lot and my trusty favourite, Time Bomb’s Powerball.)

But as I’ve called this post “Pixi vs Aerin” I suppose I should attempt some kind of comparison rather than copping out and saying “they’re both really nice”! I mean, that would be the actual truth, but it doesn’t really help you make an informed decision. For many, the decision will be made automatically, because the Aerin oil is fully double the price of the Pixi one, but if budget isn’t so much of an issue? Let’s take a look…

Aerin Rose Oil (£50 for 30ml here) is a lightweight skin treat that doesn’t leave your face as greasy as a frying pan. It’s very delicate and the smell is subtle but gorgeous – almost powdery. It feels very luxurious Aerin’s Rose Oil is a blend of (amongst other bits and pieces) rose fruit oil, sunflower seed oil, sweet almond, jojoba and sesame. (I just cribbed that list from Caroline Hirons, click here to read her review!) On the odd occasion that I want an oil to use in the morning (I don’t tend to, for some reason, even though prepping your skin with an oil makes foundation look AMAZING) then this is what I’ve been reaching for. It feels silky and refined. It’s quickish to disappear but leaves the skin feeling very nourished and plumped out.

The Pixi Rose Oil Blend (£26 for 30ml here) has the same rose fruit oil, sweet almond and jojoba right at the top of the ingredients list, but this oil seems slightly more…robust in texture and scent. The oil isn’t quite so light, the smell is less powdery, more geranium-rose than powdery-rose – perhaps because it doesn’t have any added fragrance, whereas the Aerin oil does. But the Pixi oil certainly packs a punch when it comes to getting the skin supple and plumptious – you can get a lovely old massage going with it, whereas the Aerin oil is more lightweight and (dare I say it?) less satisfying to apply. The Pixi is also half the price, which is a bit of a boon, but I have to be completely honest and say that I’ve been going for the Aerin much more than the Pixi, mainly because the smell of the Aerin Rose Oil makes me so very happy. And I know it shouldn’t be about the smell, but…sue me.

You can find the Pixi Rose Oil Blend at Cult Beauty here and Aerin’s Rose Oil is at John Lewis*.