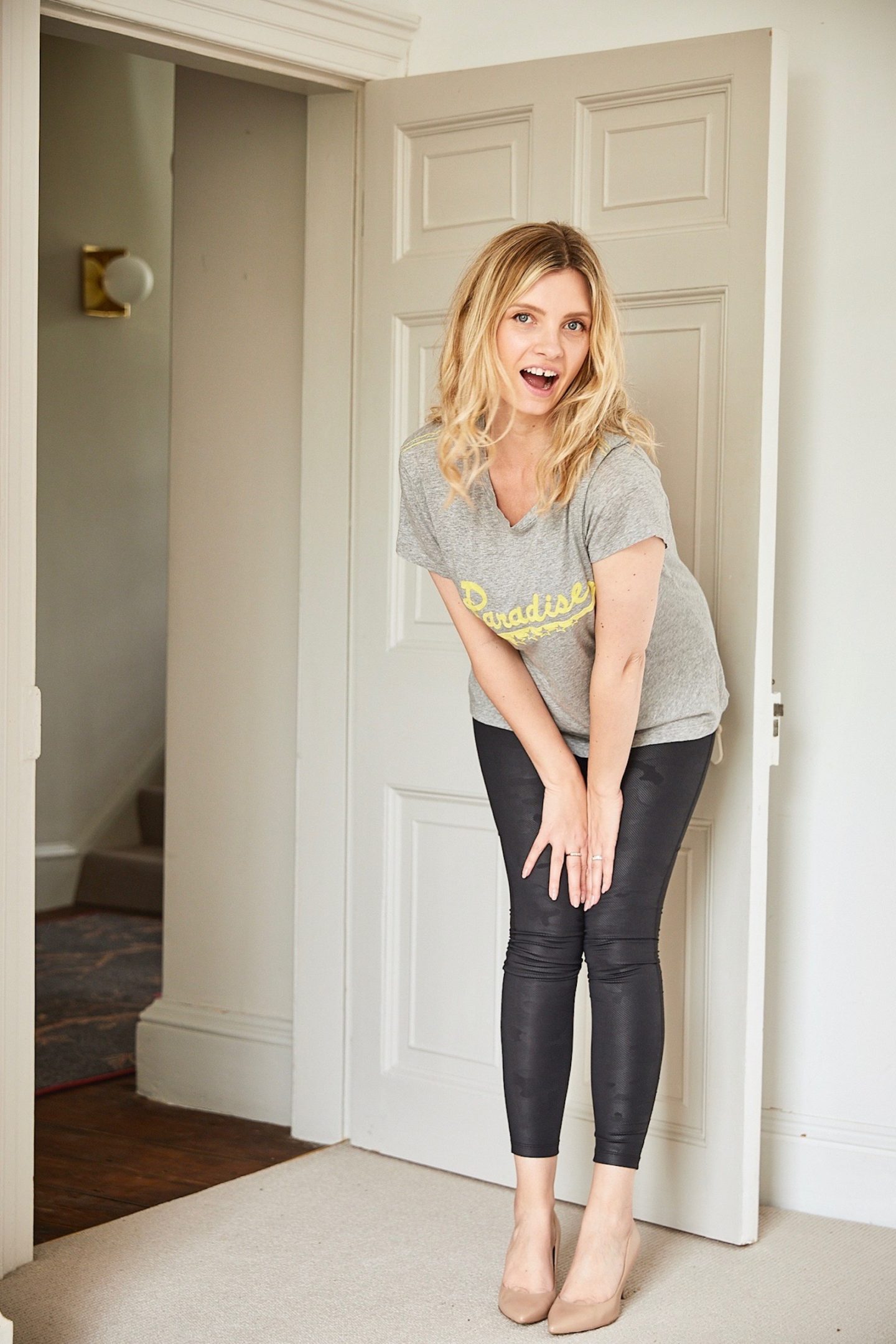 This trend is just an epic no-no for me, right from the start, but now that it is apparently acceptable to wear leggings as proper, meet-the-public outerwear, I have to give it a try. It’s the law.

Why on earth anyone would want to expose their lycra-encased lower half to all and sundry, in normal everyday situations, I have no idea. But it’s happening. All over town (and country) I see people doing everyday things – like filling their cars with petrol and picking up satsumas from the supermarket – wearing leggings as outerwear.

It’s like my worst recurring nightmare; realising that I’m in a public place and that I’m basically naked from the waist down. Because in leggings, you’re pretty close to naked, aren’t you? I mean there’s nowhere to hide when you’re in leggings – or “workout tights” – not only do they cling to every peak and trough, the gusset seam always like to try and do a disappearing act up the nearest handy and willing crevice. 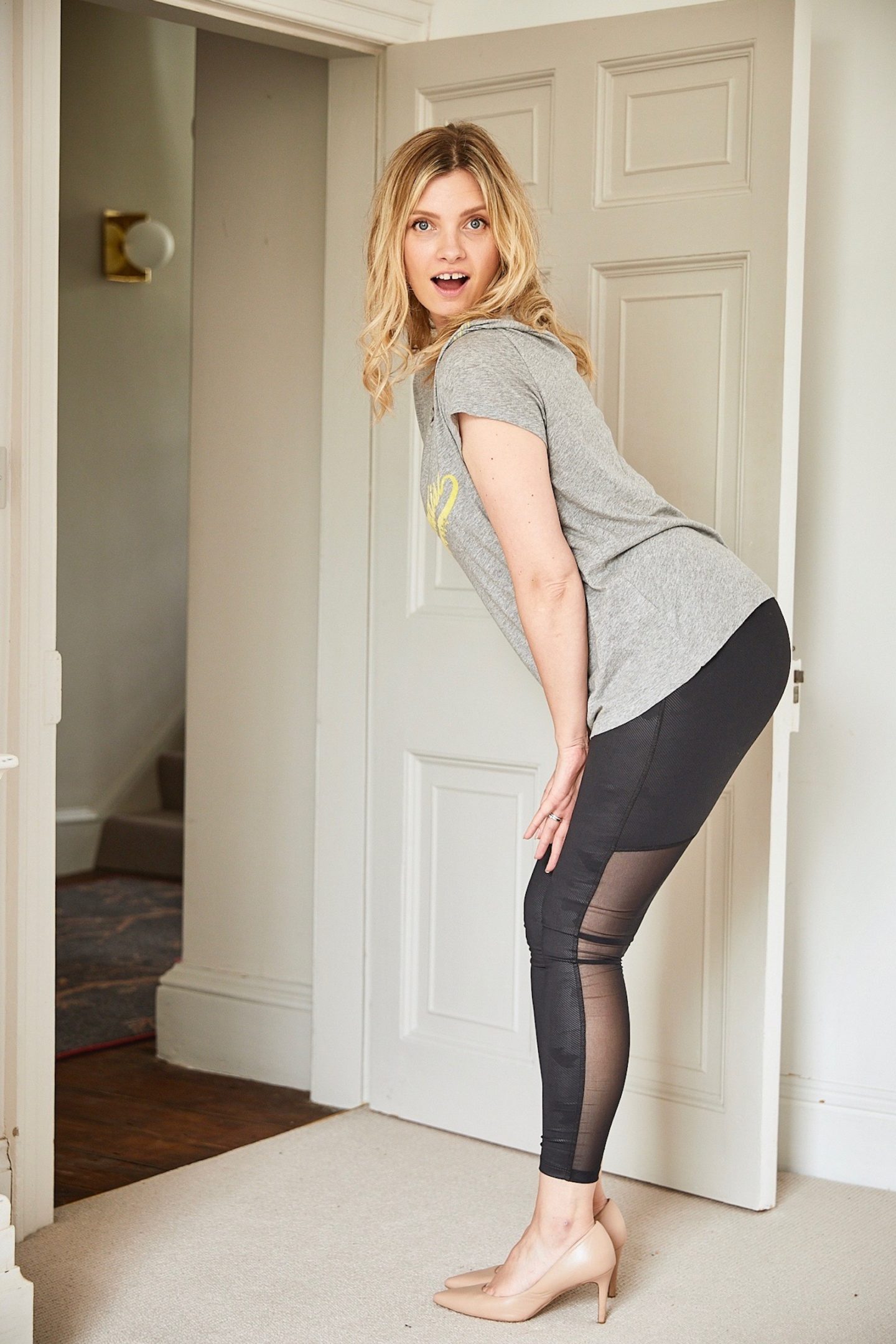 To me, walking about in leggings-as-outwear (and by this I mean with bottom and front bottom regions fully on display, not covered by tunic or long t-shirt) is akin to waking up on a busy street and realising you’re in a swimsuit that’s too short in the body, and that you have great thackets of pube poking out on either side of your gusset and that your erect nipples are badly misaligned. (At pilates the other day I realised that one nipple had become trapped “up high” and the other one had been squashed “down low” so that it looked as though I’d randomly dropped two M&Ms down my top. There must have been a three or four inch height discrepancy.)

Why is there a sudden need to parade our lycra-clad pudendas? Display to the world our exact – to really quite an astounding degree of detail – gynaecological anatomy? It is all beyond me, yet I went out – for research purposes – into the big wide world, wearing just workout leggings on my bottom half, to see what all of the fuss was about. Would the comfiness of the leggings (not as comfy as tracksuit bottoms so already they’re losing) override my innate fear of being, to all intents and purposes, semi-nude in public?

I’ll admit I’m biased on this one. Because I find it bad enough wearing leggings in the gym – one downward dog, or whatever it’s called, and anyone behind you can pretty much ascertain whether you’ve a) had children yet, b) had third degree tears giving birth and c) how well the surgeon did the stitches. Not to be crude (OK, it’s crude) but if you’re wearing leggings – or exercise tights – then the people you’re stretching in front of are probably getting to see, more freely and in better lighting, much more of your genitalia than any of your sexual partners have ever enjoyed.

All that’s between them and your lady bits and all-humans-bit is a thin piece of breathable fabric that – due to its sheen – actually serves to accentuate various contours rather than conceal them from view. As the observer, all you need do is squint and add a few curly bits of hair (or not) and you can just about visualise the real deal. 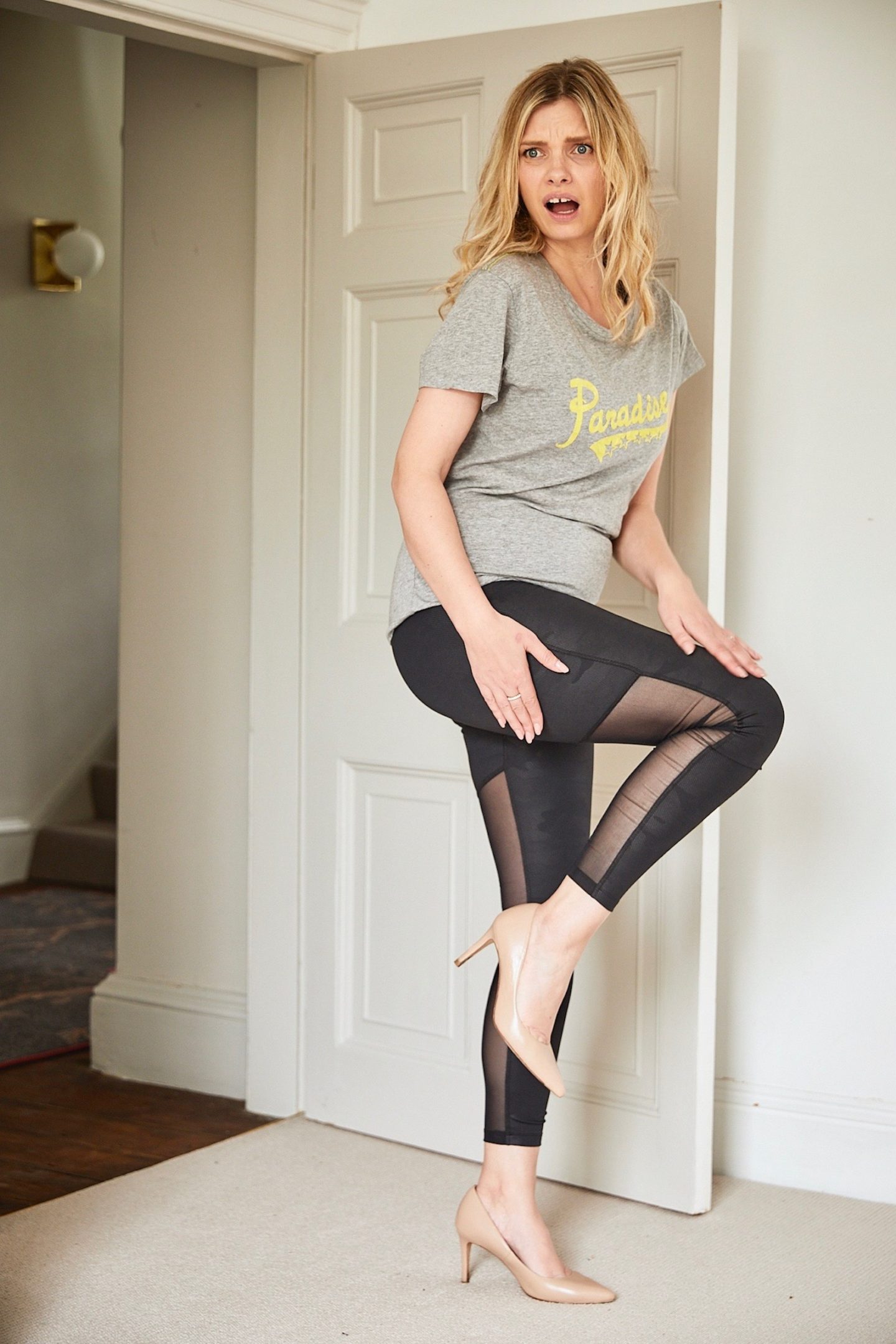 Not that I spend my time doing that, I hasten to add – fellow exercisers of Somerset, you are safe with me! – it’s just that I’ve been giving this a lot of thought. Perhaps I’m becoming more prudish with age, maybe I need to get with the times and praise the vagina (VULVA!) and be #grateful that we are in a place and era where we can be free with our bodies and worship them for all of the great things they have done for us, etc etc, add more Insta-clichés at will, or maybe I just need to grow up. But that’s never going to happen…

Now look, I’m not a total tool – I realise that showcasing the old creasey/wrinkly parts when you’re in the exercise zone is part and parcel of the experience. It’s like swimming pools and beaches, you’re all in the same boat and there’s a general acceptance of attire and the knowledge that you’re going to probably see more than a few man sausages tightly ensconced in budgie smugglers…

…sometimes really close to your face, because you pull yourself out of the pool right into the lap of an older gentleman who’s sitting on the edge, about to get in. (The real reason I haven’t gone swimming in a public pool for about ten years.)

Where was I? Totally distracted by that particular memory. Nothing like a chlorine-scented packet in your face. I think I also might have briefly laid my head in his lap too, because I had to do a weird about-turn and I’m not particularly great at swimming or manoeuvring myself in water. I may have panicked. It’s possible that I almost drowned trying to get away at speed and swallowing vast volumes of pool water.

Anyway, yes I do realise that certain scenarios (exercise, cyclists’ nights out, Club 18-30 parties) involve the mandatory sheathing of body parts in elastane-rich fabrics, it’s the public wearing of these items, the voluntary donning of leggings in non-exercise-related pursuits, that confuses me.

So leggings as outwear then – how did I get on with exposing my tightly sheathed flesh mounds to the public? I have to be honest here: I only just made it through the car park at Babington House, which is where I do my gym classes. (Lucky me, I know, but it’s my nearest anything, including place to eat, drinking hole, swimming pool.) (Not that I’m trying to justify going to a chi-chi luxury resort for my pilates class, but I don’t want to sound as though I’m name-dropping. I just feel the need to mention that it’s Babington House because there’s a certain risk factor with it that you wouldn’t get with most other car parks. The chance that the Beckhams might be sauntering through the wooded grounds, for example, or that a mega-famous rockstar (can’t name names, apparently it’s all sacred and secret – I just guessed at the Beckhams so that’s allowed) might be parking his battered old Landrover.

Anyway, I crossed the car park feeling for all the world like someone who had forgotten to put trousers on, which in effect, I had, and VERY aware that I was showing my entire arse like a randy baboon. And I was also very aware of the people getting in and out of their vehicles all around me. I don’t know which was worse; the mother shielding the baby’s eyes with a gasp of horror as I scuttled by – “it’s OK Jeremiah, the lady is unwell!” – or the rather dishy man in the Porsche who quite literally hurled himself back into his car from his half-ejected position lest we cross paths.

I was like a giant tadpole in my shiny black leggings; my bottom being the bulk of the ‘pole and my legs the tail. Inexplicably, the designer of said leggings (they’re not the ones pictured, by the way) had decided to put three faux-zips onto the hip area – two at the front, one on the left cheek. Why have zipped pockets anyway, on fitness leggings – what are you going to keep in there, your aura? the key to the meaning of life? – but more to the point, why have zipped pockets that don’t actually function as pockets? Therefore are just zips sewn into the fabric? Utterly bizarre. 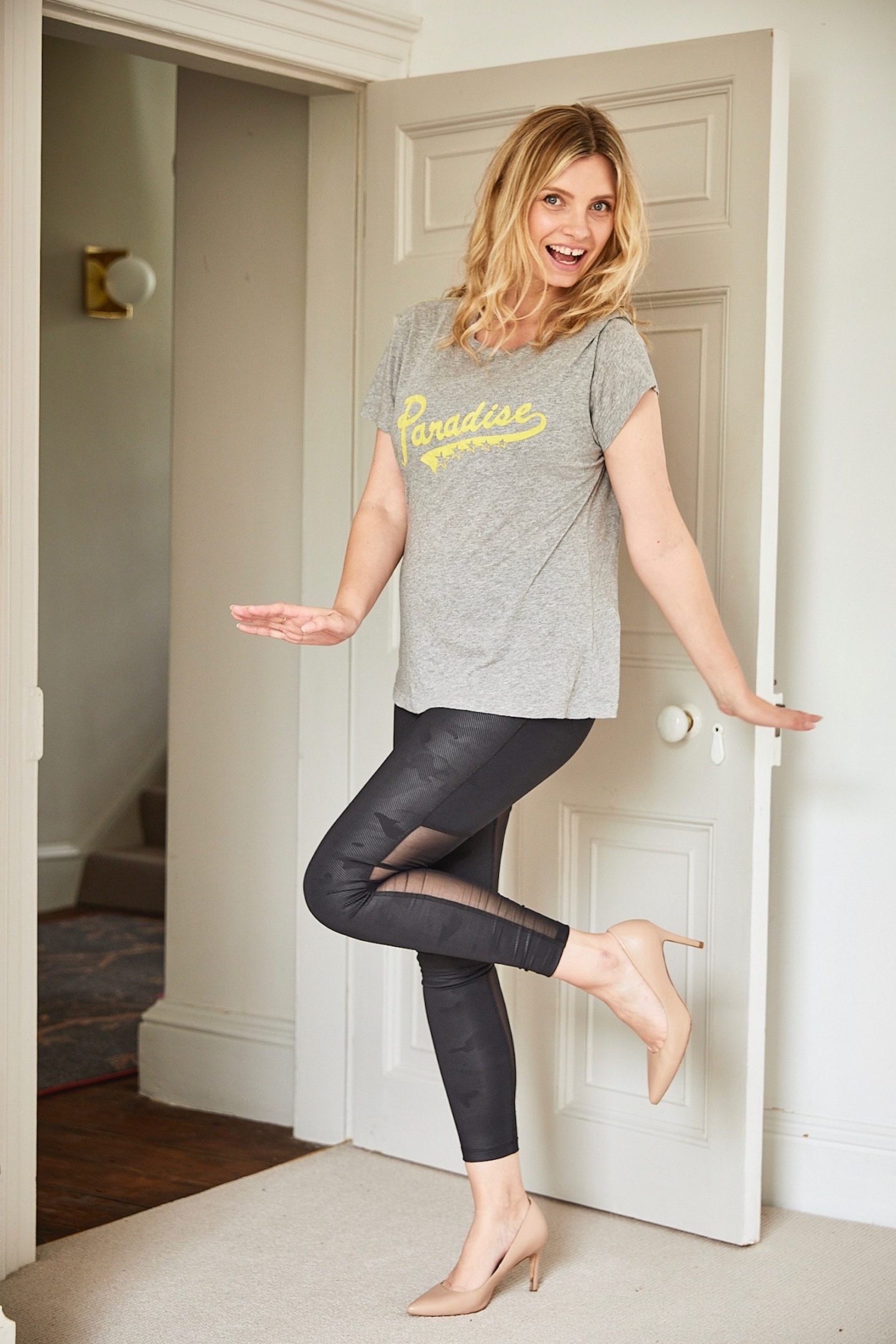 The zips just served to emphasise how unsuitable the leggings were as outerwear – there was no front pocket for my small change, no back pocket for temporary iPhone storage. I could feel an actual breeze in my private places as I hurried along, my thighs made a strange shusshing sound as the slinky fabric chaffed back and forth and – weirdly – in all of my embarrassed panic I forgot how to walk in a properly upright position. Knowing that my bottom was on full show, I tried to pull it inwards, but then it felt as though I was walking too straight, like John Cleese, so I went the other way but overcompensated, hunching forwards and possibly looking like someone who had lost all control of their faculties.

So my verdict on this trend is: I wouldn’t. Leggings, for me, are for the indoors, or they are for scenarios when everyone else is wearing leggings. Legging conventions, gyms, legging fetish groups. In most other places, it’s just too much information. Maybe I’m being old and fuddy duddy about this, but I just don’t want to see other people’s vulvas when I’m trying to get to the last tin of Kidney Beans on the bottom shelf at Sainsbury’s.

Actually maybe it is an age thing. I’m pretty sure I wouldn’t have even thought about leggings fifteen years ago – and I once wore a leotard over tights (with thigh high S&M boots) to a respectable fancy dress party (I was Barbarella) so I can’t really talk. Nevertheless: discuss. Leggings as trousers – with bottom area fully exposed – yes or no? Acceptable or a trend gone bad?