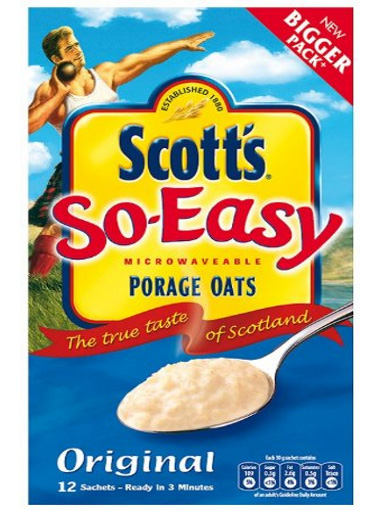 I have recently made a quite frankly lifechanging discovery. Porridge Oats in a sachet.

Porridge has been one of my breakfasts ‘of choice’ for the past few years, but I had always made it in a saucepan, standing stirring the milk and oats for what seemed like an eternity before it was finally ready. After eating my porridge (which, incidentally, I used to weigh on the scales to make sure I got the right oat/milk ratio before I began heating!) I would have to battle with washing up the pan which would always have a layer of porridge glued to the bottom.

The sachets are heaven. Pre-weighed, and I just pour them into a bowl and top with milk (which I still measure in a measuring jug – saddo!) and stick the whole lot in the microwave! Three minutes and it’s all done. Only a bowl and spoon to wash up and no weighing on the weighing scales! I do add rather a lot of honey – but let’s face it, porridge would be pretty dull on its own!

Porridge is a brilliant breakfast – it fills you up for ages and stops you snacking through the morning, I find. I actually never snack in the morning anyway – even if for some reason I haven’t been able to have breakfast, which is rare, I just plough on til lunch. I never feel hungry when I’ve had my porridge. It’s also supposed to be good for your cholesterol, or something, but I just like it because it’s healthy and it fills you up!

The only problem with these sachets, if I may be so bold to point this out, is that each one only holds 30g of oats. That’s 109 kCal, which is the same as an apple or banana. 109 kCal does not a breakfast make! Milk adds another 100 or so, and the honey (what with my honey appetite!) probably adds another 150, but still – I think you need a little extra in each. It’s OK for kids but not substantial enough for an adult. Two sachets would be a bit too much – somewhere in between would be just right, said baby bear. I have a little extra something with mine usually – a piece of fruit or a yoghurt or whatever is on hand to munch on!

Scott’s So-Easy Porridge Oats are £2.19 for twelve sachets from your local supermarket – I highly recommend for a quick and healthy start to the day!