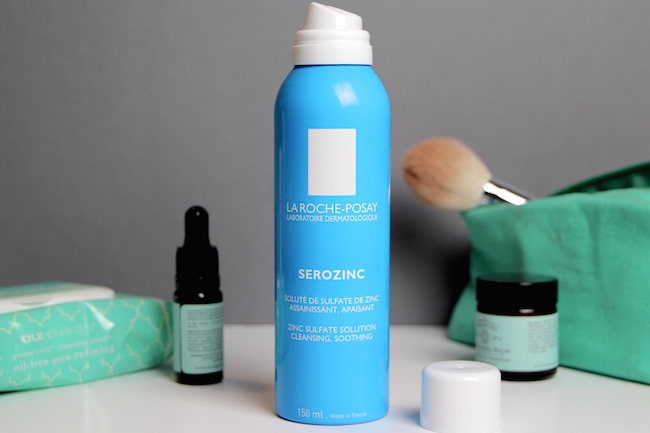 Just a quickie, today, because I have recently discovered the television series Game of Thrones and the sofa beckons! Goodness me is Game of Thrones saucy – how has it taken me so long to get around to watching it? I thought that it was going to be a bit like Lord of the Rings which, quite frankly, bored me to tears, but G-o-T is an action-packed sex-filled gore-fest!

A while back I mentioned a nifty little cleansing spray from La Roche-Posay called “Serozinc”. I discovered Serozinc through Caroline Hirons (along with a few billion other people, I’d imagine!) and it immediately became one of my “French Pharmacie” must-haves. Its labelling says that it’s a “cleansing, soothing zinc-sulfate solution”, the blurb says that it’s a zinc-sulfate enriched “toning mist”, I say that it’s just a bloody brilliant little spray for just about everything. I have used it as a gentle kind of toner, after cleansing and before serum, I have used it as a “quick sweep cleanse” when I’ve been travelling and forgotten my creams and balms, and I’ve used it as a refreshing mist throughout the day in hot weather or when I’ve been sat at my desk.

Zinc has long been touted about as having a positive effect on breakout-prone skin; it also apparently has something of a soothing quality and is good as an anti-irritant. Great for those days when skin is just sore, bumpy and having a minor meltdown. A quick spritz of Serozinc after cleansing can’t be a bad thing if you’re after an extra bit of anti-spot security; it takes about three seconds to spray it on and then all you have to do is just pat in and leave. If I’m away from home and haven’t taken a decent cleanser with me then I have been known to use a mist of Serozinc and then a wipe over with some damp cotton wool. I can’t say that its cleansing powers are life-changing, but as a final sweep-over you could do a lot worse! (Sidenote: I often forget to take cleanser away with me. I have no idea why, seeing as though it’s my most important step. But I have many emergency cleanse measures that I resort to, including using face oil (excellent), moisturiser (very good) and even, once, some lip balm melted down in my palms. (Don’t even ask how that went.))

So, Serozinc: definitely a nice one to have in your stash, especially if you’re fond of facial mists and spritzes. If you’re usually just using a can of scented water then do have a change and give this a go; it’s not just for acne-prone or oily skin, it’s comforting, soothing and refreshing and not at all drying.

Once a treasure to be found buried deep in the hallowed aisles of the French pharmacie, Serozinc is now available in the UK. It’s £8.50 at Escentual.com here – at time of writing it was on offer for £7.20.