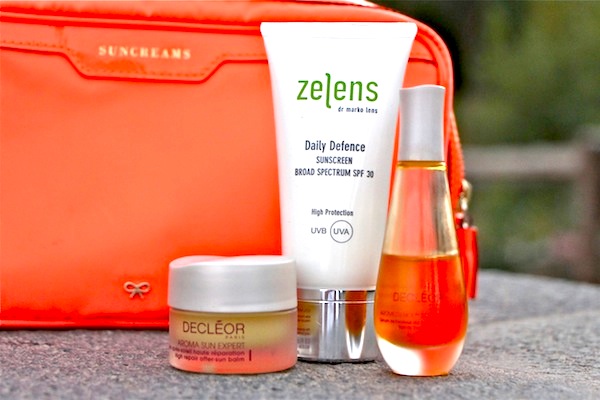 This skincare routine worked so well for my skin when I was away in Greece. A little something pre-SPF (the Decleor Tan Activator Serum, in the little glass bottle) and then something balmy and soothing for afterwards, when all of the sunscreen and sand and salty sea-water had been cleansed away. That would be the Decleor High Repair After Sun Balm, in the little pot on the left. Looks teeny tiny, and so does the bottle, but a little of both goes far – you wouldn’t want to be slathering too much on, unless you want to have a face as oily as a freshly basted Turkey. The SPF is, as you can see, the Daily Defence from Zelens which you can read more about here, should the urge take you.

I feel as though I’ve said this about four thousand times this year, but I’ll say it again: I don’t tend to show my face, these days, in extremely harsh sunshine. I keep under a wide-brimmed hat and, if possible, I sit in the shade. I used to love lying out for hours on end, sizzling away on my sunlounger and turning myself at regular intervals, much like a rotisserie chicken, but the evidence against grilling oneself is now too strong to ignore. That if you fry your skin, it will not thank you for it. There’s the obvious skin cancer risk and there’s also the fact that you’ll get wrinkles faster and you may, by the time you turn forty-five, have a face that is indistinguishable from an old leather boot. (I plucked the number forty-five out of thin air, just because it had the right rhythm – there’s no reason why that would be the magical “skin turns to crap” number. If you relentlessly burnish your skin then it might look like leather by the time you’re thirty. Equally, you may be blessed and have amazing skin in your sixties, even sans-SPF. My Mum has barely a line and has only worn sunscreen about three times, ever, but personally I’m not prepared to take the risk!) 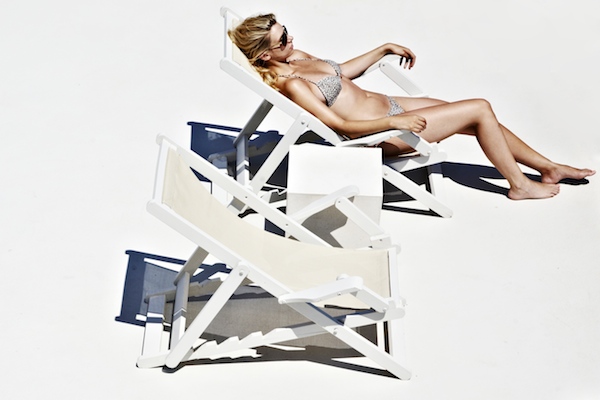 Look, I’m not a No Sun Fanatic; I do lie out in it, I do sit on the beach and go a rather bronzey shade, and there’s no lovelier feeling that soaking up some rays as the waves lap against the shore. I just think that I’m a lot more careful these days; I use SPF religiously when I’m on holiday, I reapply every few hours and I never, EVER burn.

I’ve digressed, as usual, because I really wanted to talk about the Decleor skincare products; but I suppose that what I am trying to explain, in a very roundabout way, is that although I do tend to keep my face out of the strongest sun, it’s not completely hidden all of the time. The fact that it’s now, post-hols, a whole foundation shade darker means that the hours in the sea, lying on my back, and the times that I basked – hatless – in the late afternoon sun have left me slightly more bronzed than I was. And I knew that this would be the case – I was on holiday, for goodness’ sake, I wasn’t going to hide indoors! – which was why I came ready prepared with the Tan Activator Serum and the High Repair After Sun Balm. One for helping to boost the skin’s natural defences and one for helping it to repair. The serum (which I would rather call an oil, because that’s what it is) contains argan oil, which is rich in antioxidants to help the skin protect against UV damage and also has carrot oil, which apparently helps the skin to develop a gorgeous hue. The balm, which melts between your fingertips to form a silky oil, contains argan, jojoba, avocado and shea to nourish the skin as well as something called bisabolol (me neither) and extract of vanilla to soothe hot skin. And I don’t know about separately, but used together on a daily basis – serum before sun, balm after – they left my skin so, so plump and gorgeous. No redness, not ever (probably more due to the excellent coverage in the Zelens SPF, to be fair, but worth noting) and not a single blemish or little whitehead pustule, which I’d normally get at some point if I was bunging on loads of oils. It was, I have to say, something of a Dream Team, this combo. Even Mr AMR was very impressed, though he’s the kind of person that turns the colour of mahogany as soon as he even so much blinks at the sun, so I often think that such products are wasted on him…

You can find the Tan Activator Serum at LookFantastic here and the After Sun Balm here – if you want to just go in for some Vitamin E action, then you could do worse than take a look at the Neal’s Yard Remedies Argan Oil. It’s simple but effective and isn’t too pricey.