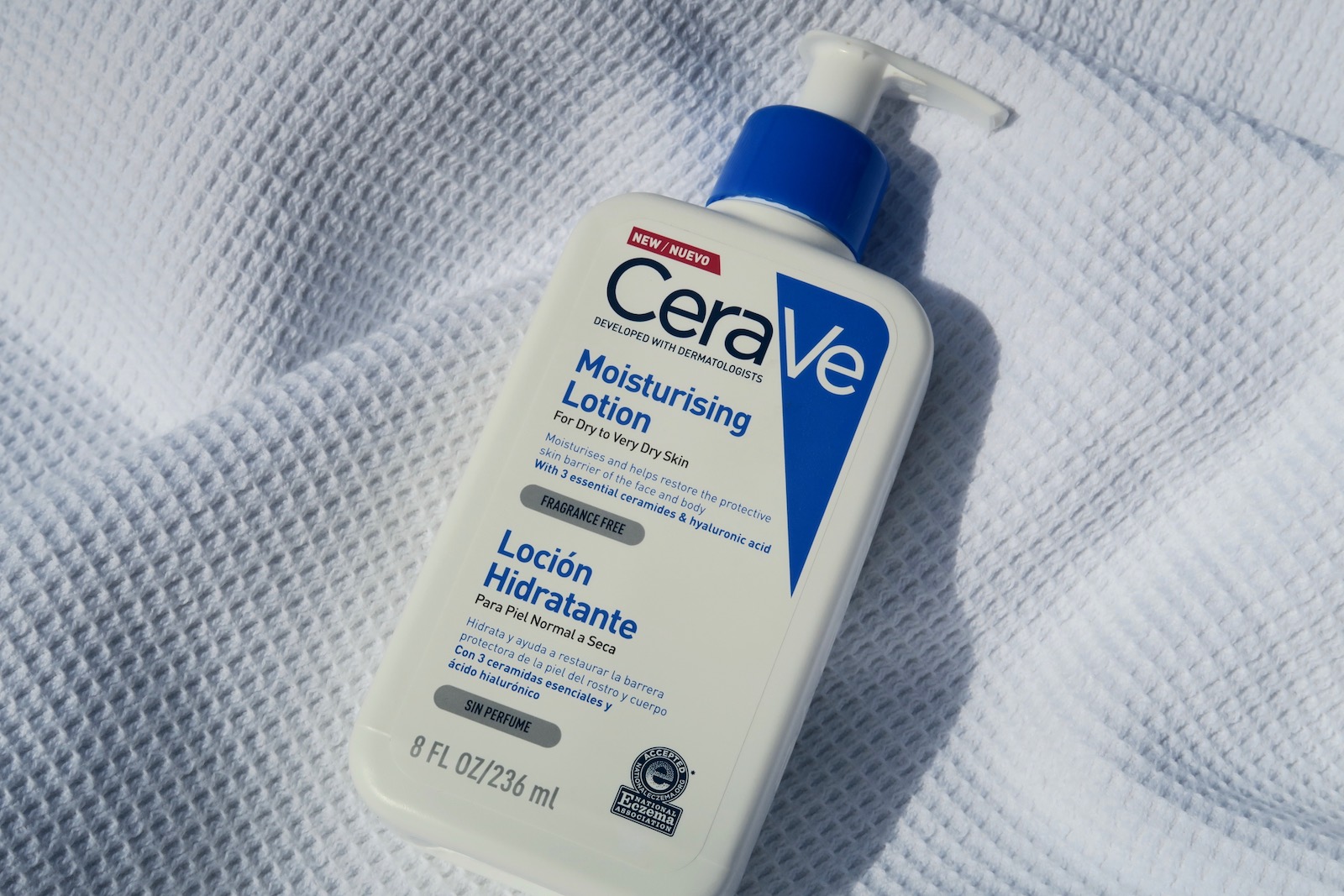 Here’s a very effective and affordable face treat for you, if you’re after something light, hydrating and sensibly formulated. Suitable for sensitive, itchy or very dry skin (as well as skin with no particular complaints), CeraVe’s Moisturising Lotion comes in a whopping great big pump-action bottle (236ml) which, I’ll admit, does make it look more like a body lotion than a face moisturiser, but I can tell you that this is as brilliant for thirsty faces as it is for scaly shins. (Actually, there’s a much richer cream version that works better on scaly shins, but more of that later.)

CeraVe is a hugely popular American skincare brand, widely recommended by dermatologists and frequently topping the bestselling beauty charts. Their formulations contain a blend of lipids and ceramides to repair and strengthen the skin’s barrier, which I imagine is what makes the range of creams and lotions so popular with people who have very dry or compromised skin – in the US CeraVe has more products approved by the National Eczema Association than any other brand.

But enough reading from the “About” section on their website (ha!) and onwards to my testing results; I had been using this on Angelica’s eczema around her elbow and knee creases. It wasn’t actually the CeraVe cream that was prescribed (Boots didn’t have the right one and then I had to go back in a week and then I didn’t and then I lost the bit of paper), but I had the lotion in my stash already and it made a nice – less greasy – alternative to the Epaderm ointment, which felt like smearing on lard. Her proper, active treatment cream (Elidel, in case you’re wondering) is nice and lightweight but it’s also more of a maintenance cream, so I use it when she gets flare-ups. The rest of the time it’s all about keeping the skin moisturised, so I use a variety of things (and I’m always open to suggestions!) but the lardy Epaderm is a pain to put on and Angelica hates it. (“Not the greasy cream Mummy!”) 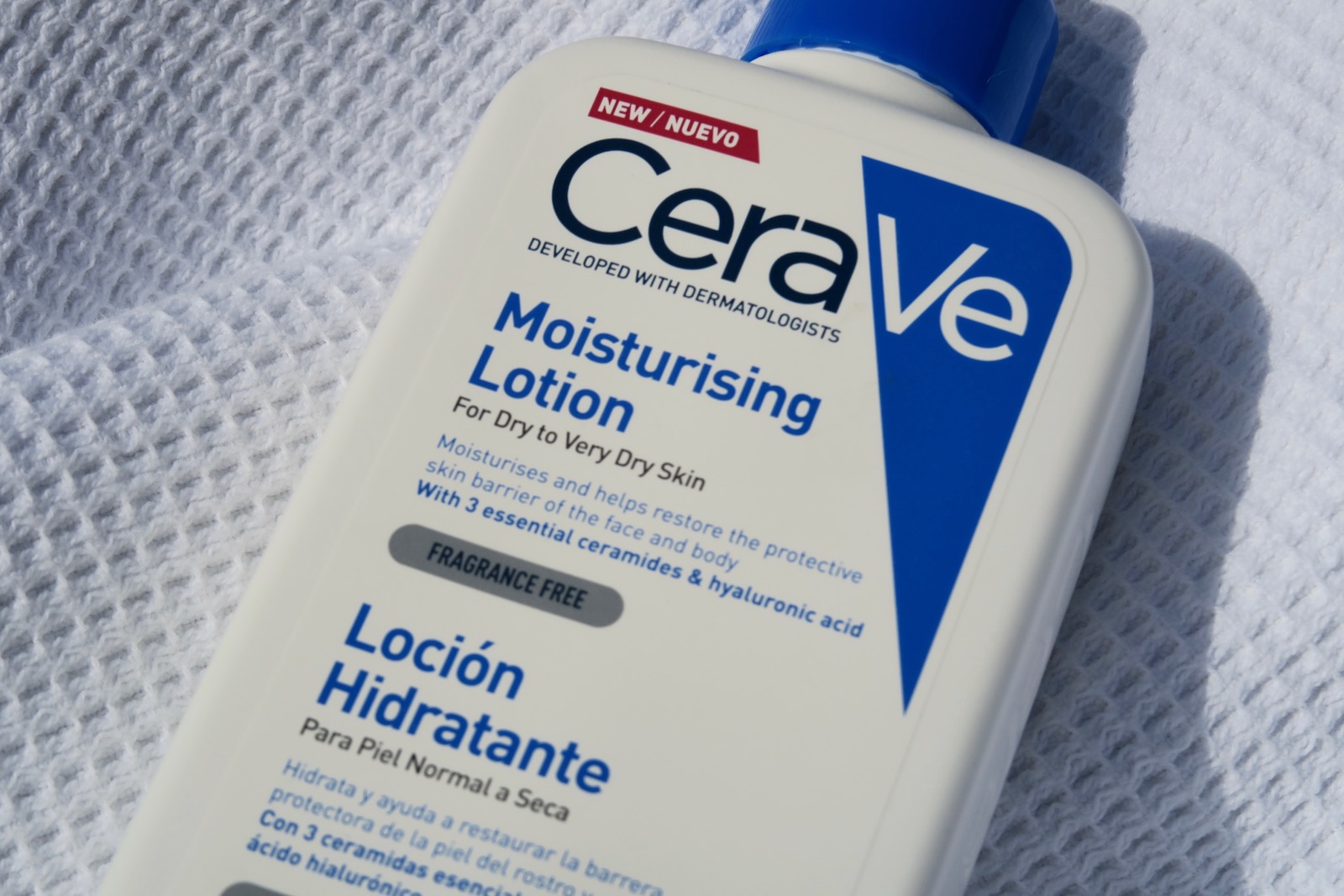 Anyway, to cut a long story short, I took the CeraVe Moisturising Lotion on holiday with us for her skin but then also ended up using it for my face because I’d only bought a tiny tube of face cream with me, for some insane reason, and needed something to follow my retinol treatment with. I thought at first that the Moisturising Lotion wouldn’t cut it, in terms of being rich enough, but despite its light, fresh-feeling texture, it actually really packs a punch. If you have incredibly dry, rough skin and want a heavy cream with a comforting sort of residue then this is not for you (the cream from the same range is, that’s here*) but if you want moisture without the grease then it’s wonderful.

A fragrance-free, non-fussy formulation, it sits brilliantly beneath makeup, feels immensely soothing after you’ve been in the sun and is a good neutral sort of choice if you want something simple to follow your acid toning pads or retinol cream or whatever active thing you’ve applied before bedtime.

Yes, it feels sort of weird using a face cream that looks and feels like a body lotion, but if this was repackaged (and many times the price) then it would be not dissimilar in experience to using something like Toleriane Fluid from La Roche-Posay (here*), though that has far fewer ingredients and is more soothing, if that’s what you’re after…

So, a gargantuan amount of lightweight face cream (sounds more appealing than face lotion, don’t you think?) for under a tenner. Did I mention that this is only nine pounds? It goes straight onto my (constantly updated) list of best budget buys. Which I haven’t published for a while, so I will try and get onto that…

In the meanwhile, you can find CeraVe Moisturising Lotion at Boots.com here* – the cleanser, here* is also really rather great. Non-stripping, easy to rinse off, does a thorough job.