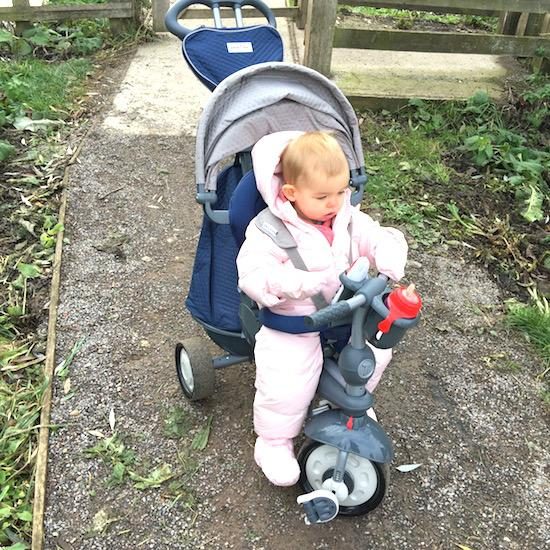 Isn’t the word “tricycle” great? Partly it makes me think of that scene from The Shining, where the kid’s pedalling his little trike up and down the deserted hotel corridor, and also it reminds me of that vile puppet (is he called Jigsaw?) in the horror movie Saw, but mostly it conjures up images of Victorian children wearing striped romper suits, tricycle-ing their way up and down some sunny seafront promenade.

Anyway… SmarTrike’s Infinity 5 in 1 Tricycle arrived for us to have a go on and, banishing all Jigsaw-horror-puppet thoughts from my head (“let’s play a game!”), we immediately set about putting the trike through its paces. Actually, that’s a lie: I had a cup of peppermint tea, my husband assembled the trike (took mere minutes) and then we had to wait for the drizzle to stop before we could go out.

What makes a tricycle a “5 in 1” tricycle? I’ll tell you. It’s all quite clever, actually – more of a “five phase pushchair with the ability to turn into a trike” than just a toy with pedals. It’s suitable for babies from 10 months – the younger the baby, the more the trike is like a sort of interactive buggy, with the first phase having a reclining seat, full harness and additional safety bar protection and the second having an upright seat position. In these first tricycle stages, the baby doesn’t use the pedals – there’s a footrest and, for the lucky parent, a steering handle with five different handle heights so that you can comfortably push the trike along.

Stage 3 of the Tricycle Transformations (18 months +) sees the canopy removed. Is this really a stage? Should it count towards the “5 in 1”? Tenuous, I think, but I’ll let it go. Stage 4, for toddlers aged 2 and up, takes away the footrest and brings the pedals into action (though the parent handle is still attached) and Stage 5, possibly the most exciting, sees the Infinity 5 in 1 undergo its biggest metamorphosis of all: from parent-powered pedal-pushchair to standalone chaos cruiser. No more parent handle, no sissy footrest, just pure toddler freedom with on-board plastic mobile telephone and a cup holder for essential mid-journey refreshments. 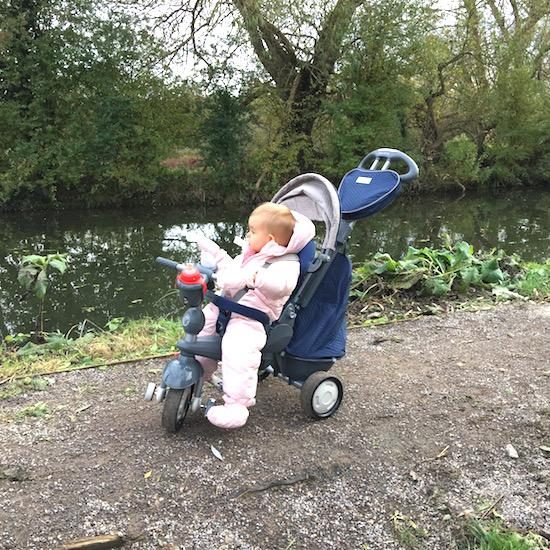 With the drizzle stopped, we went out, SmarTrike set to phase 2. It felt a bit more exciting and “great outdoorsy” to leave the sun canopy closed, so that’s what we did. But it’s good to have the option – along with the comfy, padded seat, the proper safety harness and the on-board storage and spacious zip-close bag that fixes to the back of the parent handle, the canopy just makes the trike even more like a pushchair. Add to this the easy, smooth handling and the good, unbumpy ride and the trike becomes a feasible alternative to a buggy if you want to take the baby/toddler on a walk but let them be more involved in the journey.

On its inaugural trip, we decided to take the SmarTrike Infinity off-roading – we’re nice like that. Test things to the limit, or don’t test them at all! Stony pathways, sodden fields – the trike managed really well. At one point, when I rolled it across a series of metal grids, I thought that I may have pushed the little trike a bit too far but no – there it was, all three wheels still attached, when we reached the other side. Bravo. 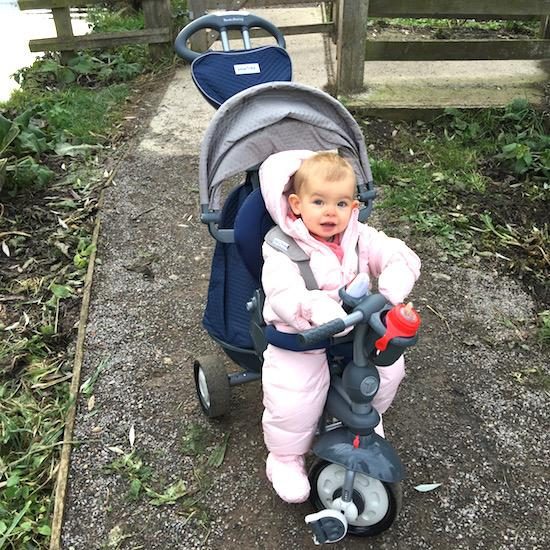 So not strictly a tricycle then. A tricy-stroller. A stroll-ycle. You could absolutely wheel this up to the shops, around the park and so on, instead of taking a buggy. Whereas most wheeled toys stay in the garden because they’re such a pain in the arse to take into the outside world, this one is an actual joy. And it was an instant hit with Angelica, who wouldn’t get off it at the end of our first test session, even though she’d already been on it for an hour and a half. She seemed very proud of herself, as though she was actively involved in the whole “going for a walk” process rather than merely a passenger. Perfect, then, for toddlers/babies who are at that age where they no longer nap on walks and get a bit bored and feisty if stuck in the pushchair for too long.

The Infinity comes in blue or purple (I think the blue is very smart) and costs £129.99 from Smyth’s Toys here. An excellent Christmas present, if you’re struggling for ideas and looking for something on the bigger side – though make sure you read my Gift Guide here if you’re after lots of little ideas!

*my SmarTrike was kindly sent for us to test but with no obligation to review.