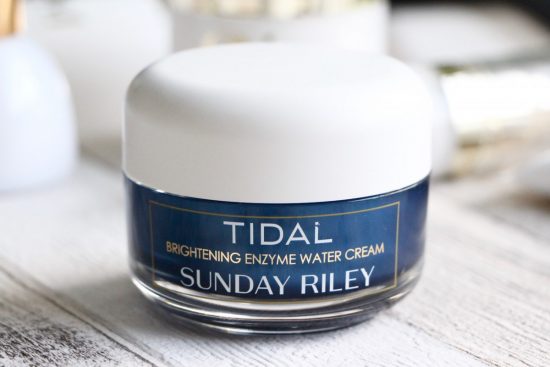 I’ve very quickly fallen for Sunday Riley’s Tidal Cream. It is, to summarise prematurely, a fresh-feeling moisturiser with superb brightening effects that seems to be highly effective without feeling as though it’s going to burn my entire face off. So many products are a no-no for me during pregnancy, especially acid exfoliants, that I approach anything with the words “exfoliating”, “brightening” or “enzyme” with an almost comedic level of caution, but this one feels very cool, comfortable and soothing.

Not many products will make me leave the house in the dead of night wearing only a pair of pants, a parka and some old slippers, but after I realised the other night (as I was doing my grooming faff) that I had left the Tidal Cream in the office I became rather frantic and – despite the fact I had about seventy billion night creams lined up on the windowsill to test – it became imperative that I fetch the Cream of Dreams.

My love for this cream is twofold: firstly, it’s incredibly hydrating. To the point where my skin – I think – actually looks more plumpsome* as well as feeling it. You know when you meet those people who look – quite literally – like a “picture of health”? And their skin is almost waterlogged, as though someone’s left a mini hose-pipe running just beneath the surface and you wonder whether, if you touched it, it might sort of wobble, like a waterbed? Sunday Riley’s Tidal Brightening Enzyme Water Cream didn’t quite make my skin wobble with water, but it was just about as hydrated as it could possibly be.

The other thing I love is the brightening effect – and there really was one. I just looked…better. More refreshed. I’m putting that down to the “enzyme” part of the show – the cream contains papaya enzymes to “resurface” – which appears to be rather powerful despite the lack of tingle. Good Genes (same brand) is out for me, during pregnancy – mostly because it smells like old cat wee, but also because it requires an industrial strength fan to stop my face from combusting, such is the tingle – and I did wonder whether Tidal was doing much in comparison. But the results are inarguably good – fresher face, plumper in the cheek area and even where the eyes are usually slightly sunken-in around the socket area.

The cream also contains what is touted as being a relatively powerful skin-lightener and alternative to  hydroquinone – Alpha Arbutin. I’m not overly familiar with this area as I’ve never had any real skin pigmentation issues, but it adds up that the inclusion of this ingredient result in quite a noticeable brightening effect over time.

So there’s my two cents on the Tidal Cream: a comfortable, fresh gel-cream moisturiser that will delight those who want maximum hydration with minimum grease, who want instant exfoliating and resurfacing effects as well as a more long-term brightening of the skin. Though I’ve recently got back into using facial oils on a regular basis (and have been a serum devotee for years) this cream is a brilliant one-pot wonder. It works if I just slap it on quickly after cleansing, nothing else added, and that – for someone who quite often falls into an exhausted sleep-coma before they’ve managed to even get their feet under the duvet – is priceless.

*I’m moving away from the word plumptious for a short while, due to overuse. It needs a lie-down. Rather like me, really.