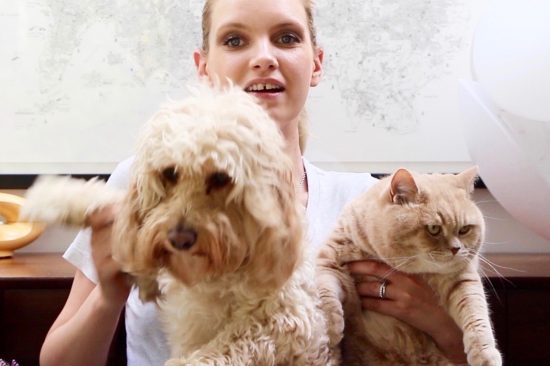 Here it is, better late than never: a video of my pets. Dexter and the Bear. It should be Mr Bear, really, but that doesn’t have quite the same ring to it! What a rigmarole it was, trying to get them both behave for the camera – when the dog wasn’t licking the cat, the cat was licking the dog and when neither of them were licking something, they were after the packet of Dreamies I’d hidden underneath me for emergency bribes.

Most of you, if you’re regular readers, will know Dexter the dog (he’s a Cockapoo, which is a cross between a poodle and a cocker spaniel) and Mr Bear (a British Shorthair cat) but I don’t think they’ve ever been in a video together. Certainly not recently. When I was filming, I couldn’t think of very many exciting things to say about them, but as I was editing the video I suddenly thought of two questions that I knew everyone would ask:

Rather than film an entirely new video addressing these points I thought I’d stick a couple of explanatory paragraphs into the Youtube description box, but to save you having to click through I’ve reproduced my little Q&A here.

Q) How do the dog and cat get along together? Did you have to introduce them in a special way?
A) They get on really well but we introduced them very slowly, first with the puppy in the kitchen for a whole week and then letting them smell each other through a baby gate. We didn’t leave them alone, unattended, for a good few months. There were a few little scraps at first, but then we went back to separating them and slowing down the introduction again, and this worked perfectly. They co-exist very peacefully!

Q: How did the pets react to a new baby?
A: Again, they all co-exist very well, though the baby isn’t walking yet so that could produce new issues! The dog wasn’t very jealous, neither was the cat, but I think that perhaps they are particularly laid back animals?!

Sorry, I’ve just realised that my second answer is particularly unhelpful to those worrying about pets and babies. Lots of people hassled me about the pets when I was pregnant, saying that I’d end up giving away the dog (what?) and that the cat would lie on the baby and suffocate him/her. A lot of this fear stems from ignorance, I think, and I must say that most people commenting didn’t have pets themselves. So I took it with a pinch of salt, but on the flip side, I had done lots of reading online about how to minimise disruption both for the animals and human family members. Luckily, everything went without a hitch – as I say above, perhaps I have particularly laid-back pets, or maybe it’s the fact that we tend to think things through to make sure they feel happy and secure… I don’t know. I’m no animal expert, I just do a lot of reading!