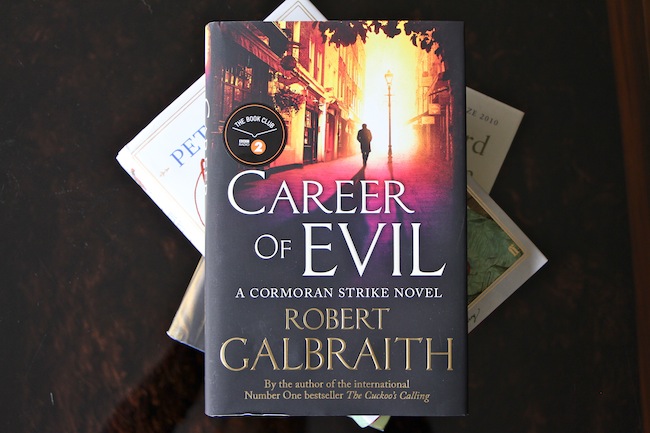 Strike Two: my second illness of the season. First I had Mastitis, then yesterday I picked up a funny little tummy bug. It seems to have gone now, but it was terribly intense while it lasted! (I reckon it was the sausages I ate on Friday night, personally, but Mr AMR says it can’t be because he had the same. What he doesn’t realise is that he literally has a stomach lining made of steel and nothing , absolutely nothing, can upset it.)

Strike Three: the third Cormoran Strike book from Robert Galbraith, Career of Evil. I had the hardback on pre-order, so keen was I to read it, but then realised that I needed the Kindle version, because if I turn on the light to read during the middle-of-the-night feed then the baby wakes up properly and all hell breaks loose! I really enjoyed the first two Galbraith novels (we all now know it’s JK Rowling, but there are no wizards and spells here – more grisly deaths and swearing ex-army detectives) and can’t wait to get cracking with this one. I’ve just finished The Unlikely Pilgrimage of Harold Fry (so-so, a bit moral for my current mood!) so will download the Kindle version this evening. Mr AMR can read the hardback at the same time. The race is on… You can buy Career of Evil here – the hardback is currently £9.