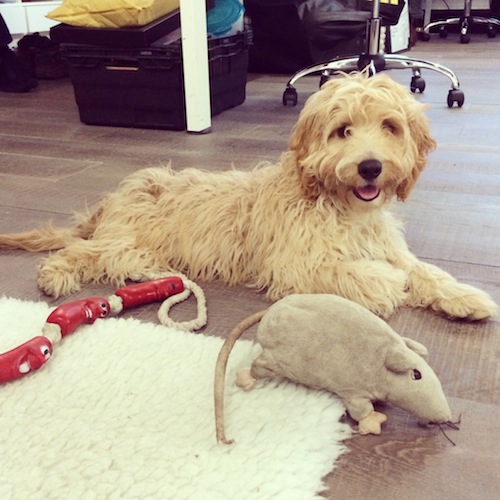 Forgive the random pet post, but this whole dog-owning business is new to me and I feel that my steep-learning-curve-experience requires at least some minimal documenting. And yesterday was a bit of a first: travelling with a puppy into central London. I’ve never had to be responsible for anyone in central London, let alone a small and unpredictable thing such as a puppy! It was an unavoidable trip; Mr AMR was taking photos of very important people and couldn’t have a mad dog bouncing about all over the place and I couldn’t move my engagements. So into town we went, Dexter and I, armed with poo bags (glam), a stuffed rat, a string of rubber sausages and a bag of dog food in my coat pocket.

It was incredibly strange having to think about another living being apart from myself; I’m used to dashing about and cutting things fine and hopping into taxis if I’m running too late. With puppy, I had to think ahead and take his little pottering legs into consideration – and do you know what? I really enjoyed it! It was quite lovely having a little blonde shaggy thing trotting along beside me as I went about my day; I slowed down and took things in, I appreciated my surroundings, I didn’t scowl at people who were dithering at busy pedestrian junctions. (I don’t know whether you’ve realised this, but I’ve been trying to be a lot more “mindful” recently. To slow down my thoughts, reduce my stress levels and to think about the present rather than worrying about things that I can’t control. I don’t want to sound hippy dippy, but you’ll probably hear me refer more and more to some of the changes that I’ve made to my life over the past six months or so. I’m on a drive to really get a good life balance going on, and if you’re interested in hearing more about this then I’m happy to share. Let me know.)

Things that weren’t so good about having puppy in tow:

1) Poo. He didn’t poo on the train and for that I am eternally grateful. Where he did poo was right in the path of four very handsome men in suits who were, I assume, off to lunch. As I bent down to pick up the poo with the little plastic sack, my heavy shoulder bag swung around and almost knocked me off balance and then my scarf unravelled and ALMOST DROPPED IN THE POO. There was an audible gasp from the men and then a look of pity as I managed to scoop the poop and regain my balance. Dexter then tried to eat the sack of poo. It was emotional. I tried to style it out but as I pranced to the nearest bin the wind blew the whole of my hair across my face so that I was effectively rendered blind and I nearly broke my leg falling down a curb.

2) Thing number two: the time it took to get ready. It takes me approximately eight minutes to get out of the door if I’m alone- most of this time is taken up by me finding my keys, finding an umbrella that has all of its spokes, re-finding my keys that I’ve put down in the coat cupboard and then trying to locate my Oyster card. With a dog, it took me twenty-five minutes. (Mostly because I was so fearful that he might do a poo on the train.) How do people with children –  and MULTIPLE CHILDREN! – get anything done? I had to return to the house three times for various bits of dog paraphernalia including a length of kitchen roll (you never know when you might need some), a food bowl and a furry bed thing.

3) I can’t think of a third thing, actually. My day was made infinitely more pleasurable by having Deter in tow. On the train on the way home he was so worn out from all the excitement (the girls at Gleam Digital looked after him for a few hours and he thoroughly enjoyed all of the female attention!) that he curled up inside my coat and fell fast asleep.

I have no idea why I’m blathering on about this – overshare in the extreme, probably. I’m feeling a bit done in with beauty stuff this week, I suppose; I’ve been catching up with testing stuff and sorting out products and I feel as though my brain is sick of processing information about skincare ingredients and trying to differentiate between thirteen identical coral lipsticks. Hey-ho, back to beauty tomorrow, maybe. Oh hold on, no! It’s all about tea tomorrow. Look forward to that one. Stick the kettle on.