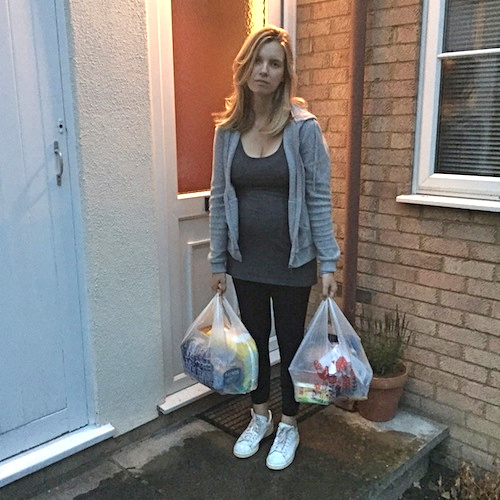 It was bound to happen at some point. That terribly awkward “when are you due?” situation. A question that is fine if you’re pregnant, but really quite soul-destroying if you’re not.

My own “situation” has just happened at the Tesco pharmacy counter, of all places. The poor pharmacist. I think that after I walked away from the counter he may well have turned to the wall and thumped his head against it a few times. I was after Strepsils for treating a spot of man-flu (not mine, the man’s, obviously) and the pharmacist paused before saying:

“You do realise that you can’t take these ones when you’re pregnant?”

I could have just said “oh, they’re not for me”, which was true and also would have saved us both the humiliation. But one of my personality flaws is that I’m really, really crap at lying  – and even if I haven’t directly lied, I do this weird thing where I overexplain and give detail that simply doesn’t need to be given.

“I’ve actually had the baby,” I said. The pharmacist looked mortified and so I quickly tried to make things better for him by being overly jolly and smiley, even though I was literally dying inside.

And then he said (WHY? JUST LEAVE IT AND LET ME PAY!) “how old is your baby?”

And I said, because I was so embarrassed about my fake-pregnancy-gut and for some insane reason didn’t want him to think that I was being lazy on the exercise front,

A week old! What a bleeding lie! And a bad one, because what new mother would say “a week or so?” You’d know your baby’s age to the hour. A “week or so!”

Oh God. I had to have a little moment in the freezer aisle. To be fair on the poor sod, it was an incredibly easy mistake to make. I was wearing the sartorial equivalent of a sausage skin; grey lycra leggings and a weird kind of long vest thing over high-waisted, thick pants. It’s the kind of garmenting that I imagine a medieval knight might have worn underneath his armour. Whatever; lots of lumpy-bumpy going on there to draw the wrong conclusions from. And added to that there are my huge, veiny mammaries that look as though they weigh around seven kilos each.

I took the multi-save pack of Cornettos back out of the shopping basket pretty sharpish, let me tell you.