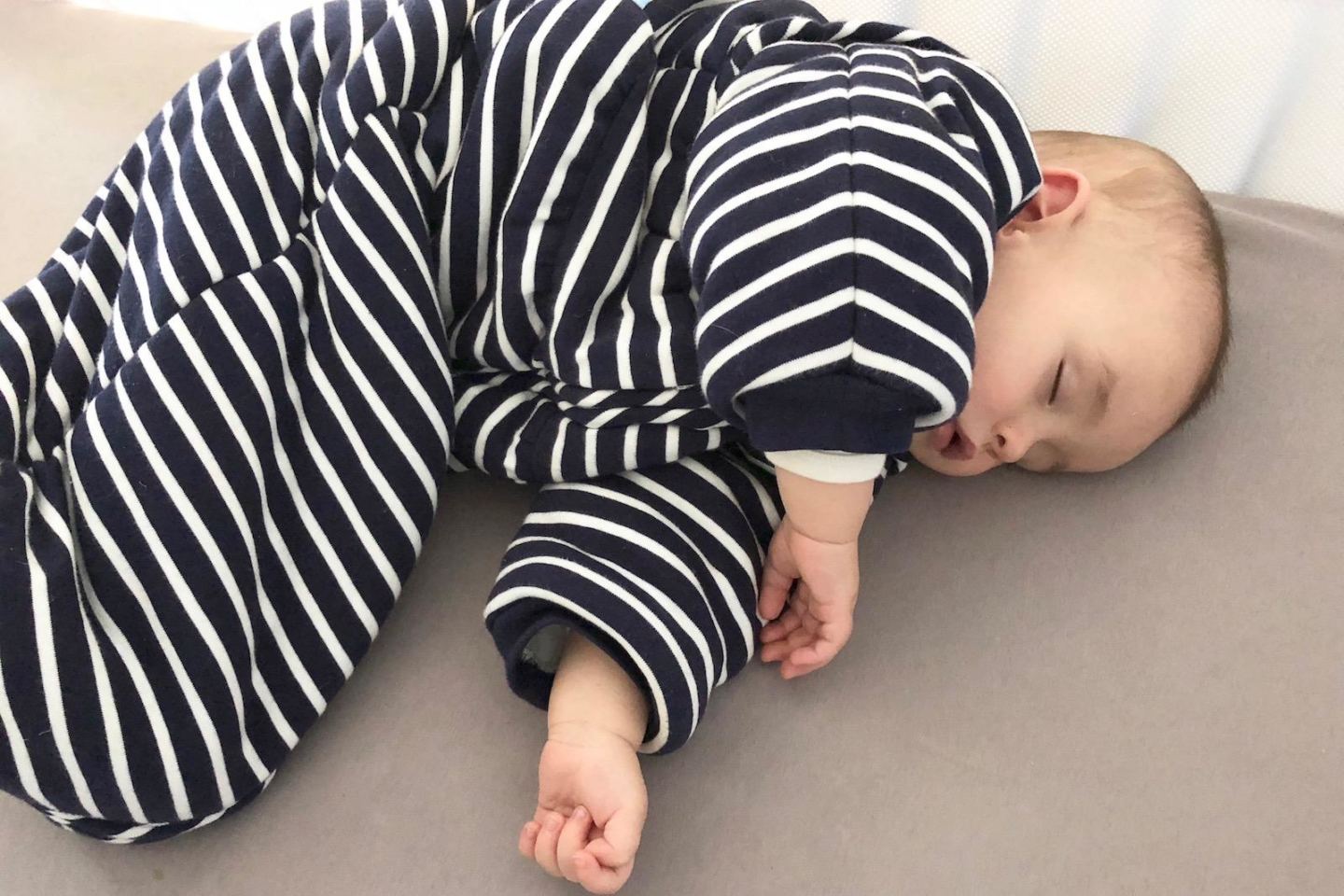 I’ve just been reading a post I wrote when Angelica was tiny; How I Got My Baby To Sleep Through The Night.

Goodness, she was a piece of cake in comparison to Ted! And I was at the end of my tether then, feeding every couple of hours through the night. Luckily Angelica was an easier fix – once she was in her own room and in more of a routine, the sleeping just started to happen. Not so this time around – we’ve had to employ harder tactics.

It’s funny how quickly you forget things that you did with one baby when you have another – things that would actually be rather useful to reflect upon, so that you didn’t do them again. (Maybe that’s a whole other post?) Really, I should have known that getting Ted into a routine earlier would have been handy, and addressing the fact that he was eating half of his calories through the night could have been done a lot earlier, to save all of this hassle now…

Anyway, too late now – here we are, eleven months in, and Ted is still pretty random with his night wakings, sometimes up three or four times for a feed, other times wide awake for an hour or more, which is perhaps the more frustrating type of sleep interruption. We’ve never had a whole night of sleep with Ted – not even from, say, 11pm until 6am. But I have to say that since I instigated the changes listed below, things have started to dramatically improve.

I’m loathe to say that they’ve worked, because a) they haven’t and b) I always jinx myself when I write about minor successes, but there’s definitely a sort of positive trend going on, despite a few terrible nights dotted about, including the one in which Ted wet through his nappy and his sleeping bag and threw up formula on the spare sleeping bag, all in the space of around three hours.

Here’s what I’ve been doing.

Cribbed from a Mumsnet thread about Gina Ford, though I have no idea what the rest of the Gina Ford routine entails. It was just a way of getting some timings down on paper and feeling as though they had some credibility or success behind them. We follow them pretty loosely, to be honest – too loosely, probably, and the timings that we’ve ended up adopting (below) aren’t even the ones I originally wrote down. I’m sure we’d have more luck if we were a bit stricter and followed the timings religiously, but we’re simply not that organised and never will be. So it’s wake up at 7/7.30am (ideally, though now and then Ted wakes up at 6.30, which is basically not on – who the hell needs to be up at that sort of hour?!) and then breakfast at 7.45am until about 9am, because it takes so bloody long for them both to pour cereal over the floor and rub jam in their hair. Milk and a nap for Ted at around 10am, but a SHORT nap, say 30 minutes, and then lunch for both of them at about 12.30pm.

The most marvellous thing about this routine is that both Angelica and Ted have the same main nap. From 1-3pm. It was supposed to be 12.30-2.30, but we never manage to get lunch done in time. Whatever: two hours of complete freedom to get things done! It’s amazing!

Then snack, play, dinner, bath, reading, milk, bedtime at 7pm. Angelica mostly sleeps right through until around 7.30am/8am (and always has done) and Ted has started, gradually, to wake less and less. Perhaps because of…

We realised that Ted was drinking far too much formula at night. He shouldn’t really have been drinking any formula at night, but when I stopped breastfeeding him during the night, because I was so knackered, we stupidly swapped it for the bottle. Big mistake. HUGE! He was never really taking much of a breastfeed at night, it was more for comfort (hello! Rod for own back, anyone?) and so we basically began rewarding his night wakings by giving him a hugely calorific meal! Idiots. The things you do when you’re totally sleep deprived and desperate to get back to bed…

To cut back on the formula, we started making the bottles weaker – by the time we were putting only four scoops of powder into 7oz of water, he just didn’t want to know, and gradually he seemed to stop being so hungry throughout the night. I think if we’d try to go cold turkey then it would have been really stressful, but this way seemed to just confuse him a little whilst giving him at least something in his tummy to get him back to sleep.

Now we’re aiming at NO formula through the night at all. Last feed, if he wakes for it, at around 11pm, but Angelica wasn’t having that at his age, so I feel as though he can make it through without it! Yes, he screams, but we have started to address the crying too, with…

OK, I’m going to admit that I haven’t actually researched this controlled crying thing properly. I saw a few things on Google when Angelica was a baby, and I’ve added to this mountain of dubious knowledge with various bits of anecdotal material, both from the comments here on the blog and experiences of friends and colleagues and so on. The gist of it seems to be that if you always give in to a baby crying, when they have no reason to cry other than they’re not getting their own way, you’re basically rewarding them for crying. With cuddles, with whispers, with a breastfeed or a bottle or whatever it is that you do to get them back to sleep. They need to be able to get themselves back to sleep without you, so that you don’t have to get up five bazillion times a night and almost walk into the doorframe because you’re so tired.

It’s absolutely awful having to listen to a baby cry, but this is what we did: crying for ten minutes, then into the room to put a hand on the baby’s chest and rock him slightly to reassure him, then leaving him to cry again for ten minutes. We’ve given in quite a few times on this one, mainly because I can’t cope and break to easily, but if you pick him up then he laughs and immediately stops crying, so he is definitely playing us! Out of all of the changes, this is the one that I am most ready to persevere with, despite it being the most difficult.

And perseverance is key with all of these things, isn’t it – so far nothing has provided a magic fix, and a couple of nights have been more terrible than ever, but I know that these changes all make sense and together they HAVE TO WORK. (Positive thinking! I’m doing a sort of Jedi mind-trick with this. It will work. Use the force.) With Angelica, I found that creating the right atmosphere worked – her own room, a bedtime routine, etc – but I think things have been stepped up a gear for Ted. Perhaps because we left it for too long, and I do think that multiple house moves and unsettling events have affected matters, but it’s definitely more challenging. As ever, I shall keep you updated!

May The Sleep Be With You.

Sidenote: the chunky, plumpy sleeping bag in the top photo was sent from Jojo Maman Bebe and it’s amazing. A 3.5 Tog, for those of you with old, cold houses! It has arms, but you can detach them. Personally I think that the arms are brilliant – Ted is just so toasty warm in this and I’m sure he’s sleeping a little better now that he’s more snug. I’m going to do a separate post on his room and cot set-up, so stay tuned for that – you can find the Cosy Sleeping Bag here online. It’s £35.)