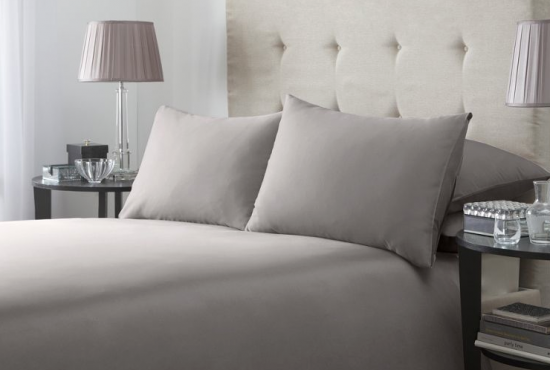 I’m big on bed linen. I didn’t used to be, but when I bought my first house I had a bit of a “linen epiphany”. I went through the bin-bags filled with sheets and duvet covers and I realised that half the stuff was of such terrible quality it was good for nothing more than tearing up to make dusters. A total false economy, when I looked at how many “duvet sets” and “3 for 2 on fitted sheets” packs I’d bought.

Roll on seven years and another house move and I can tell you, categorically, that the best ever bed linen I’ve ever invested in* has been from a range called Hotel Collection at House of Fraser. Thus called because it’s the type of linen used in the best hotels; 500 thread count, which has this thick, almost satin feel. The fitted sheets are about three times the weight of a normal sheet bought from IKEA or wherever, the duvet cover needs a crane to lift it into place. This is some serious, serious bed covering.

Now before you die of fright at the price of this Hotel Collection stuff, let me say this: I never buy it full price. It goes into the “Blue Cross Sale” pretty much every time (which makes me think, does anyone ever buy it full price?) and I for the last couple of years I’ve steadily been replacing the linen for the bed and for the spare bed with this 500 thread count stuff. Fitted sheets start from about £25 each for a double (it’s £51 a pair) and the “usual” price (again, sceptical) is £170. If you have a bed the size of a small village, as Mr AMR insists upon having, things do get a little steeper, but I think that in the long run I’ve actually saved quite a lot of money. The linen washes well and doesn’t seem to deteriorate – it’s miles better quality than any other bed linen I’ve bought, including some extremely posh brands.

FYI: I have’t tried the “Dobby Stripe” or “Satin Stripe” versions, just the plain 500TC, so I can’t vouch for any other variations. I buy everything for my bed in either “slate” or “grey” and the spare bed is about to get a bit of an overhaul with some cream and white linen. I’m not sure how long all of this is in the sale for, but if you miss it, I’m quite confident it’ll be back into the reduced price section before too long. It seems to be a bit like the wine in Tesco that’s always reduced from £12.99 to £6.99. Have you ever seen it at full price? Nor me!

You can see all of the linen that’s in the sale here – you need to do a bit of browsing in order to find the size and colour you want, but I promise it’s worth it. Oh, by the way, don’t be tempted to do that “order online then pick up in store” thing with this linen – I made that mistake last time and almost did my back in carting the package back from town! Just get it delivered.

*I’m sure that many of you have your own opinions on what the best bed linen is – pray share. Let me know in the comments below!